Jack Shafer suggests that people should get over their need for “safe spaces” on the opinion pages of the New York Times.

The initial shock came in April, when Bret Stephens, a refugee from the Wall Street Journal opinion pages, took up residence at the Times, bringing with him his contrarian views on climate change. The Guardian spoke for injured readers everywhere with a piece headlined “NY Times Hired a Hippie Puncher to Give Climate Obstructionists Cover.” The inevitable Change.orgpetition calling for Stephens’ sacking went up, gathering tens of thousands of signatures, and Times reporters and editors savaged him on Twitter.

It is interesting that he chose to start his defense of having diversity represented on the opinion pages of the New York Times by using Bret Stephens as an example. As David Roberts wrote about that decision back in May: “It takes a particular sort of insularity to hire a pro-war, anti-Trump white guy as a contribution to diversity on the NYT editorial page.”

But it’s even worse than that. Roberts summarizes with this:

Stephens called climate change a “mass hysteria phenomenon” for which “much of the science has … been discredited.” He said that people who accept climate change science are motivated in part by the “totalitarian impulse” and they worship “a religion without God.” He said“global warming is dead, nailed into its coffin one devastating disclosure, defection and re-evaluation at a time.” In a column calling climate change one of liberalism’s “imaginary enemies,” he said this: “Here’s a climate prediction for the year 2115: Liberals will still be organizing campaigns against yet another mooted social or environmental crisis. Temperatures will be about the same.”

As Romm notes, the idea that temperature will be the same in 100 years is utterly ludicrous, the scientific equivalent of claiming the earth is flat.

The distinction that Shafer failed to make is that the NYT didn’t hire an editorial writer with different opinions, they hired someone who rejects facts. Climate science is not a matter of opinion. If Stephens accepted climate science, but simply had different opinions on what we should do to combat it, I doubt that anyone would have objected.

But that’s not the world we’re living in at the moment. Facts are being treated as a matter of opinion where “both sides” are being given a forum for debate. That gives free reign to liars who want to insure that we are continually distracted and divided. This morning I ran in to an egregious example of that on twitter. 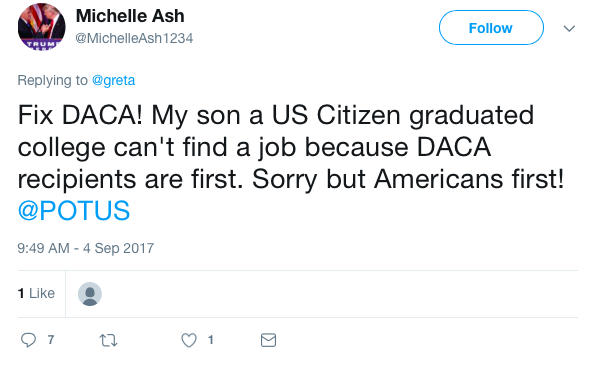 It is very possible that the twitter user is a bot. But they are spreading ugly lies that fuel what some have called the “politics of resentment” and a lot of people believe that nonsense. When an attempt is made to debunk the lies, it becomes a matter of opinion. Would the NYT think that it is merely a matter of diversity to hire someone who writes that DACA young people got free college and are first in line for jobs?

That paper’s motto right now is, “Truth: It’s more important now than ever.” And yet, they promote things like this: 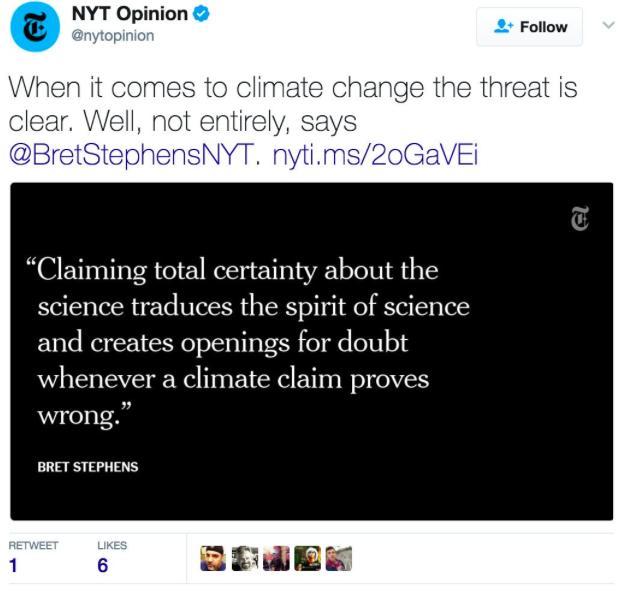 What is required from journalism right now—including opinion pages—is a sorting out of the difference between opinions and facts. When we clear that up, we can have a robust discussion about the former based on the latter. To do otherwise is to allow the lies to flourish.