The Virginia Governor’s election is less than two weeks away, and here is Republican Ed Gillespie’s latest ad:

Take a moment to imagine a Virginian who would be motivated by that ad to vote for Gillespie. The “clear choice” he is presenting is between someone who has talked about removing monuments to the Confederacy and one who would keep them. In what way does any of that affect the daily lives of the people of Virginia? It doesn’t. That ad is nothing more than an attempt to foster division and fan the flames of racism. Of course, this is nothing new for Gillespie. We’ve already seen how several of his ads make the whole Willie Horton episode look like child’s play.

Here is what recent polling results have looked like for the race between Gillespie and Northam: 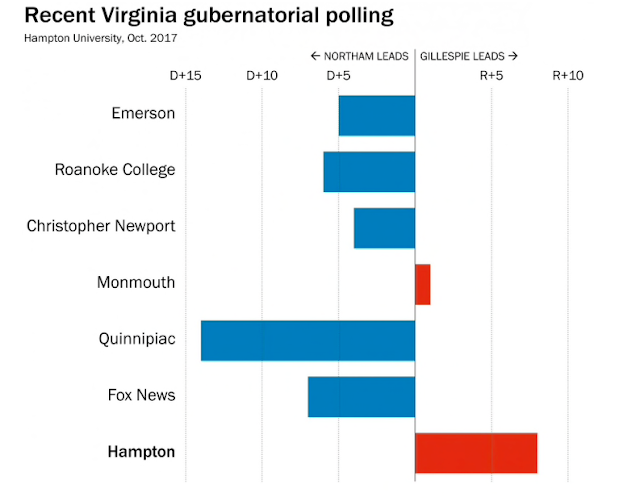 While that latest poll from Hampton University that was released yesterday is certainly cause for concern, Philip Bump tells us why we shouldn’t freak out about it.

Instead of asking respondents who didn’t indicate a choice between Northam and Gillespie who they preferred, those respondents were simply listed as “don’t know.” The result is “don’t know” ended up getting more than a quarter of the vote…

Hampton’s done this before, and its polling has been similarly questionable as a result.

As is always the case, it is best to look at the polling averages. Right now the conservative-leaning RCP has Northam ahead by almost 4 points.

If you’d like to see the kind of campaign Ralph Northam is running in these last days of the campaign, take a look at the ad he released on the same day Gillespie’s campaign put out the one above.

Let’s all hope that the voters of Virginia are more interested in health care for every family than they are in efforts to sow division and hate.