I figured that I’ll be keeping an eye on the election results throughout the evening, so why not do it together. I’ll post updates as I see them. Put yours in the comments and I’ll add them as appropriate.

Here’s my favorite tweet of the day that became a meme:

And here’s some music that is appropriate for the day while we wait for the polls to close.

6:35 pm – This is something I’m hearing from a lot of people about the Virginia election results. So it’s probably worth keeping in mind.

The most GOP parts of Virginia report early and the most Dem parts report late. So don't freak out if Gillespie is up most of the night.

7:04 pm – Polls have closed in Virginia. Here’s a link to the NYT live election results and estimates for the governor’s race.

7:37 pm: I’m hearing a lot of rumblings like this in the VA governor’s race results:

Gillespie has just a nominal lead in Chesterfield with half counted. He probably needed to win by like 10 points. This may not be close.

Northam is running an average of 7.6 points ahead of where Clinton performed last year. https://t.co/LkqQTEnn9D

8:20 pm – This race was less of a nail-biter in the polls, but still hugely important.

Medicaid expansion is winning in early returns in Maine, and it's not close.

8:58 pm: This is what everybody’s watching now:

BREAKING: Democrats are IN THE LEAD to pick up the VA House of Delegates. They've picked up 12 GOP seats & currently lead in 6 (!!!) more. Whoa.

This is a tidal wave.

The first hints of a 2006 wave came when Democrats took back control of the Virginia Senate in 2005. Was first Southern legislative chamber to flip back to the Democrats

Meanwhile, there’s this word from the night’s biggest loser:

Ed Gillespie worked hard but did not embrace me or what I stand for. Don’t forget, Republicans won 4 out of 4 House seats, and with the economy doing record numbers, we will continue to win, even bigger than before!

10:12 pm: It’s time for me to call it a night, but I’ll leave you with this. The folks at Daily Kos elections created a big board to track the major races today. Here it is with their latest updates: 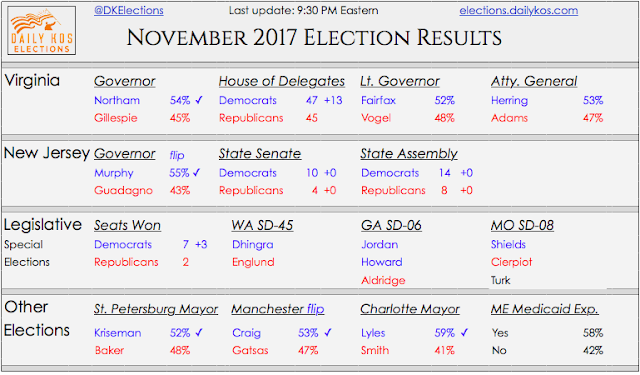 It looks like we won’t know much about some of these races until tomorrow. The House of Delegates in Virginia might be up for grabs – but some of the races could be decided by recounts. The possibility of a Democratic majority was unthinkable going into today. So this has been an absolute blow-out beyond our wildest expectations.

Sleep well, America. There is hope on the horizon.