I loved what Martin wrote the other day about how he’s not sorry that he couldn’t imagine a Trump victory. It expressed exactly how I feel. I remember telling some of my nervous friends in the lead-up to the 2016 election that the same country that elected Barack Obama—twice—would never elect Donald Trump. Oh how wrong I was, at least when it came to the electoral college.

Over the last year my optimism about the direction of our country took a near-fatal blow. I’m not completely over that yet. But Tuesday sparked some hope.

This morning I’m thinking about the residents of Charlottesville, Virginia. As you may recall, their city became the epicenter of the growing threat of white nationalism that has been welcomed into the White House. Not only did our president hire people like Steve Bannon, Steve Miller and Sebastian Gorka, when their supporters gathered in Charlottesville and actually killed a counter-protester, he sanctioned their cause. That might have been one of the lowest points in this deplorable presidency so far.

But take a look at how the people of Charlottesville responded yesterday.

Ralph Northam got 84% of the vote in Charlottesville.

Its residents clearly didn't think there were "very fine people on both sides."

In Charlottesville, raw votes cast were up 31%.

Rather than join in the fear mongering or retreat from engagement, the people of Charlottesville went to the polls and let their voices be heard—in huge numbers. Given the events of the last year, it is hard to interpret that as anything other than an overwhelming repudiation of the white nationalism that attempted to assert itself in their city. Bravo for the people of Charlottesville!

The response in other parts of Virginia was similar. I’ve read and written about the numbers. But thanks to the Maddow Blog, we now have a visual that captures what happened in a way that words and numbers can’t. 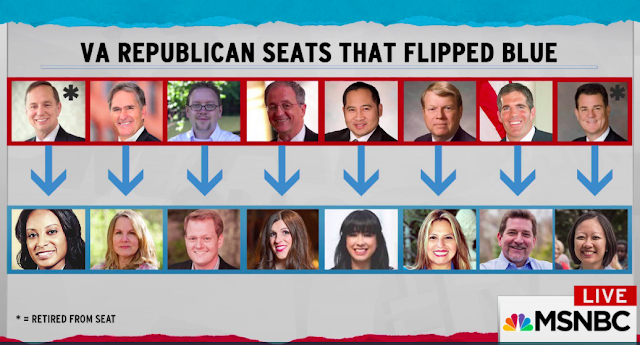 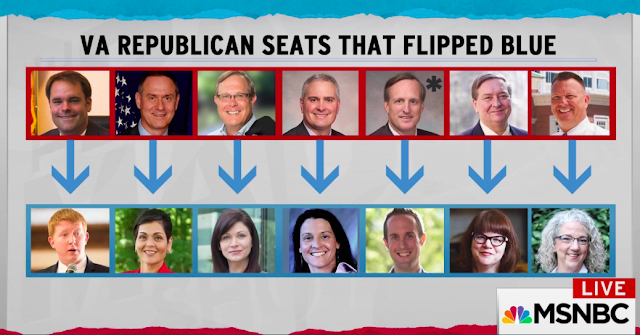 In response to the white male nationalism being espoused by this administration and its supporters, the Virginia House of Delegates, a state that was once part of the Confederacy, just took a step towards looking more like the future of leadership in this country.

I understand that is threatening to people who still have an investment in the status quo of the white patriarchy. We’re going to have to struggle against how they manifest that fear for a while. What is at stake in that struggle is whether our democratic republic will weather this storm and continue the promise of a government of, by and for the people, as opposed to a government of, by and for white males.