NEW YORK – A few days after headlines exploded about yet another university president suspending Greek life activities after yet another hazing death, a group of college presidents sat around a dinner table expressing concern about bad behavior at fraternities.

But somehow, they couldn’t help singing their praises as well.

Fraternities foster a sense of belonging. Their members do community service and care about social welfare. They boost retention and graduation rates. They raise money for charity and provide vast alumni job networks. They add value to the college experience. It’s wrong to generalize from a few bad actors.

These rationalizations for Greek life on campus came up during last week’s annual gathering of presidents of mostly large public universities and journalists at the Penn Club, organized by Arizona State University. Guests included Louisiana State President F. King Alexander, who presides over a campus reeling from the death last month of 18-year-old freshman Maxwell Gruver.

Over dinner, LSU President Alexander noted that he’d immediately suspended Greek life after Gruver’s death and set up a task force to study it, but at the time, he’d made sure to add a supportive statement: “Many of our Greek organizations represent all that is good about our university.” At the dinner, he acknowledged that “there are bad actors…but I know what good they [fraternities] do and I value what they do. You can’t generalize and say Greeks aren’t doing good things.”

It’s getting harder to appreciate the good. Reports of the events leading to Gruver’s death at LSU are sickening: During a night of drinking at the Phi Delta Theta house, which has since been shuttered by the national chapter, Gruver was reportedly ordered to recite the Greek alphabet, pelted with hot sauce and mustard and forced to chug hard liquor if he messed up.

Gruver died at a nearby hospital with a blood alcohol level of .495, more than six times the legal intoxication level in most states. Ten students have since been charged with hazing at LSU, and one with negligent homicide. Two more fraternities have since been suspended for infractions, six have been removed from campus and seven are on some form of probation.

Greek organizations own $3 billion in real estate on eight hundred U.S. campuses, while their leaders raise more than $20 million a year.

Hazing horrors and their accompanying headlines are becoming relentless. Just one week after the college presidents’ dinner, sophomore Matthew Ellis, who was pledging the Phi Kappa Psi fraternity at Texas State, died after attending an initiation event; the fraternity had already been under investigation by the university. That same day, I watched the parents of 19-year-old Beta Theta Pi pledge Timothy Piazza, a sophomore engineering major at Penn State, sob in front of television cameras at a news conference. Authorities had just released a previously deleted video revealing that their son had been given 18 drinks in 82 minutes, before falling down a set of stairs and fracturing his skull. 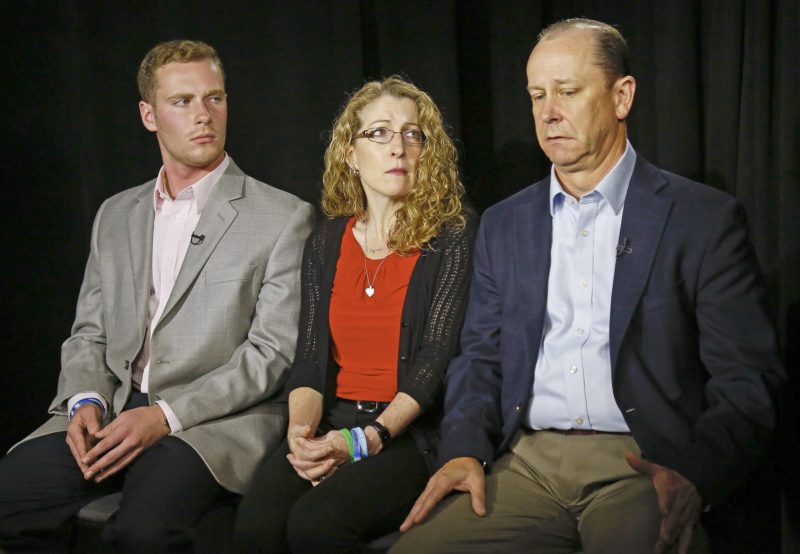 In this May 15, 2017, file photo, James Piazza, right, seated with his wife Evelyn, center, and son Michael, left, holds back emotions while discussing the death of his son, Penn State University fraternity pledge Tim Piazza, during an interview in New York. A preliminary hearing is set to resume Thursday, Aug. 10 for members of Penn State University’s now-shuttered Beta Theta Pi fraternity chapter, accused in the Feb. 4 death of 19-year-old Tim Piazza, of Lebanon, N.J., after a night of heavy drinking. () Photo: AP Photo/Bebeto Matthews, File

“They left him to die alone,” James Piazza said. Seventeen former Beta Theta Pi members face numerous charges, including involuntary manslaughter and aggravated assault, and as of Monday, five other Beta Theta Pi members now face legal consequences. James Piazza and his wife Evelyn have repeatedly spoken out and – unlike some college presidents – they aren’t equivocating.

I went back to look at remarks Penn State University President Eric Barron made after the first grand jury indictments last May. He condemned the incident, but included praise, noting that “all indicators suggested Beta Theta Phi was a model fraternity – the house, privately-owned and situated like all other fraternity houses on private property, was beautiful, the subject of a multi-million dollar renovation; both the Beta alumni and the national organization provided strict rules of behavior; and, the brothers had a no-alcohol policy which stated that anyone caught drinking would be expelled.”

All benefit of the doubt was gone by Monday, when additional charges were announced; a university statement noted that disciplinary process was underway for “32 individuals related to the tragic death of Timothy Piazza.”

Related: The realities of being black at one Texas University

As the mother of two college students whose schools don’t have fraternities, I’ve had no need to warn my sons about their dangers but I hope other parents will hear the Piazzas. I’d also suggest reading Bloomberg News reporter John Hechinger’s scathing new book “True Gentlemen: The Broken Pledge of America’s Fraternities.” Had I not read it, it might have surprised me to hear a group of college presidents taking such a cautious defense of fraternities after so many recent hazing tragedies.

James Piazza, father of Timothy Piazza, who died during a hazing

Hechinger’s book helps explain how college presidents struggle to beat back the “unholy trinity,” of drinking, misogyny and racism at fraternities, where one of six men who attend a four-year college in America belong. Fraternity alumni are often big donors who offer job and networking pipelines to former members.

Hechinger – whose late father Fred Hechinger was an education editor at The New York Times and is the namesake of The Hechinger Report – points out that “Greek organizations own $3 billion in real estate on eight hundred U.S. campuses,” while their leaders “raise more than $20 million a year.”

College presidents “have reason to fear for their jobs,” when they take on fraternities, Hechinger writes; they may find themselves “confronting a determined adversary that is well-financed, politically connected, and capable of frustrating the most dogged investigators.”

Case in point: In 2013, former Trinity College president James F. Jones announced he would step down a year earlier than expected, under fire from alumni who withheld donations and threatened a lawsuit after Jones banned pledging, cracked down on alcohol and pushed for co-educational pledge classes at the Hartford, Conn., campus.

Related: There’s only one university where this fraternity belongs and that’s Trump University

Meanwhile, the list of recent hazing horrors seemingly grows. (Professor Hank Nuwer at Franklin College in Indiana keeps a database that goes back to the 1960s.) Last spring, four young menpleaded guilty to voluntary manslaughter in the death of 18-year-old Baruch College freshman Chun Hsien Deng, who was blindfolded, forced to wear a backpack weighted with sand, pushed to the ground and knocked out. Earlier this fall, a University of Oklahoma student suffered a brain injury during hazing.

“Many of our Greek organizations represent all that is good about our university.”

And just last week, Florida State announced it would suspend Greek life, after the death of 20-year-old Pi Kappa Phi pledge Andrew Coffey, a junior engineering student from Georgia who was found unresponsive at an off-campus residence after a night of drinking at the Phi Delta Theta house.

The national chapter has since revoked the frat’s charter, and Florida State President John Thrasher shut down Greek activities indefinitely at 55 fraternities and sororities. Coffey’s family supports Thrasher’s efforts and thanked him, but his strong stand has led to a backlash from parents: Thrasher recently told the Chronicle of Higher Educationthat some parents had accused him of ruining their children’s cultural life by shutting down Greek life. Thrasher added in an interview that he was “flabbergasted” during Parents Weekend when he saw parents drinking shots with students – some of whom appeared underage – at a local bar.

When college presidents can’t stem the horrid hazing, we have to hope that students step in. That’s what happened earlier this month at the University of Michigan, when a student-led council suspended Greek activities after multiple allegations of sexual misconduct, hazing, hospitalizations and drug use, including a ‘Champagne and Shackles’ event, where dates at a party were handcuffed to each other until they finished a bottle of champagne.

John Hechinger says colleges can do more to reform and hold fraternities accountable, starting with “collecting and making public any information about alcohol-related hospitalizations associated with local chapters.”

In the meantime, listen to parents like Evelyn Piazza, grieving for her shy, athletic, red-headed son Timothy, at a Penn State news conference on Monday.

This story was produced by The Hechinger Report, an independent news outlet focused on inequality and innovation.