* Steve Benen picked up on something that is going to come as a big surprise to an awful lot of people. It starts with this statement from Trump during his meeting with House Republicans yesterday.

Trump thanked party leaders, expressed optimism about the Senate bill, and said he believed that Congress ought to move to “welfare reform” after completing the tax bill, according to several members in the room.

Benen explains that “welfare reform” means something different to this president than most people assume. He’s not talking about making changes to the TANF program, as happened during Bill Clinton’s presidency. Instead, what welfare reform means to this president was telegraphed when John Harwood interviewed Gary Cohn.

HARWOOD: Are you thinking that you’ll deal with that Social Security/Medicare/baby boomer retirement issue later by entitlement reform that reduces benefits?

COHN: Look, the president on the economic front laid out three core principles. Number one was [regulatory] reform, number two was taxes and number three was infrastructure. We’re working our way methodically through [regulatory] reform, taxes and infrastructure. I think when he gets done with those, I think welfare is going to come up. That’s our near-term economic agenda right now.

Benen writes, “Note how ‘welfare’ came in response to a question about social-insurance programs like Social Security and Medicare.” If he’s right, that would be yuuuuuge.

* At today’s press briefing, Sarah Huckabee Sanders was asked whether it would be fair to investigate Trump for sexual misconduct, given that Sen. Al Franken will be investigated.

.@PressSec to @CeciliaVega on difference in response to allegations of sexual misconduct against Al Franken and Pres. Trump: "Senator Franken has admitted wrongdoing and the president hasn't." pic.twitter.com/MzcfyExi0B

Of course Sanders says “no,” the president shouldn’t be investigated. When asked to explain the difference between the two situations, she said that Franken had admitted wrongdoing and the president hasn’t.

Imagine what that kind of approach would mean if generally applied. If the accused admits guilt, he is investigated. But if he denies the allegations and says that his accusers are lying, he gets a pass.

* I’m going to assert a point of personal privilege and talk about something that really has me pissed off. Cameron Joseph talked to former Minnesota Senator Norm Coleman about the allegations against Al Franken.

The man that Sen. Al Franken (D-MN) defeated in his 2008 race told TPM Friday that one of the closest Senate races in history likely would have gone his way had Franken’s sexual harassment been public at the time.

“You’ve got to believe that photo is worth more than 312 votes,” former Sen. Norm Coleman (R-MN) told TPM Friday morning, highlighting the exact margin of his 2008 loss to Franken a day after newscaster Leeann Tweeden came forward to accuse Franken of sexual misconduct in 2006 — and included photo evidence.

Cameron goes on to say that Coleman is right, “he would have remained in the Senate if the accusations against Franken had come out before the election.” I’m not here to dispute that.

But what is missing from all of that is what most Minnesotans know, but hasn’t been reported. Ever since he ran against Wellstone in 2002, it has been common knowledge in this state that Norm Coleman has a long history of sexual harassment. I have spoken directly to one of his victims myself. It was the talk of the town in 2002. A reporter I knew at the time who worked at the largest daily newspaper in the state told me that every media outlet in the state had the story. But since no one was willing to go on record with an accusation, they didn’t publish anything.

So it goes both ways Mr. Coleman. If women had been willing to tell their stories, your sorry ass would have never filled the seat occupied by Paul Wellstone – even before you got beat by Franken.

* This video of a tense exchange between Senators Sherrod Brown and Orin Hatch over the Republican tax cut bill is the talk of the town today.

Tense moment between Sen. Brown and Sen. Hatch after Brown says GOP tax cut is "for the rich." Hatch responds: "Don’t spew that stuff on me" pic.twitter.com/57zEA03a6b

* I mentioned earlier that one of the signs of a possible blue wave in 2018 is the generic ballot. Harry Enten wrote that when it comes to predicting the national House vote, the generic ballot is “about as accurate as the final national presidential polls before a presidential election.” In case you’re interested, FiveThirtyEight has a generic ballot tracker. As I write this, it shows Democrats at +11, which exceeds the +8 that David Wasserman says would indicate a wave election.

* This time next week we’ll all be trying to recover from turkey tryptophan (just kidding, I know its a myth). But that means that we’re heading into the heart of the war on Christmas. Of course, Fox News is already on it with a story about how the hands in the upper left corner of this Starbucks holiday cup are “lesbian.” 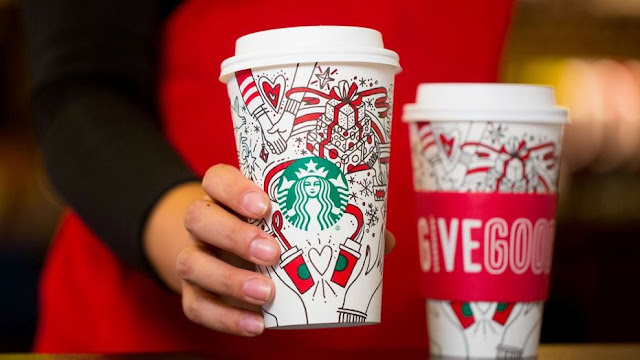 * Finally, one of the things I hope to do this weekend is watch the HBO documentary “Baltimore Rising.”