Free, openly licensed course materials, or open educational resources, have transformed a handful of colleges and many more college courses. Students in those classrooms don’t have to pay for once-expensive textbooks. Digital OER are free. Printing costs, when compared to infamous textbooks, are negligible. 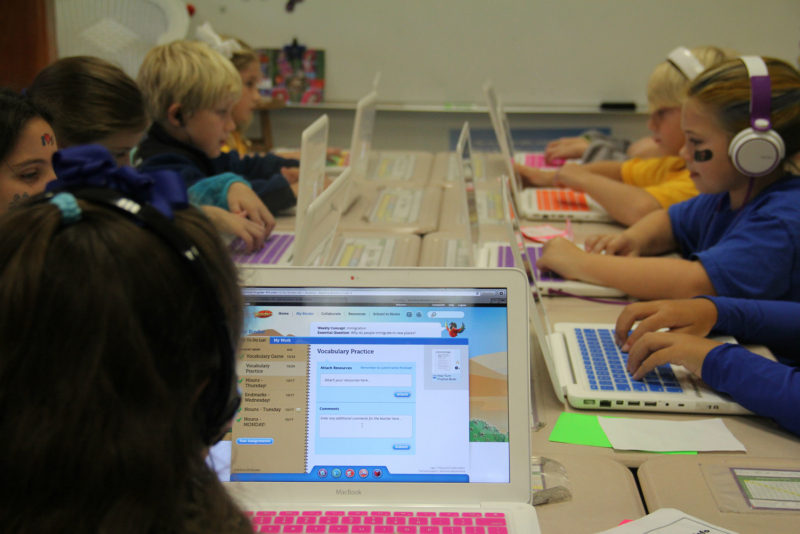 In K-12 schools, however, where open educational resources have been hailed as an opportunity to democratize high-quality curriculum and break the publishing oligopoly, OER has had a slower uptake. There’s a lot of buzz around OER in schools and districts, but actual practice hasn’t reached systemic levels.

Most school districts now say that open educational resources are part of their overall curriculum-selection strategy; fully 80 percent of IT leaders responding to the Consortium for School Network’s latest survey on the topic said this was the case in their districts.

“They’re quite optimistic about OER,” said Keith Krueger, the CEO of CoSN, a professional association for school district technology leaders.

But results of the Obama administration’s push to get school districts to embrace OER through the #GoOpen initiative reflect the slow pace of real transformation. Only about 100 districts joined the initiative – out of the nation’s more than 14,000 – and only a couple dozen said they met their pledge to replace one traditional textbook for one course with an OER alternative within one year.

OER appears in schools, as supplemental material mostly, but it isn’t even close to breaking the reliance on traditional, proprietary texts.

That likely comes down to the way curriculum purchasing happens in school districts.

“Teachers are underpaid to stand and deliver, much less to develop their own curriculum or piece it together using OER parts online.”

On college campuses, instructors have long designed their courses using cobbled-together sets of books and other materials. In most cases, they decide what they want to teach and how best to teach it. In K-12 schools, administrators are the ones ordering curriculum materials, and they look for whole-course options that already align with state standards. The standards, after all, determine state tests, and performance on state tests plays a large role in whether schools are deemed failing. Teachers generally don’t have the time or, in some cases, the capacity, to choose all their own materials, even if most of them supplement a district’s textbooks with things they find elsewhere.

Larry Singer, CEO of Open Up Resources, a nonprofit that aims to marry the best of traditional K-12 publishing with the promise of OER, says that teachers aren’t paid to do the curriculum selection work of college instructors.

“Teachers are underpaid to stand and deliver, much less to develop their own curriculum or piece it together using OER parts online,” Singer said. And districts, he added, don’t want to cobble together a course plan using one free lesson here and one free unit there, no matter how high-quality.

Open Up Resources is one of the few organizations producing whole-curriculum options that also happen to be openly licensed. Singer expects its model could greatly increase the use of OER in schools.

While there has been some governmental investment in creating openly licensed, free curricula – including the widely popular Engage NY – it has been limited. And the perception of OER is still that it’s only good for supplemental, one-off materials. Much of the philanthropic investment for open resources has gone to curation tools to help teachers identify the best of this broad pool.

Open Up Resources, which started out as the 13-state OER Collaborative, claims to offer Common Core-aligned math and English language arts curriculum materials for kindergarten through 12th grade. (Its middle school math curriculum is currently under review by EdReports which assesses quality and standards alignment and has found, particularly in math, that many curricula are lacking.)

Based on surveys of superintendents, Singer is convinced it’s the standards-aligned content that districts are truly after, not the price tag.

“It turns out that OER is a ‘by-the-way’ benefit,” Singer said, “only after they’ve determined that it’s the highest-quality curriculum that they can find.”

This story was produced by The Hechinger Report, a nonprofit, independent news organization focused on inequality and innovation in education. Sign up for our newsletter.

Tara García Mathewson is a Boston-based freelance reporter who specializes in education news for print and online media outlets. Find her online at taragm.com.