A lot has been happening in the world of politics lately, so some of you may not have noticed that Barack Obama has been traveling around the globe as part of his foundation’s efforts to encourage citizen engagement. However, in the underbelly of Trumpworld, folks have been paying attention. Here’s the first item from a leadership forum in India that sent them into a rage:

In a discussion period at a leadership forum, the former president was asked about his wife Michelle’s comments this week during a speech in Toronto, when she said it was not a good idea to “tweet from bed,” an obvious commentary on Trump’s early morning Twitter habit.

“Michelle was giving the general idea . . . don’t say the first thing that pops in your head. Have a little bit of an edit function,” he said. “Think before you speak, think before you tweet.”…

On the subject of climate change, Obama described the Paris agreement to limit carbon emissions as giving children a “fighting chance,” although “we have a little bit of a pause in American leadership.”

Lou Dobbs went apoplectic on that one.

Consider my mind blown. Since when is advice to think before you speak or tweet the least bit controversial—much less cause to send the marshals out to get you? Dobbs ends his rant by asking whether or not there is a law that former presidents shouldn’t be attacking sitting presidents. According to some people on Facebook, apparently there is. 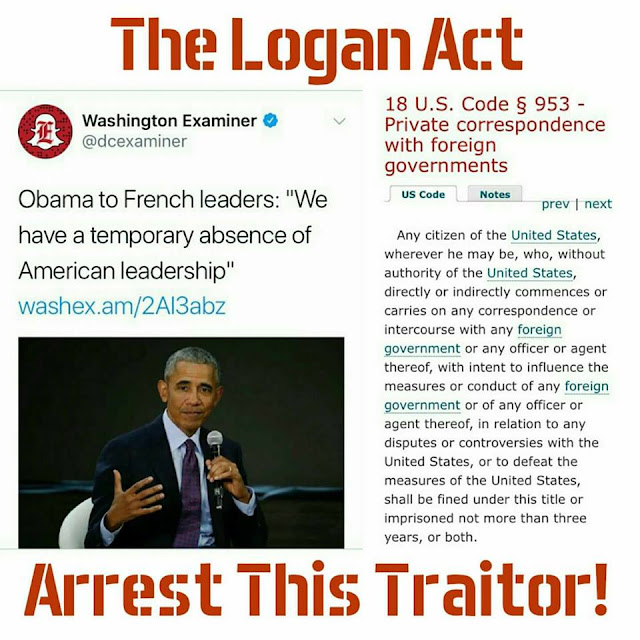 In case you were wondering, that was posted on Monday, the same day that there was a lot of talk about whether Michael Flynn violated the Logan Act. Coincidence? You tell me.

After returning from his trip abroad, Obama gave a speech at the Chicago Economic Club. When a man like him starts talking like this, it’s beyond time to pay attention.

He argued that such things as the speed of technical change and the uneven impact of globalization have come too quickly to be absorbed in many cultures, bringing strange new things and people to areas in which “people didn’t (used to) challenge your assumptions.” As a result, “nothing feels solid,” he said. “Sadly, there’s something in us that looks for simple answers when we’re agitated.”…

The danger is “grow(ing) complacent,” Obama said. “We have to tend to this garden of democracy or else things could fall apart quickly.”

That’s what happened in Germany in the 1930s, which despite the democracy of the Weimar Republic and centuries of high-level cultural and scientific achievements, Adolph Hitler rose to dominate, Obama noted. “Sixty million people died. . . .So, you’ve got to pay attention. And vote.”

Of course the same people who, when Obama was president, questioned his citizenship and assumed he was a Muslim in league with the terrorists lost their marbles over that one.

Obama’s implication that Trump represents a threat to democracy or even the lives of American citizens and that the situation in the country is akin to 1930s Nazi Germany is clearly demented.

What amazes me is that, even as Obama’s term in office is over, these people can’t let go. Perhaps because they spent eight years demonizing the man, it simply became a habit. But I actually think its more than that. For authoritarianism to flourish, it needs an enemy. Neither Trump nor his supporters can be content with winning. They need someone to play the villain in their drama. Until Democrats nominate their next leader in a presidential candidate, that role will be played by Hillary Clinton and Barack Obama. All either one of them has to do is open his or her mouth and the conspiracy theories will fly.