JACKSON, Miss. – Nothing President Donald J. Trump said or did during his controversial visit to the newly opened Mississippi Civil Rights Museum on Saturday changed how Delorise Love felt about its wrenching exhibits of lynchings, mob violence and unfettered racism.

“What I saw today? It hurts my heart,’’ said Jackson resident Love, after taking her 14-year-old daughter, Alicia, and 10-year-old son, Josh, through an opening day tour of the state’s violent, racist past.

They watched vivid videos, glanced at Ku Klux Klan regalia and saw nooses that lynched hundreds of blacks during the Jim Crow era. “It’s very important for them to know that it was not easy here in Mississippi,’’ Love said. “It’s very hard to see. It blows your mind.”

Love’s impressions are exactly why the long-anticipated museum represents an important victory for education in the Magnolia State, where the state-funded, state-sponsored memorial to Mississippi’s still-painful legacy of racial oppression is clearly on display. Too many people I’ve spoken with over the years in my work reporting on Mississippi for The Hechinger Report say they’ve never been to the state and have no desire to go, in part because of its horrific history.

Now, at a time when our country is more divided than ever, and when school districts are still illegally ignoring federal desegregation orders, the state has given all Americans an opportunity to come to Mississippi and reflect on our dark and not-so distant past.

The Mississippi Civil Rights Museum is a reason to go — and to learn. Change can’t happen without knowledge.

“I came because my cousin’s story is here, and I have been waiting for a moment like this when the truth can be told”

Visitors to the museum on Saturday didn’t hear Trump’s brief, carefully curated remarks, which were delivered during a private ceremony that followed a quick tour of the museum. Groups of protestors gathered outside the museum, shouting: “No Trump, no hate, no KKK in the USA.”

Nor did they hear from invited speakers, including civil rights hero and  Democratic Congressman John Lewis, of Georgia; he and several other politicians boycotted the opening because of Trump’s visit, noting that the president’s “hurtful policies are an insult to the people portrayed in this civil rights museum.”

Ultimately, though, Trump’s visit and the boycotts proved far less significant than what legions of civil rights veterans, schoolchildren and their parents actually saw on opening day of both the civil rights museum and the adjacent Museum of Mississippi History, as evidenced by the pain etched on their faces. Many sobbed openly. 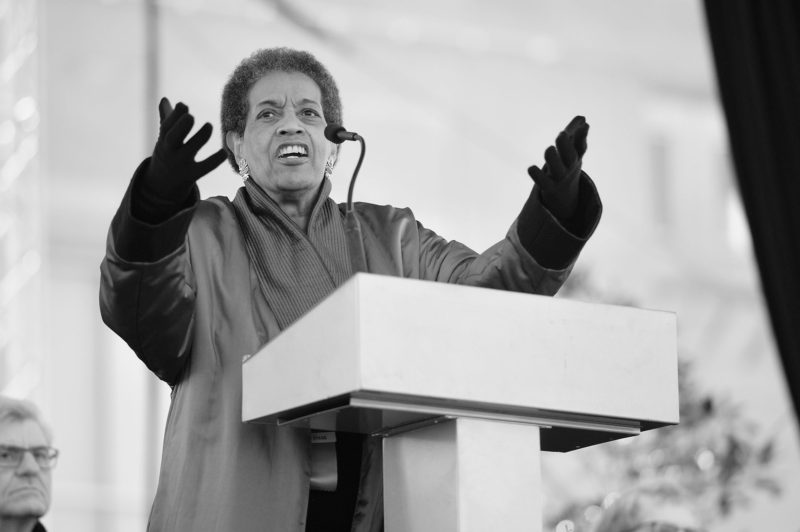 “I wept because I felt the blows, I felt the bullets, I felt the tears,’’ speaker Myrlie Evers, the 84-year-old widow of slain NAACP member Medgar Evers, told the crowd gathered outside the museum in the snowy courtyard for opening ceremonies.

Trump’s last-minute visit, at the invitation of Republican Gov. Phil Bryant, also didn’t dampen former Democratic Gov. William Winters’ enthusiasm for the opening. The anti-segregationist is known for passing Mississippi’s most sweeping education reforms in 1980, including compulsory school attendance and kindergarten for all.

“I have looked forward to this day for a very long time,’’ Winters said, noting that he will soon turn 95. “We have gone through some very tough times…these museums challenge all of us to have a better understanding of where we are from.”

Inside the museum, though, many visitors said they didn’t want politics to interfere with the powerful feelings evoked by installations such as “This little light of mine,’’ an elaborate fabric structure that was part of an exhibit accompanied by the gospel song often sang at rallies by voting activist Fannie Lou Hamer.

“I came because my cousin’s story is here, and I have been waiting for a moment like this when the truth can be told,” said Wheeler Parker, who makes a brief appearance on a bicycle in a video narrated by Oprah Winfrey that tells the story of the murder of his 14-year-old cousin Emmett Till.

Parker, now 78 and a pastor living outside of Chicago, had accompanied Till to visit family Mississippi for the summer of 1955. The teenager’s lynching and mutilation shortly after they’d arrived, said Parker, “changed my whole life.’’ 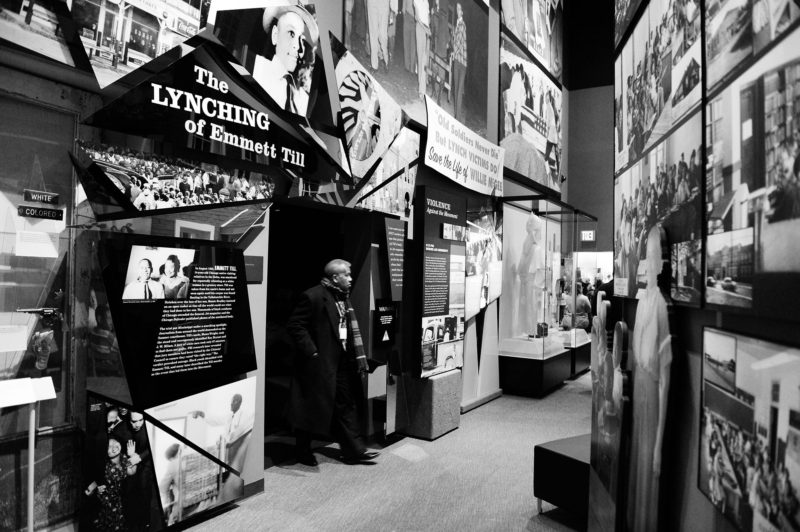 Parker watched the video in an exhibit room that included the doors of Bryant Grocery Store, where Till entered on Aug. 4, 1955, and was accused of flirting with a white woman, although she later acknowledged she had made false claims. The sheer brutality of the incident and the subsequent acquittal of his killers by an all-white jury became a pivotal event in the U.S. Civil Rights movement.

Parker said the museum accomplished what he has wanted to do his whole life: “Tell the story. Let us see what history was like.”

Ashley Walker of Jackson held her four-year-old daughter, Ava, on her lap during the visit, while they watched historic footage, including the iconic image of the burned station wagon that had belonged to slain civil rights workers James Chaney, Michael Schwerner and Andrew Goodman being dragged from a pond near where they went missing, in Neshoba County, Mississippi.

It had all happened long before Walker, 27, was born, during so-called Freedom Summer, when legions of Northeastern college students descended upon the state to register blacks to vote.

Related: Next generation of activists confront Mississippi’s violent past on Freedom Summer Anniversary

Ava squirmed and held tight to her mom, and even if she didn’t understand what she saw, Walker was glad she’d taken her daughter. “It’s not affecting her now but as she gets older, she’ll read more and learn more,” Walker said. “It’s important to learn the history.”

The museum also shines in its dedication to teaching and to improving education in Mississippi, where segregation is still a way of life and where student academic performance still lags behind the rest of the country.

Related: The anonymous town that was the model for desegregation in the civil rights era

The exhibits include a replica of a one-room school house with an interactive chalkboard showing how much more money the state has spent on white students than on black students. There’s also recent data detailing the state’s legacy of segregation and its efforts to resist change. 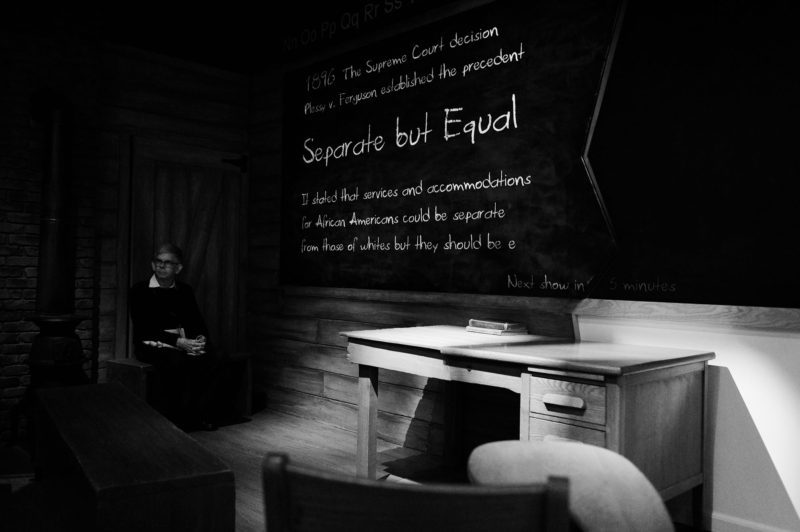 Related: Getting beyond hatred and bitterness will improve education in Mississippi

I was heartened to find a new vehicle for teaching about civil rights, something the state has not done well. An investigationby The Hechinger Report and Reveal from The Center for Investigative Reporting found a lack of training, instruction and resources available for teaching civil rights in Mississippi.

More good news for education in the state was delivered during the opening speeches, when La June Montgomery — president of the W.K. Kellogg Foundation (which is among the numerous funders of The Hechinger Report) — said the foundation would pledge an additional $1 million to the museum’s endowment so that generations to come “will be inspired by the authentic narratives.”

Every ninth-grader in the state is expected to get a chance to visit the museum, which comes with explicit warnings about “offensive images and language.”

The visits — and the sheer honesty of the exhibits — represent a huge victory for Mississippi, said Jake McGraw, public policy coordinator for the William Winter Institute, who has closely followed the drawn-out battle that culminated in the state’s agreement to build not one, but two memorials under a single roof.

“What’s hardest for us to do in Mississippi is to hold a mirror up to ourselves and see ourselves clearly,’’ McGraw said, adding that after touring, he had “never felt prouder of this state. This museum didn’t seek to hide anything. We didn’t seek to varnish it.”

Love agreed; she had told her children stories about the state’s violence, but nothing compared to what they saw and heard. “It’s very, very hard to see,’’ she said. “But you have to see it.”

This story was produced by The Hechinger Report, an independent news outlet focused on inequality and innovation.