* Back in 2002 Ruy Teixeira and John Judis wrote, “The Emerging Democratic Majority,” which argued that demographic trends over the next several decades were set to heavily favor the Democratic Party. It all looked very prescient when the Obama coalition emerged, but major questions arose with the election of Donald Trump. Recently, Judis wrote that they were wrong and suggested that it was time to redo the math. But Teixeira stuck to his guns. Based on recent wins for Democrats last month and yesterday in Alabama, Ron Brownstein weighs in with something that sounds an awful lot like the original argument made by Judis and Teixeira.

Roy Moore was a uniquely flawed and vulnerable candidate. But what should worry Republicans most about his loss to Democrat Doug Jones in Tuesday’s U.S. Senate race in Alabama was how closely the result tracked with the GOP’s big defeats last month in New Jersey and Virginia—not to mention how it followed the pattern of public reaction to Donald Trump’s perpetually tumultuous presidency.

Jones beat Moore with a strong turnout and a crushing lead among African Americans, a decisive advantage among younger voters, and major gains among college-educated and suburban whites, especially women. That allowed Jones to overcome big margins for Moore among the key elements of Trump’s coalition: older, blue-collar, evangelical, and nonurban white voters.

This was the same equation that powered the Democratic victories in the Virginia and New Jersey governors’ races. The consistency of these results suggests that Democrats are coalescing a powerful coalition of the very voters that polls have shown are the most disenchanted, even disgusted, by Trump’s performance and behavior as president.

That points to a clear near-term threat in 2018 for Republicans. It also crystallizes the risky long-term trade Trump is imposing on his party: He is improving the GOP’s standing among groups that are almost all shrinking in the electorate, at the price of alienating groups that are growing.

* Philip Bump shared some data on the groups that are shrinking as well as the ones that are growing. 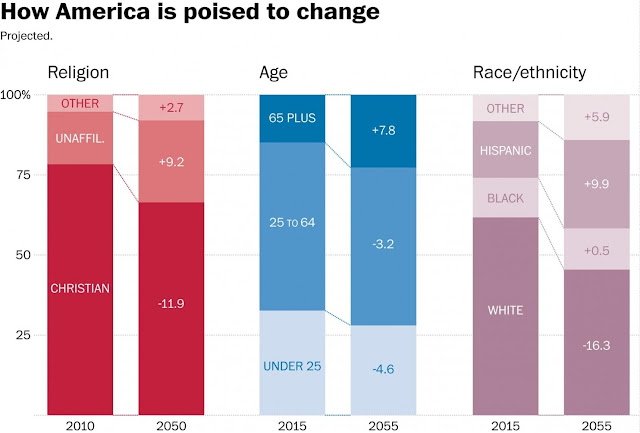 Using data from Pew Research and the Census Bureau, we put together this look in 2015 at how the country will change by 2050.

Older — but less white and, importantly, less religious. In other words, it will in significant ways look much less like the voters who supported Roy Moore than those who supported the Democrat, Doug Jones.

* To those who suggest that the DNC needs to change, I would say that it already has.

The DNC’s work in Alabama included over 1.3 million phone calls, 1 million text messages to voters and volunteers, and 325,000 door knocks, according to the official. In addition to distributing a mailer focused on voting rights, the national committee’s forces also organized vans to deliver college students to voter registration offices and then to the polls.

DNC Chair Tom Perez says all of the $1M the cmte spent on Alabama went toward African American and millennial turnout.

* It wasn’t that long ago that Steve Bannon was being hailed as the new Pied Piper of the Republican Party. Regardless of whether he deserved the title, the insurgents in that party were clearly dominant in their civil war with the establishment. Yesterday’s defeat of Roy Moore has reignited the establishment – like the editorial board at the Wall Street Journal.

Roy Moore’s defeat shows that Steve Bannon is for losers…

The Alabama result shows that Mr. Bannon cares less about conservative policy victories than he does personal king-making. He wants to depose Mitch McConnell as Majority Leader even if it costs Republicans Senate control. GOP voters, take note: Mr. Bannon is for losers.

* Speaking of editorial boards, someone lit a fire under the folks at USA Today.

With his latest tweet, clearly implying that a United States senator would trade sexual favors for campaign cash, President Trump has shown he is not fit for office. Rock bottom is no impediment for a president who can always find room for a new low.

…as is the case with all of Trump’s digital provocations, the president’s words were deliberate. He pours the gasoline of sexist language and lights the match gleefully knowing how it will burst into flame in a country reeling from the #MeToo moment.

A president who would all but call Sen. Kirsten Gillibrand a whore is not fit to clean the toilets in the Barack Obama Presidential Library or to shine the shoes of George W. Bush.

* I’m sure there are a lot of great stories to be told about what happened in Alabama yesterday. But here’s my favorite so far:

This is Patricia Gaines, whose father, a liberal minister, was driven out of Selma in 1961 by Klansmen on horseback. She went back to Selma for the first time today to drive black voters to the polls. pic.twitter.com/A6q8JDtDg9

* Finally, this song goes out to Doug and Louise Jones, who celebrated their 25th wedding anniversary yesterday.