As political scientists write about the signs that point to the possibility of a blue wave in the 2018 midterms, the data point most often used is the so-called “generic ballot,” where people are asked whether they would vote for a Democrat or a Republican if the election were held today. According to FiveThirtyEight, the polling average on that question yesterday stood at Democrats +12. 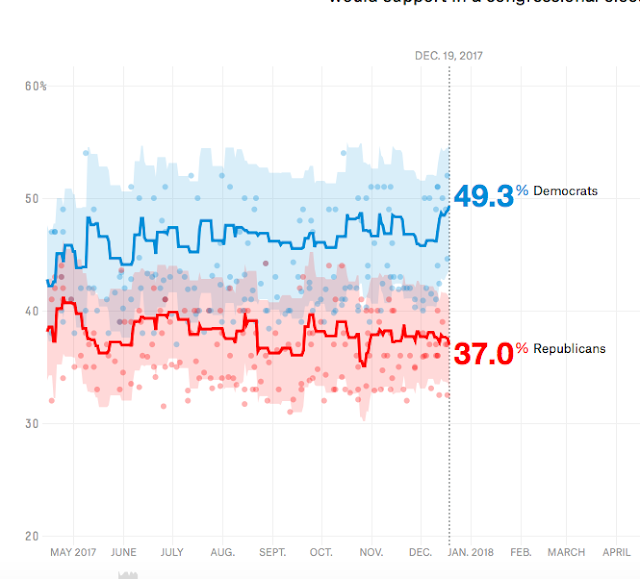 Keep in mind that David Wasserman of the Cook Political Report has calculated that Democrats need a +8 score on the generic ballot in order to win a majority in 2018.

This week Rachel Maddow came up with another data point that is worth taking a look at.

You might want to pause that video at around the 1:45 mark to study the chart she is using. The data so far on first-time Democratic House candidates is truly mind-boggling! Maddow zeros in for comparison purposes on the number of candidates who filed in 2009 to run in 2010—where the Republicans had almost a 2:1 edge. As she mentions, the result was that Republican picked up 63 seats for a 49-seat majority.

But you might want to also go back and take a look at what was happening in the lead-up to the 2006 midterms. It was the flip of what happened in 2010. Democrats had a 2:1 advantage and wound up gaining 30 seats.

Along comes 2017 in preparation for next years midterms and, at this point, Democrats have a 5:1 advantage. Since we haven’t seen that kind of number anywhere in recent history, it’s hard to know what it means. But there’s no doubt that it’s huge.

In most states, the filing deadlines are still open. So the September numbers Maddow has complied are not complete yet. But in Texas, the deadline has passed, so that state provides us with a good idea of what’s coming.

In deep-red Texas, Republicans will have to fight for every seat in Congress during next year’s midterm elections. For the first time in 25 years, Democrats are running in all of Texas’ 36 congressional districts, according to documents filed with the Texas Secretary of State’s office…It is a departure from 2016, he says, when eight Republican-held congressional seats went uncontested by Democrats…

Let me be clear about what this data does and doesn’t tell us. No one is saying that any of these data points guarantees a blue wave in 2018. The election is eleven months away and a lot can (and will) happen over the intervening months. What this data tells us is that the signs right now are pointing to a blue wave. Beyond that, having Democratic challengers in deeply red districts doesn’t mean that Democrats will win those races. But not having someone on the ballot guarantees a Democratic loss. Finally, this rush of new candidates tells us that in communities all over this country people are rolling up their sleeves and getting involved—which is how waves are created.