Since Trump tweeted his threats to North Korea that basically boiled down to “my button is bigger than yours,” concerns about his mental unfitness for office have surfaced once again. Annie Karni brought us this information:

In private meetings with more than a dozen members of Congress held on Dec. 5 and 6, Lee briefed lawmakers — all Democrats except for one Republican senator, whom Lee declined to identify. Her professional warning to Capitol Hill: “He’s going to unravel, and we are seeing the signs.”

In an interview, she pointed to Trump “going back to conspiracy theories, denying things he has admitted before, his being drawn to violent videos.” Lee also warned, “We feel that the rush of tweeting is an indication of his falling apart under stress. Trump is going to get worse and will become uncontainable with the pressures of the presidency.”

As Martin noted yesterday, the release of excerpts from Michael Wolff’s book have only heightened these concerns. James Hamblin, medical reporter for the Atlantic, eschews any attempt to provide a mental health diagnosis of the president, but questions whether or not he might have a neurological disorder. He points to several behaviors that raise that concern. The first is captured by these two images that occurred during speeches by the president: 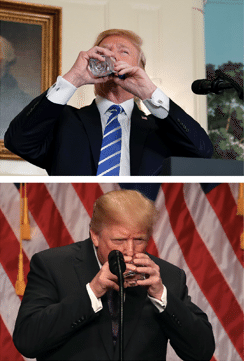 After age 40, the brain decreases in volume by about 5 percent every decade. The most noticeable loss is in the frontal lobes. These control motor functioning of the sort that would direct a hand to a cup and a cup to the mouth in one fluid motion—in most cases without even looking at the cup.

Next was Trump’s slurred speech during his remarks about Jerusalem.

But even more significantly, Hamblin points to the work done by Sharon Begley to document changes in Trump’s speech patterns over the last couple of decades.

In interviews Trump gave in the 1980s and 1990s (with Tom Brokaw, David Letterman, Oprah Winfrey, Charlie Rose, and others), he spoke articulately, used sophisticated vocabulary, inserted dependent clauses into his sentences without losing his train of thought, and strung together sentences into a polished paragraph, which — and this is no mean feat — would have scanned just fine in print. This was so even when reporters asked tough questions about, for instance, his divorce, his brush with bankruptcy, and why he doesn’t build housing for working-class Americans…

Now, Trump’s vocabulary is simpler. He repeats himself over and over, and lurches from one subject to an unrelated one…

For decades, studies have found that deterioration in the fluency, complexity, and vocabulary level of spontaneous speech can indicate slipping brain function due to normal aging or neurodegenerative disease.

People want the border wall. My base definitely wants the border wall, my base really wants it—you’ve been to many of the rallies. Okay, the thing they want more than anything is the wall. My base, which is a big base; I think my base is 45 percent. You know, it’s funny. The Democrats, they have a big advantage in the Electoral College. Big, big, big advantage … The Electoral College is very difficult for a Republican to win, and I will tell you, the people want to see it. They want to see the wall.

This is probably why Trump has avoided doing press conferences. But his alternative of sitting down for an interview with the New York Times only intensified the questions.

His comments are, by turns, incoherent, incorrect, conspiratorial, delusional, self-aggrandizing, and underinformed. This is not a partisan judgment — indeed, the interview is rarely coherent or specific enough to classify the points Trump makes on a recognizable left-right spectrum…

Whatever the cause, it is plainly obvious from Trump’s words that this is not a man fit to be president, that he is not well or capable in some fundamental way. That is an uncomfortable thing to say, and so many prefer not to say it, but Trump does not occupy a job where such deficiencies can be safely ignored.

Perhaps in response to these concerns, the White House came up with a different strategy during yesterday’s press conference.

That only served to make matters worse. One has to wonder why the president would have to tape remarks rather than simply walk across the White House and address reporters directly.

All of this points to a constitutional deficiency that was noted by Jimmy Carter back in 1994.

After Reagan’s diagnosis [of Alzheimer’s], former President Jimmy Carter sounded an alarm over the lack of a system to detect this sort of cognitive impairment earlier on. “Many people have called to my attention the continuing danger to our nation from the possibility of a U.S. president becoming disabled, particularly by a neurologic illness,” Carter wrote in 1994 in the Journal of the American Medical Association. “The great weakness of the Twenty-Fifth Amendment is its provision for determining disability in the event that the president is unable or unwilling to certify to impairment or disability.”

In reviewing all of this, here is the conclusion reached by Hamblin:

A presidential-fitness committee—of the sort that Carter and others propose, consisting of nonpartisan medical and psychological experts—could exist in a capacity similar to the Congressional Budget Office. It could regularly assess the president’s neurologic status and give a battery of cognitive tests to assess judgment, recall, decision-making, attention…and make the results available.

Personally, I’m troubled by things like that because I start to imagine all the ways in which such a committee could be abused. What Hamblin didn’t address was the fact that the president’s party happens to control both houses of Congress and seems intent on turning a blind eye to the problem. In addition to that, we have a right wing media that keeps a good portion of the public encased in a delusional bubble. All of that combines into a perfect storm that has taken us beyond the constitutional remedies that are currently in place. That is a grave matter that needs to be handled with caution and thoughtfulness.