* Perhaps based on reporting from the New York Times, conventional wisdom lately has been that Mueller doesn’t have much of a case for collusion and is instead focusing on obstruction of justice. That idea got busted with this report from Matt Zapotosky.

Special counsel Robert S. Mueller III has added a veteran cyber prosecutor to his team, filling what has long been a gap in expertise and potentially signaling a recent focus on computer crimes.

Ryan K. Dickey was assigned to Mueller’s team in early November from the Justice Department’s computer crime and intellectual-property section, said a spokesman for the special counsel’s office…

Mueller’s work has long had an important cybersecurity component — central to the probe is Russia’s hacking of Democrats’ emails in an effort to undermine confidence in the U.S. electoral system and help Trump win. The original FBI counterintelligence probe was launched in part because a Trump campaign adviser was said to have told an Australian diplomat that Russia had emails that could embarrass Democrats, and in July 2016, private Democratic messages thought to have been hacked by Russia began appearing online.

Mueller also is in possession of information from Facebook about politically themed advertisements bought through Russian accounts.

Legal analysts have said that one charge Mueller might pursue would be a conspiracy to violate the Computer Fraud and Abuse Act, if he can demonstrate that members of Trump’s team conspired in Russia’s hacking effort to influence the election.

Rep. Darrell Issa, R-Calif., announced he will not seek re-election Wednesday, adding to a record number of House Republicans heading for the exits ahead of the 2018 midterms — perhaps seeing the writing on the wall of a possible wave election for Democrats.

There are now 31 Republicans who will not seek re-election in November: 19 who are retiring outright and another 12 who are running for higher office. And that list is is expected to grow in the coming weeks.

The last time a party had nearly that many members retire during a midterm year was in 1994, when 28 Democrats left and the GOP subsequently took back control of Congress in the Republican Revolution. Now, it’s Republicans who find themselves in the opposite and unenviable position.

* Last September AG Sessions announced that the Trump administration would wind down the Deferred Action for Childhood Arrivals program. Cristian Farias updates us on what just happened.

More than four months later, and just as Congress seems close to a permanent fix for Dreamers, a federal judge in California has exposed the cravenness of the DACA rollback for what it was, declaring in a ruling late Tuesday that its cancellation “was arbitrary, capricious, an abuse of discretion, or not otherwise in accordance with law.” That’s administrative law-speak for doing something without putting much thought into the decision. U.S. District Judge William Alsup said Trump’s move would cause irreparable harm to hundreds of thousands of young undocumented immigrants unless the court stepped in.

And so he did, essentially ordering the Trump administration to unwind the wind-down of DACA and even telling the Department of Homeland Security to “post reasonable public notice that it will resume receiving DACA renewal applications and prescribe a process consistent with this order.” To be sure, Alsup’s ruling notes that his injunction only applies to those Dreamers who are already beneficiaries of the program — which means new applicants need not apply. But that alone is a significant and aggressive legal remedy that could potentially aid tens of thousands.

Virginia Gov.-elect Ralph Northam (D) announced the last of 15 Cabinet picks earlier this week, assembling what his office says would be the first majority-female Cabinet in state history…

Pending approval by the legislature, Lee would be the eighth woman to serve in one of 15 Cabinet-level positions.

“Our commonwealth’s diversity is our strength, which is why I made a commitment to building a Cabinet that reflects it,” Northam said in a statement. “I’m honored to have this formidable group of experienced, accomplished female leaders joining me in working to build a Virginia that works for everyone, no matter who you are, no matter where you live.”

* Walter Shapiro has an interesting thought.

A strong case can be made that — given Trump’s disinterest in substance and his temperamental unfitness — the less that he does as president, the better off we all are. By this standard, Trump should be encouraged to play golf until his hands are blistered and to watch Fox News until his eyes can no longer focus on the screen.

* Roger McNamee, who wrote the cover story in the current edition of the Washington Monthly titled, “How to Fix Facebook – Before It Fixes Us,” was a guest on CBS This Morning.

* Finally, the extreme cold weather we’ve been having lately is brutal, but it also creates some beauty.

When the Great Lakes get as cold as they are now, water transforms into unusual ice formations on the surface of the lakes. Ice boulders form when cold chunks break from ice sheets, and the movements of a lake’s waves sculpt those pieces into rounder shapes. pic.twitter.com/smSI0cmBK2

Along those same lines, here’s a photograph my brother took last week in a state park on one of those particularly brutal days. Just so you know, this is not a black-and-white shot. These are the actually colors of the ground and ice. 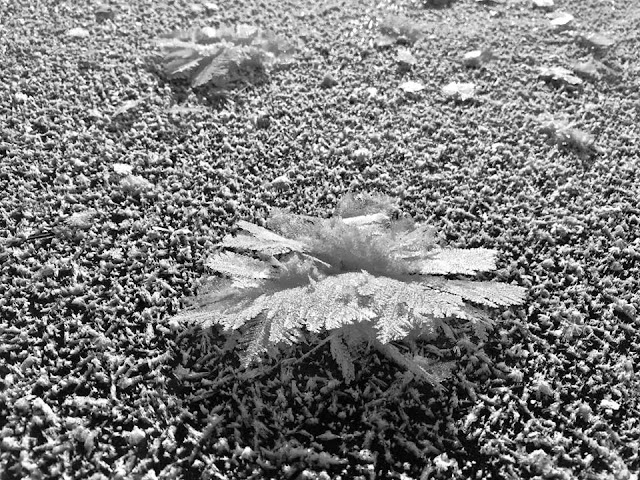