* On this day that we celebrate the birth of Rev. Martin Luther King, Jr, here is the theme I’d like to take up for this edition of Quick Takes:

* Gary Lee, son of Korean immigrants who worked in the Obama White House, became famous with his first tweet. You can read about his story in the Washington Post and/or take a look at his very first tweet storm. Here’s a taste:

4. On my last day, I went into the Oval Office and POTUS greeted me by saying, "안녕하세요". Hello, in Korean. I’m lucky bc @PeteSouza captured that exact moment. pic.twitter.com/sKl5ie0DLM

Not like the brazen giant of Greek fame,
With conquering limbs astride from land to land;
Here at our sea-washed, sunset gates shall stand
A mighty woman with a torch, whose flame
Is the imprisoned lightning, and her name
Mother of Exiles. From her beacon-hand
Glows world-wide welcome; her mild eyes command
The air-bridged harbor that twin cities frame.
“Keep ancient lands, your storied pomp!” cries she
With silent lips. “Give me your tired, your poor,
Your huddled masses yearning to breathe free,
The wretched refuse of your teeming shore.
Send these, the homeless, tempest-tost to me,
I lift my lamp beside the golden door!” 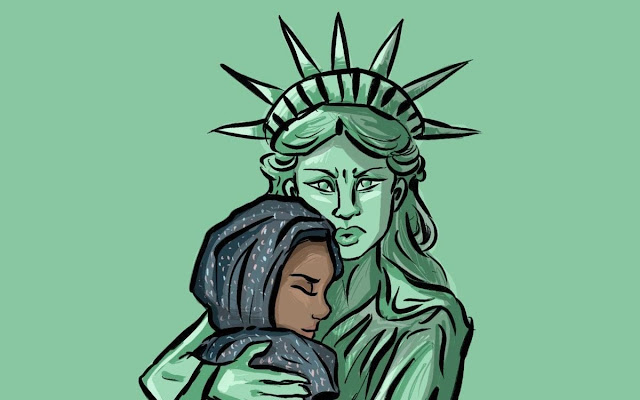 * This is a long quote, but I love this portion of Obama’s speech at the 50th Anniversary of the Selma march.

For we were born of change. We broke the old aristocracies, declaring ourselves entitled not by bloodline, but endowed by our Creator with certain unalienable rights. We secure our rights and responsibilities through a system of self-government, of and by and for the people. That’s why we argue and fight with so much passion and conviction, because we know our efforts matter. We know America is what we make of it.

We are Lewis and Clark and Sacajawea – pioneers who braved the unfamiliar, followed by a stampede of farmers and miners, entrepreneurs and hucksters. That’s our spirit.

We are Sojourner Truth and Fannie Lou Hamer, women who could do as much as any man and then some; and we’re Susan B. Anthony, who shook the system until the law reflected that truth. That’s our character.

We’re the immigrants who stowed away on ships to reach these shores, the huddled masses yearning to breathe free – Holocaust survivors, Soviet defectors, the Lost Boys of Sudan. We are the hopeful strivers who cross the Rio Grande because they want their kids to know a better life. That’s how we came to be.

We’re the slaves who built the White House and the economy of the South. We’re the ranch hands and cowboys who opened the West, and countless laborers who laid rail, and raised skyscrapers, and organized for workers’ rights.

We’re the fresh-faced GIs who fought to liberate a continent, and we’re the Tuskeegee Airmen, Navajo code-talkers, and Japanese-Americans who fought for this country even as their own liberty had been denied. We’re the firefighters who rushed into those buildings on 9/11, and the volunteers who signed up to fight in Afghanistan and Iraq.

We are the gay Americans whose blood ran on the streets of San Francisco and New York, just as blood ran down this bridge.

We are storytellers, writers, poets, and artists who abhor unfairness, and despise hypocrisy, and give voice to the voiceless, and tell truths that need to be told.

We are the inventors of gospel and jazz and the blues, bluegrass and country, hip-hop and rock and roll, our very own sounds with all the sweet sorrow and reckless joy of freedom.

We are Jackie Robinson, enduring scorn and spiked cleats and pitches coming straight to his head, and stealing home in the World Series anyway.

We are the people Langston Hughes wrote of, who “build our temples for tomorrow, strong as we know how.”

We are the people Emerson wrote of, “who for truth and honor’s sake stand fast and suffer long;” who are “never tired, so long as we can see far enough.”

That’s what America is.

* Here is something worth remembering today:

* How about some music to go with all of that inspiration? Here is an American son of African slaves singing his song, “Peace Wanted Just to Be Free” with an Italian tenor for the children of Liberia.