* Tonight the House plans to vote on a short-term spending bill that few, if any, Democrats will support. As of this writing, here’s the latest from Cameron Joseph:

Ryan said late Thursday morning that he’d be able to get the votes.

“I feel we’re making really good progress with our members,” he said. “Our members are understanding the gravitas for the situation.”

But almost no House Democrats seem ready to help Ryan out — including the 14 who voted for the last continuing resolution, many of whom told TPM they would not back the bill. And members of the hardline conservative Freedom Caucus indicated Thursday afternoon that they weren’t ready to get onboard, while saying the GOP is still short on votes.

“It’s still our belief that there’s not the votes to pass it with Republicans only,” Freedom Caucus Chairman Mark Meadows (R-NC) told reporters Thursday afternoon. “I promise you, he doesn’t have the votes.”

That raises the chances it might fail on the House floor ahead of a scheduled Thursday night vote.

*Based on this news, Ryan may have found a way to buy off the Freedom Caucus.

The offer had to do with military funding. Meadows still has to meet with full Freedom Caucus but says he will recommend voting YES on funding bill. If so this is big. Pressure would now fall on the Senate.

* For a while now, Trump has been tweeting things like this:

A government shutdown will be devastating to our military…something the Dems care very little about!

Stan Collender reminds us of who is in charge of deciding what happens to the military during a government shutdown.

…the president and not Congress has the sole authority to determine which federal services are “essential” and will continue during a shutdown. Presumably that will include the Pentagon, air traffic controllers, the Transportation Security Agency, most of the Department of Homeland Security and even something as pedestrian as the people who feed the animals at the National Zoo. These functions will stop only if Trump decides they should.

* It’s clear that the president can ensure that the military is operating during a shutdown, given that they’re working so hard on this:

The Trump administration is drawing up plans to keep hundreds of national parks and monuments open to the public if the government shuts down this weekend, a precedent-setting change aimed at blunting anger over the disruption of federal services.

With government funding set to expire at midnight Friday, Interior Secretary Ryan Zinke was still working with White House and National Park Service officials to develop a plan for keeping open parks from the District to Montana without rangers or other staff on site.

* The latest news from Gallup shouldn’t surprise anyone.

One year into Donald Trump’s presidency, the image of U.S. leadership is weaker worldwide than it was under his two predecessors. Median approval of U.S. leadership across 134 countries and areas stands at a new low of 30%, according to a new Gallup report. 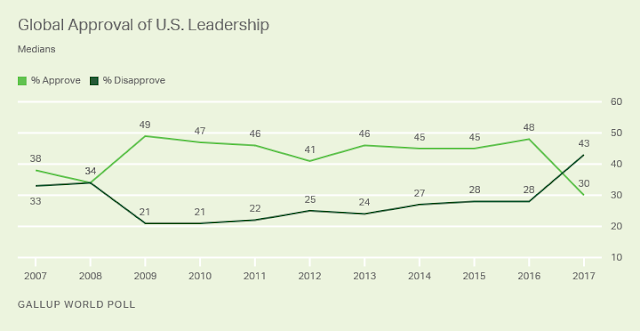 * It is positively Orwellian to propose that the government is going to advance civil rights by protecting the right of people to discriminate in the provision of health care.

The Trump administration will create a new conscience and religious freedom division within the Health and Human Services Department to ease the way for doctors, nurses and other medical professionals to opt out of providing services that violate their moral or religious beliefs…

The new division, which will be part of the HHS Office for Civil Rights, will not only accept complaints from health-care professionals but will be responsible for ensuring that hospitals, clinics and other institutions across the country are accommodating their beliefs.

* Finally, here’s a new song that is a collaboration between Common, Robert Glasper and Karriem Riggins, featuring vocals from Brandy.