* Jonathan Swan got ahold of a White House document purporting to be an assessment of the bipartisan immigration agreement negotiated by the Durbin-Graham “Gang of Six.” I’m going to post it with Kevin Drum’s comments. 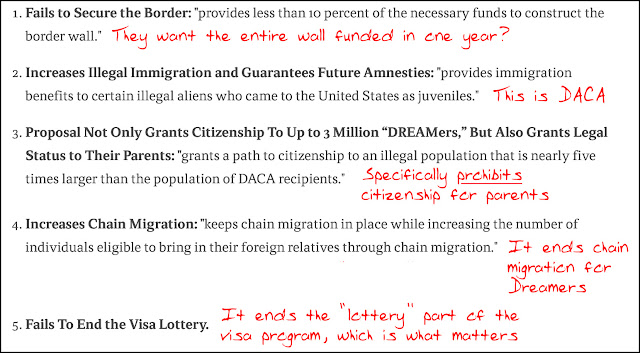 The take-away is that the Trump administration doesn’t just lie to us, they lie to themselves.

If President Trump’s first year in office seemed chaotic from a staffing perspective, there’s a reason. Turnover among top-level staff in the Trump White House was off the charts, according to a new Brookings Institution report.

Turnover in Trump’s first year was more than triple that in former President Barack Obama’s first year, and double the rate in President Ronald Reagan’s White House. A full 34 percent of high-level White House aides either resigned, were fired or moved into different positions in this first year of the Trump presidency.

* This record-breaking presidency is also breaking a lot of precedents, including this one:

The White House has at present, according to a person familiar with the matter, indicated to NBC News that President Donald Trump will not take part in a recent Super Bowl ritual: a pre-game interview between the commander-in-chief and the news unit of the network hosting the game.

The speculation is that this is all because of the president’s objection to the NFL protests. I think that’s hogwash. This is a much more likely explanation:

Presidents' pre-game Super Bowl interviews are conducted by the anchor of the rotating network that broadcasts the game. This year it's NBC & Lester Holt. Trump's last interview with Holt didn't go swimmingly.

* Rebecca Traister has written a long-read titled, “The Other Women’s March on Washington.”

Over the past terrible, horrible, no-good, very-bad year, an unprecedented number of women have been motivated to dive into politics for the first time, many with the hope of defeating or succeeding men who’ve held the bulk of America’s political power for centuries.

To date, 390 women are planning to run for the House of Representatives, a figure that’s higher than at any point in American history. Twenty-two of them are non-incumbent black women — for scale, there are only 18 black women in the House right now. Meanwhile, 49 women are likely to be running for the Senate, more than 68 percent higher than the number who’d announced at the same point in 2014.

* That article is accompanied by a list of “10 Women Running for Office to Watch in 2018.” Of course, Stacey Abrams is on the list. I am struck by names like Gina Ortiz Jones and Fayrouz Saad. Here’s another candidate with a fascinating story:

Mai Khanh Tran – Left at a Saigon orphanage just before the fall of the city in 1975, Tran came to the U.S. at age 9. She and her family became migrant farmworkers before she worked as a janitor and put herself through Harvard. Now a pediatrician running to replace Republican Ed Royce, Tran has drawn national media attention — and support from 314 Action, a PAC dedicated to electing scientists.

* I’m sure this will be a huge relief to everyone:

The Eagles have settled their legal case against a Mexican hotel named Hotel California after the establishment withdrew its application to trademark the name in the US.

The band had claimed that the hotel, located in Todos Santos, “actively encouraged” guests to believe it was affiliated with the band by playing their music in the lobby and selling merchandise related to their 1976 album Hotel California. They also alleged in court documents that the proprietors led consumers to believe that the hotel “served as the inspiration for the lyrics in Hotel California, which is false.”

That’s a good of an excuse as I’m going to get to post this:

* Finally, a lot of people are attempting to summarize the last year in preparation for the anniversary of Trump’s inauguration tomorrow. I bet that all ya’ll (click here for a translation if you’re not from the South) are going to agree with me that this one is the best.