As negotiations continue over a legislative fix to DACA, a theme is emerging from several quarters that the Democrats have moved left on immigration. The case has been made by Peter Beinart at the Atlantic, T.A. Frank at Vanity Fair, and David French at National Review.

Both Beinart and French demonstrate that their arguments are disingenuous right at the beginning by including a quote from Barack Obama’s 2006 book, The Audacity of Hope.

When I see Mexican flags waved at proimmigration demonstrations, I sometimes feel a flush of patriotic resentment. When I’m forced to use a translator to communicate with the guy fixing my car, I feel a certain frustration.

That is meant as an indication that Democrats once shared Republican concerns about the “browning of America” via immigration. But what both authors fail to do is include what Obama wrote after those words.

But ultimately the danger to our way of life is not that we will be overrun by those who do not look like us or do not yet speak our language. The danger will come if we fail to recognize the humanity of Cristina and her family– if we withhold from them the rights and opportunities that we take for granted, and tolerate the hypocrisy of a servant class in our midst; or more broadly, if we stand idly by as America continues to become increasingly unequal, an inequality that tracks racial lines and therefore feeds racial strife and which, as the country becomes more black and brown, neither our democracy nor our economy can long withstand.

In the first part of the quote, Obama was doing something those of us who are familiar with his approach will recognize immediately: empathize with people over their concerns. As has often been the case, right wing media took his words out of context and used them to create a meme that Obama was once against immigration. Beinart and French should know better.

Frank does something similar with this:

The swing to the left has occurred with such speed, however, that Democrats have barely paused to consider the risks. A decade ago, Democrats supported measures such as fencing on the southern border. Today, nearly all forms of enforcement or restrictions have become concessions, and many mechanisms to enforce the law are at this point considered unacceptable.

It is true that 26 Democrats (including Obama, Clinton and Schumer) voted for the Secure Fence Act in 2006. Contrary to what Republicans would have you believe, the vast majority of Democrats have never supported “open borders” and have always been willing to do what is necessary to secure them. But it is interesting to note what the Bush administration wrote after signing that bill in 2006.

This act is one part of our effort to reform our immigration system, and we have more work to do…Comprehensive immigration reform requires that we face the reality that millions of illegal immigrants are here already. The President opposes amnesty but believes there is a rational middle ground between granting an automatic path to citizenship for every illegal immigrant and a program of mass deportation. Illegal immigrants who have roots in our country and want to stay should have to pay a meaningful penalty for breaking the law, pay their taxes, learn English, work in a job for a number of years, and wait in line behind those who played by the rules and followed the law.

That basically describes the “pathway to citizenship” for undocumented immigrants that was included in the 2013 bipartisan immigration bill. The pairing of efforts to secure our border with a pathway to citizenship has always been the bargain negotiated on comprehensive immigration reform, dating back to the bill signed by Ronald Reagan in 1986. It was also true of the 2006 bipartisan immigration bill that was sponsored by then-Republican Arlan Specter and co-sponsored by Sen. Hagel (NE), Sen. Martinez (FL), Sen. McCain (AZ), Sen. Kennedy (MA), Sen. Graham (SC), and Sen. Brownback (KS). Much like in 2013, that one passed the Senate, but never the House.

The fact is that it is Republicans who have moved to the right on immigration. To get an idea of how extremist they have become, take a look at what happened during a debate in 1980 between their candidates running for president in the Republican primary.

The truth is that Donald Trump captured the Republican base that had been subjected to fear-mongering over the “browning of America” and offered them xenophobic policies that haven’t been embraced by this country since the late 1800s. Now the GOP has shifted the traditional debate about border security and a pathway to citizenship to one about an ineffective and ridiculously expensive wall, drastic changes to our legal immigration system, and a “deport ’em all” strategy for undocumented immigrants.

To the extent that Democratic positions have shifted, they have done so in response to some rather dramatic changes that are underway when it comes to illegal immigration. For example, people are not pouring over our southern border.

The number of unauthorized immigrants living in the United States in 2015 fell below the total at the end of the Great Recession for the first time, with Mexicans continuing to represent a declining share of this population, according to new Pew Research Center estimates based on government data. 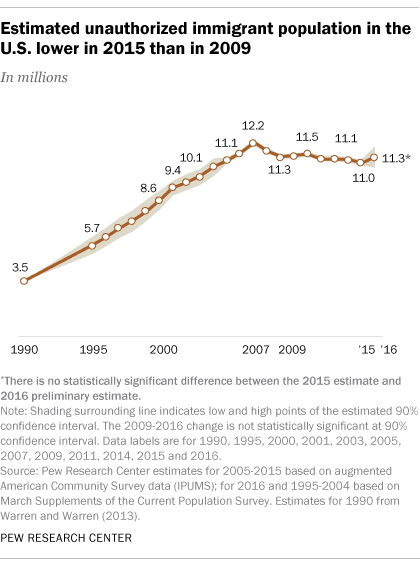 The number of undocumented immigrants has stabilized, and more Mexicans are leaving than arriving. But perhaps this is the most telling data point. 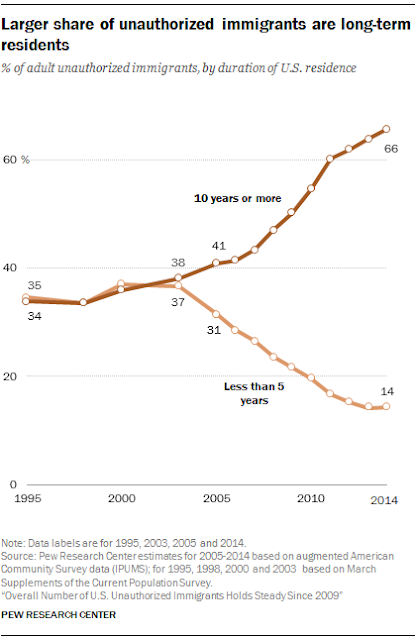 When it comes to undocumented immigrants, the real question on the table is what this country should do with the 11 million who are already here, most of whom have lived in this country for over 10 years. DACA was a partial answer to that because the Dreamers garnered bipartisan support.

It is clear that the Trump administration’s answer to that question is to grant Dreamers a pathway to citizenship in exchange for closing loopholes that prevent them from deporting the remaining 11 million. To the extent that Democrats fight against that, they are standing firm on a position as Republicans travel down the rabbit hole of extremism.