Republicans are anxious to release the memo written by Rep. Devin Nunes that is reportedly an attack on the FBI’s handling of the Mueller investigation. Prior to the committee’s vote on whether to release it, FBI Director Christopher Wray asked to brief them about his concerns. The Republicans on the committee weren’t interested in what he had to say and voted to release it without hearing from him.

As I mentioned yesterday, the president now has five days to decide whether to stop the release of the memo or say nothing and allow it to be made public. After the State of the Union speech last night, Trump told Rep. Jeff Duncan that he’s 100 percent behind releasing the memo.

Today on Fox News radio, John Kelly said that it would happen soon.

John Kelly says on Fox News radio that he's seen the Nunes memo and that it will be "released pretty quick." Kelly: "I'll let all the experts decide that when it's released. This president wants everything out so the American people can make up their own minds."

That last line from Kelly is a blatant lie. If the president wanted to get everything out, he would also release the memo written in response by Rep. Adam Schiff. I’d be willing to bet a lot of money that will never happen.

When the Nunes memo is released, it will be important to remember what Trump’s own FBI director said about it.

FBI Director Christopher Wray told the White House he opposes the release of a controversial, classified GOP memo alleging bias at the FBI and Justice Department because it contains inaccurate information and paints a false narrative, according to a person familiar with the matter.

It is very likely that major news outlets will respond to the release of this memo by granting it a certain level of credence. But from what Democrats on the Intelligence Committee have said about it, the “false narrative” is in the evidence the memo omits rather than outright lies. What we’ll be getting is information that backs up the Republican attacks on the investigation without exonerating facts. To the extent that anyone assumes it paints an accurate picture, they will have been purposefully misled. Earlier today, the FBI took the unusual step of releasing this statement: 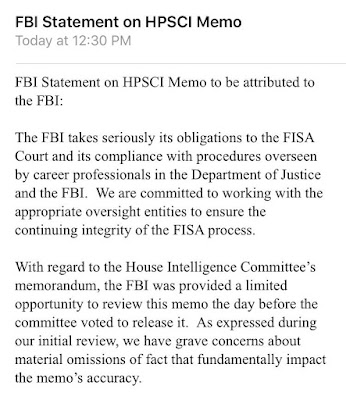 It is obvious that Trump, Nunes and Kelly aren’t interested in allowing the American people to make up their own minds. Instead, they are trying to poison the well with inaccurate information. Even Trump’s own FBI director says so.