Over the years, Barack Obama has joked that if he watched Fox News, he wouldn’t have voted for himself. An example of that is one of the hottest stories on the aggregator Memeorandum right now:

If you click on the link, you are out of luck because apparently this story was even too lame for Sean Hannity. He’s deleted both the article and the tweet promoting it. But your intrepid blogger caught it all before the author got rid of it. 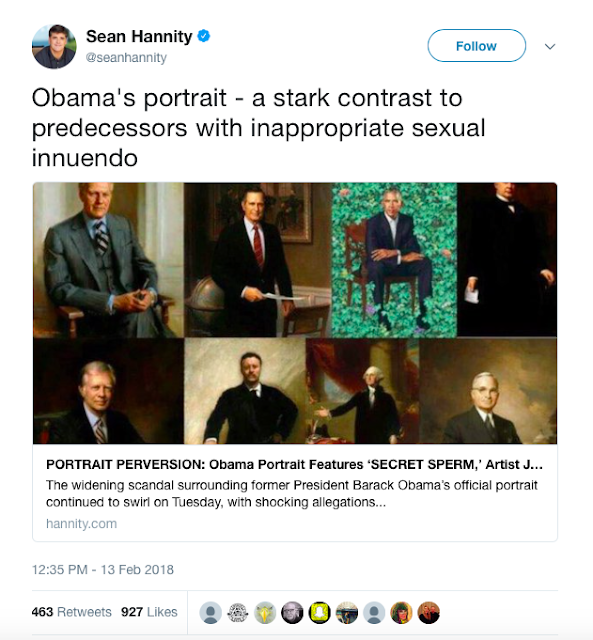 Here is what Hannity wrote on his own web site before it was deleted:

The widening scandal surrounding former President Barack Obama’s official portrait continued to swirl on Tuesday, with shocking allegations the artist included ‘secret sperm cells’ within the painting and once joked about “Killing Whitey” during an interview.

Controversy surrounding Kehinde Wiley’s wildly non-traditional portrait of the Commander-in-Chief broke out within minutes of its unveiling; with industry insiders claiming the artist secretly inserted his trademark technique -concealing images of sperm within his paintings.

Seriously, I’m not making this up. Can’t you see the secret sperm cells? We now know where all of that came from.

Look, I don't think y'all are getting this.

The Hannity Sperm Portrait nonsense was started THIS MORNING by racist 4Chan trolls, w/ the express purpose of "getting it in the news."

The post calls the Obamas "king and queen n****r."

Hannity was writing it up by early afternoon. https://t.co/E5JOuMX9h9

The reference to “Killing Whitey” is about this, which is the part of the story getting the most attention:

Two paintings from 2012, depicting the Biblical story of Judith beheading the Assyrian general Holofernes, began making the rounds online on Monday. In Wiley’s rendering, Judith is depicted as a black woman and Holofernes as a white woman.

Fans of the Obama portrait will recognize Wiley’s photo-realistic human figures, distinct colors and prominent use of floral backgrounds.

“Judith and Holofernes is from Wiley’s most recent body of work and his first series of paintings to feature female subjects,” a 2012 explanation of the work from the North Carolina Museum of Art foundation reads. “Wiley translates this image of a courageous, powerful woman into a contemporary version that resonates with fury and righteousness.”

In a New York Magazine piece also from 2012, Wiley explained that the impetus for the work came from the renditions of the Biblical scene by Renaissance artists Caravaggio and Gentileschi.

The portrait of former president Obama was done by Kehinde Wiley, who likes to paint black women holding the decapitated heads of white women up like trophies pic.twitter.com/c3AU3ZgLQz

The story of Judith beheading Holofernes is the subject of many paintings and sculptures from the Renaissance and Baroque periods. I’m no art critic, but those seem to be in keeping with Wiley’s overall style.

Over the previous two decades, the Los Angeles-raised and New York City-based artist became known for his larger-than-life canvasses showing contemporary African Americans within centuries-old trappings of power and status. Many of his highly sought-after works, which sell for hundreds of thousands of dollars, evoke Old Master paintings.

He’s also become known for his process of basing portraits off photographs of everyday people he meets on city streets around the world. It’s a method he first started using in Harlem, where these amateur models would choose classical images as inspiration for the resulting portraits.

Of course, Hannity and the other right wingers aren’t going to tell their audience about this part of Wiley’s portrait of Obama:

The flora in the portrait represent the stations of Obama’s scattered personal and ancestral past—blue lilies for Kenya; jasmine for Hawaii; chrysanthemums for Chicago—and their momentary intrusions might hint at the ways in which the man was somewhat shrouded by the dazzling story that delivered him into his nation’s arms.

Since stories about these paintings by Wiley are all over right wing media right now, I’d guess that the reason Hannity deleted his is because of some additional ignorance that was on display when he suggests that Obama’s portrait was in stark contrast to his predecessors and provided a montage of previous presidents. All of the paintings except Obama’s are official White House portraits of presidents. The one of our 44th POTUS hasn’t been installed yet. The portraits of the Obamas that were unveiled yesterday are for the Smithsonian National Portrait Gallery, in Washington, D.C. More recent presidents have chosen modern artists for these portraits. For example, here is John Kennedy’s.

While a bit more traditional, George W. Bush’s portrait at the Smithsonian is a lot less formal. 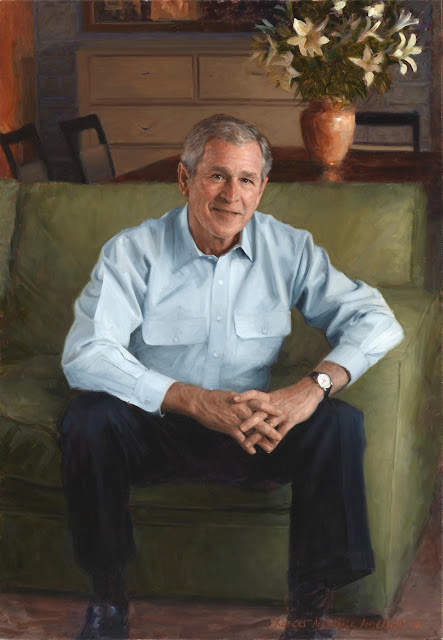 Since deleting these items, Hannity has been completely mum about all of this on Twitter and his website. But I have to admit to a certain amount of schadenfreude at seeing Hannity with his pants down over a lie that even he can’t spin.

UPDATE: Sean Hannity later released a statement about all of this in which he takes no personal responsibility and basically blames his staff:

“Earlier today my web staff posted content that was not reviewed by me before publication. It does not reflect my voice and message and, therefore, I had it taken down.”