The Parkland shooting happened just as the Mueller indictments had re-fueled a discussion about the ways that social media was abused during the 2016 election. What we’re watching now is a movement that has been spurred by students who grew up with the internet and are generally comfortable with technology, particularly social media. Some have dubbed them “Generation Z.” As such, they are exploiting the positive role that social media can play in our culture.

But even beyond that, I’m pretty fascinated with Charlie Warzel’s take on how the pro-Trump media has met its match with these young people. Here is how he describes the approach of the pro-Trumpers:

Dating back to the months leading up to the 2016 presidential election, the pro-Trump media has proven it’s remarkably savvy at crafting captivating narratives for its followers. These narratives follow a similar pattern in that they identify and attack a polarizing enemy — often a legacy institution or brand that’s particularly vulnerable to digital propaganda, like Hillary Clinton, the Washington establishment, or the mainstream media. Leveraging the power of their followers across social platforms, the pro-Trump media’s best practitioners attempt to own the story and stay one step ahead of their enemy. By the time the enemy has scrambled to address the outrage or debunk false information, the pro-Trump media has moved on to the next microscandal.

Their attacks on the students of Generation Z aren’t as successful as they have been when aimed at previous targets.

In the case of the Parkland students, however, the mold doesn’t fit. A look at the Twitter feeds of students like David Hogg shows that they are a remarkable foil for the pro-Trump media’s trolling tactics. Like the pro-Trump media, they, too, are an insurgent political force that’s native to the internet. And while they use legacy platforms like cable news to build awareness of their names and of their causes, much of the real work happens online.

They use platforms like Twitter to call out and put pressure on politicians. They address prominent critics like Bill O’Reilly not with bland, carefully written statements, but by dunking on them, and they respond to misinformation in real-time with their own viral, emoji-laden posts. Rather than take the bait on the crisis actor narrative, they opted to have fun with the conspiracy theories by mocking them. “I’m thankful that there are people out there finding my doppelgangers for me. I’ve always wanted to have a party with a room full of people who look like me,” Emma Gonzalez, a Parkland student, told BuzzFeed News. By dismissing the conspiracies for what they are — a tired, rather boring page in the Infowars playbook — Gonzalez and her classmates have stripped them of their power. Before the pro-Trump media can finish its line of attack, the students, unfazed, have moved on, staying one step ahead of their political enemies and owning the story. 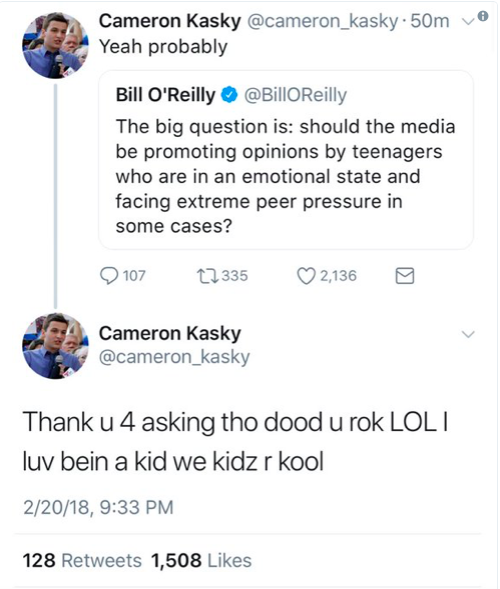 I’ve seen a fair amount of that kind of thing in my own twitter feed. These kids aren’t intimidated and they’re often making fun of these taunts rather than elevate them to serious statements. A lot of people have commented on how media-savvy they are. But perhaps it’s more about being social media-savvy.

Meanwhile, they continue to stir things up.

Students in Miami-Dade and Broward counties are walking out of school to protest for gun reform. These kids are incredible. ✊
pic.twitter.com/ApWdOvzadz

A huge crowd of teens exiting Union Station and heading to the Capitol to call for action on gun violence pic.twitter.com/5VVWGFTGij

Florida school shooting survivor: “To Congress… you have the power to change this and if you don’t, then we will change you. We may be too young to vote, but soon we will be able to vote and we will vote you out.” https://t.co/3HR3rc1S7x pic.twitter.com/NdKNuRfbUF