At the CNN forum last night, Dana Loesch, spokeswoman for the NRA, made the ridiculous suggestion that there was some comparison between the rifles that were available when the Second Amendment was written and the AR-15, which has become the weapon of choice in mass shootings. I was reminded of something Christopher Ingraham wrote a while ago titled, “What ‘arms’ looked like when the 2nd Amendment was written.” He included this chart: 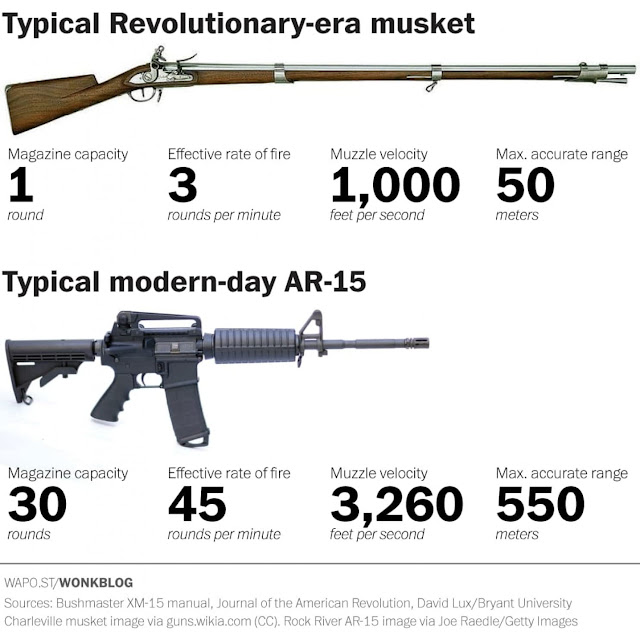 By now, even those of us who are not gun enthusiasts have learned about the significance of 30 rounds with an effective rate of fire of 45 rounds per minute. That is what leads to the tragedy of 17 deaths at the Parkland shooting in a matter of minutes.

What I wasn’t aware of is how deadly the muzzle velocity of 3,260 feet per second could be. That is the topic of an article by Heather Sher, a radiologist who was involved in the treatment of some of the victims last week. The story is pretty gruesome, but it is critical that we all be informed about what we’re dealing with.

Routine handgun injuries leave entry and exit wounds and linear tracks through the victim’s body that are roughly the size of the bullet. If the bullet does not directly hit something crucial like the heart or the aorta, and they do not bleed to death before being transported to our care at a trauma center, chances are, we can save the victim. The bullets fired by an AR-15 are different; they travel at higher velocity and are far more lethal. The damage they cause is a function of the energy they impart as they pass through the body. A typical AR-15 bullet leaves the barrel traveling almost three times faster than, and imparting more than three times the energy of, a typical 9mm bullet from a handgun. An AR-15 rifle outfitted with a magazine cartridge with 50 rounds allows many more lethal bullets to be delivered quickly without reloading.

Sher tells this story about a colleague whose child is a student at Stoneman Douglas High School:

One of my ER colleagues was waiting nervously for his own children outside the school. While the shooting was still in progress, the first responders were gathering up victims whenever they could and carrying them outside the building. Even as a physician trained in trauma situations, though, there was nothing he could do at the scene to help to save the victims who had been shot with an AR-15. Most of them died on the spot, with no fighting chance at life.

None of this is meant to downplay the fact that any gun is a lethal weapon. But it isn’t just the magazine capacity of the AR-15 that is horrific. What you have is a weapon that is specifically designed to be able to fire off more rounds per minute with a velocity that assures that almost every round will be deadly. It is positively insane that these guns are so easily available to almost everyone in this country.