Just as Mark Twain once said that rumors of his death had been greatly exaggerated, I would suggest that recent polls indicating that the blue wave met an untimely end were greatly exaggerated. According to the latest news, all of the signs point to the fact that it is still alive and well.

First of all, you may have heard that there is a big special election coming up in two weeks in Pennsylvania’s 18th congressional district between Republican Rick Saccone and Democrat Conor Lamb. It is important to keep in mind that this is a solidly red district that Trump won by 20 points. Today the Cook Political Report moved the race from “lean Republican” to “toss up.” Here’s some of the specifics:

There’s also major angst among Republicans that the enthusiasm gap that’s shown up in other special elections will show up here. Despite its blue-collar reputation, the 18th CD has the highest rate of college graduates of any seat in Western Pennsylvania thanks to its Allegheny County suburbs (Lamb’s base). If those voters turn out at a much higher rate than Trump-oriented Westmoreland County’s, Lamb would probably prevail.

Secondly, it is pretty typical for politicians to send out fundraising emails that make it sound like the sky is falling. But in the case of the one sent out by Texas Republican Governor Greg Abbott, it also happens to be true.

Well, that was almost predictable. Okay it was totally predictable #TxLege pic.twitter.com/KP0xxstKK8

You can read the particulars about what is happening in early primary voting at the Dallas Morning News. But the huge takeaway is that Democrats are turning out in numbers comparable to a presidential election. According to Gallup, Trump is less popular in Texas than he is in Michigan.

Finally, the downturn for Democrats in the generic ballot seems to be over. While single polls should be taken with a grain of salt, the latest from CNN has Democrats with a 16 point advantage. According to the aggregate at FiveThirtyEight, Democrats are now favored by almost 10 points. 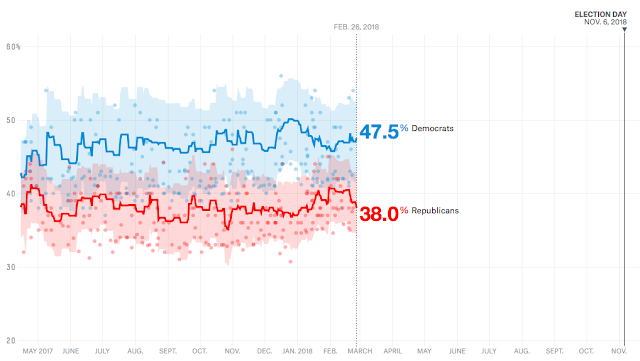 That is a significant change from early February when the Democratic lead fell to only about five points, but it doesn’t quite match the 13 point lead they had at the beginning of the year.

The reasons for that volatility are more complex than the Republicans would have you believe when they credit it to improvement in the economy and tax cuts. Neither of those have had a substantial impact on voters. But talk about the economy, tax cuts and all of the conspiracy theories conjured up by Republicans might have worked in tandem until the most recent Mueller indictments reminded everyone that we have a president who is under criminal investigation and a Republican-controlled congress that is covering for him.

It is very likely that over the next nine months we’ll see swings in the polls like the ones we’ve experienced over the last couple of months. That’s because a lot of unknowns will happen over that time period that will affect the mood of the country. But there are two things that are already known: (1) Trump will continue to do/say offensive things, and (2) most of the public has made up their minds about him by now. To the extent that the 2018 midterms are a referendum on his presidency and what the Republicans in Congress have/haven’t done to reign him in, there is a blue wave coming. Whether it turns out to be a breaker or a tidal wave remains to be seen.