* Given that it’s a day ending in “y,” of course Trump did something idiotic.

President Trump on Thursday said he has decided to impose punishing tariffs on imported steel and aluminum in a major escalation of his trade offensive, disappointing Republican congressional leaders and inviting retaliation by U.S. trading partners…

Investors appeared shaken by the news. The Dow Jones industrial average fell around 500 points, a loss of 2 percent, in early-afternoon trading.

The president’s move, relying upon a little-used provision of U.S. trade law, is expected to trigger immediate legal challenges by U.S. trading partners at the World Trade Organization and invite retaliation against American exports.

…In 2002, the last time the United States imposed steel tariffs, steel users blamed the measures for the loss of up to 200,000 jobs.

* This president’s answer to the opioid epidemic: the death penalty.

“We have pushers and drug dealers, they are killing hundreds and hundreds of people,” Trump said at a White House summit on opioid abuse. “If you shoot one person, they give you life, they give you the death penalty. These people can kill two thousands, three thousand people and nothing happens to them.”

Of course that only applies to the drug dealers. When it comes to the pharmaceutical companies, pffttt.

* The “March For Our Lives” organizers have run into a snag.

A planned rally against mass shootings can’t be held on the Mall later this month because it conflicts with what’s described in a National Park Service permit application as a “talent show.”

A permit application filed last week by survivors of the Parkland, Fla., school massacre indicated the “March For Our Lives” rally will be on March 24, with up to 500,000 attendees expected. Mike Litterst, a spokesman for the Park Service, said organizers proposed holding the event on the Mall but were looking to move the rally to another location after the request conflicted with a film crew’s permit.

* Kaiser has a new tracking poll out today on the favorability ratings for Obamacare. Of course Kevin Drum has a handy chart showing that it just keeps getting more popular..

* Ella Nilson writes that Democrats are suddenly competitive in Texas.

For the first time in decades, Democrats are making a big play for Texas in 2018…

In 2016, “They couldn’t even find a gadfly to run,” Jones said. Now, “Not only are you seeing a large number of Democrats file [paperwork to run], but you’re seeing some really top-tier candidates. Democrats came out of the woodwork.”

Democrats got a taste of good news in 2016 with Clinton’s better-than-expected margins in these congressional districts. Fast-forward a year and a half; now Democrats have already pulled off a long-shot win in deep-red Alabama in 2017.

They could repeat that in Texas if they can do two things at once: spur Hispanic and Latino voters to turn out in droves, and peel off white, moderate suburbanites who don’t like Donald Trump (particularly women).

* I have a task for someone. This needs to be on bumper stickers all over the country…tomorrow.

* Finally, as a budding gardner pinning for spring up here in the tundra, I love this! 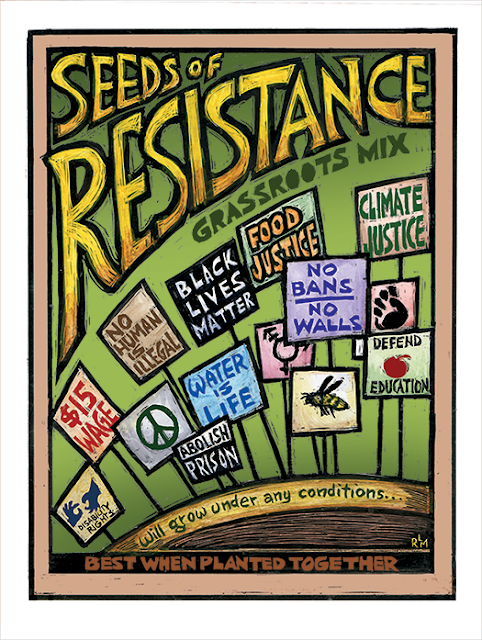