Hanging on the wall there are handmade Japanese samurai swords and calligraphy from a former Chinese student.

“His father is a calligrapher who did this,” Salonen explains. “[It] basically says, ‘Spring, Flowers, Autumn, Fruit,’ which means everything goes through a period of growth and development.” 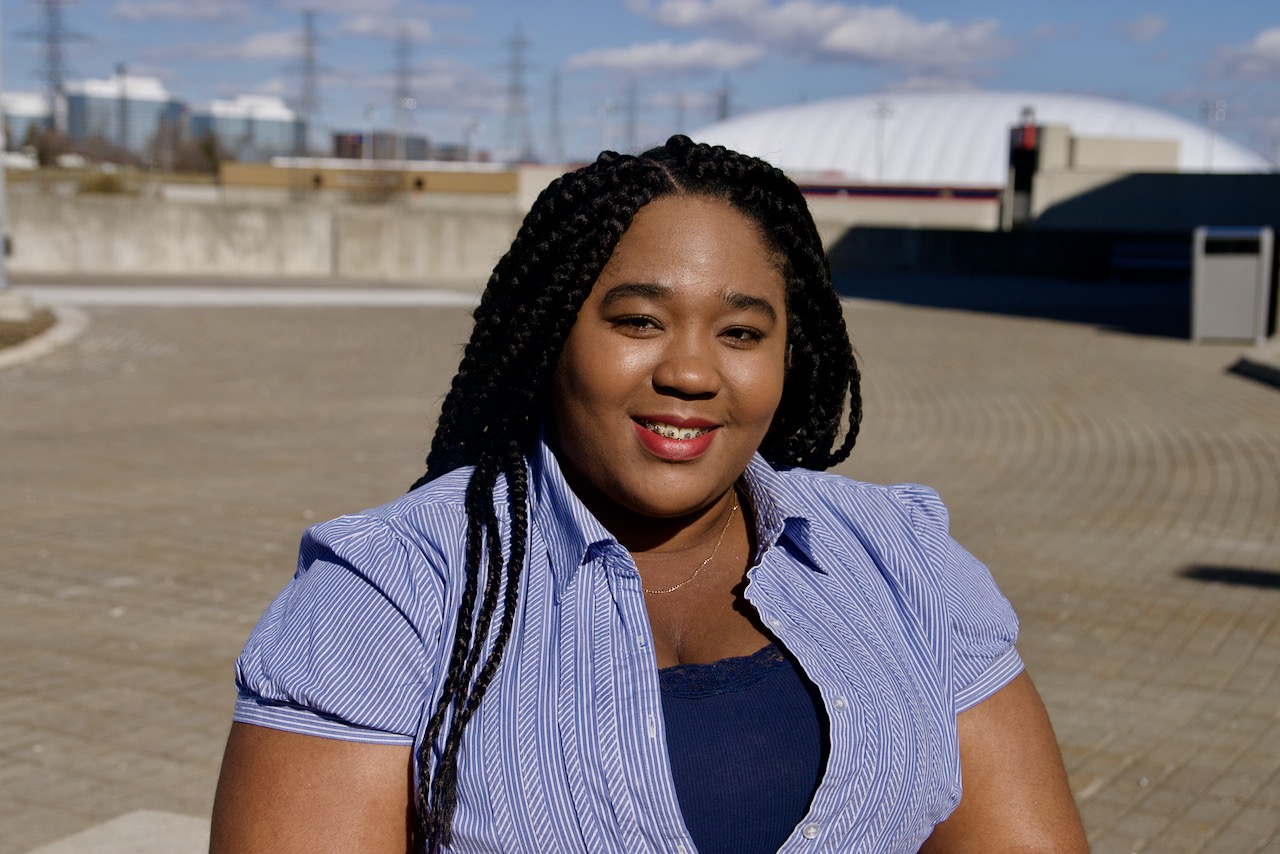 Alexis Lewis, who is from the Bahamas, said she felt more welcomed in Canada than she did in the United States. (Nate Tabak for WGBH News)

Since its founding 90 years ago, Bridgeport has grown and developed from a small private school that primarily served people from this heavy industrial part of Connecticut to an institution where, today, nearly one third of its 5,000 students come from overseas and pay full tuition.

“We diversify our sources of revenue in order to succeed in our mission,” Salonen said.

While those sources of revenue have flowed from 82 countries, including India, China and Saudi Arabia, this year, they’ve slowed. The school has seen about a three percent drop in new international students.

As the number of college-age Americans declines, schools have turned their sights overseas, recruiting and enrolling more foreign students. After years of steady growth, the U.S. colleges are seeing an overall drop in international enrollment.

Salonen chalks it up to jitters over the direction of President Trump’s immigration policies.

“The U.S. government policy hasn’t really changed in the short-term, but the perception overseas and the discussion of impending changes are very real,” he said.

To balance its budget and make up for lost revenue, Bridgeport is cutting administrators that serve international students.

“If you depend on them too much to pay the bills, and this is now the case in many institutions, they should be concerned big time,” said Phillip Altbach, the founder of the Center for International Higher Education at Boston College.

The National Science Foundation found that in the past year the number of international undergraduates in in the country dipped by 2 percent and graduate students declined by 5 percent.

“The schools at the top of the pecking order, they’re going to do pretty well,” he said. “The problem is going to be at the mid-range and lower-end of the prestige hierarchy in the United States.”

“We remain a pretty open country when it comes to immigration,” said David Agnew, president of Seneca College in Toronto. 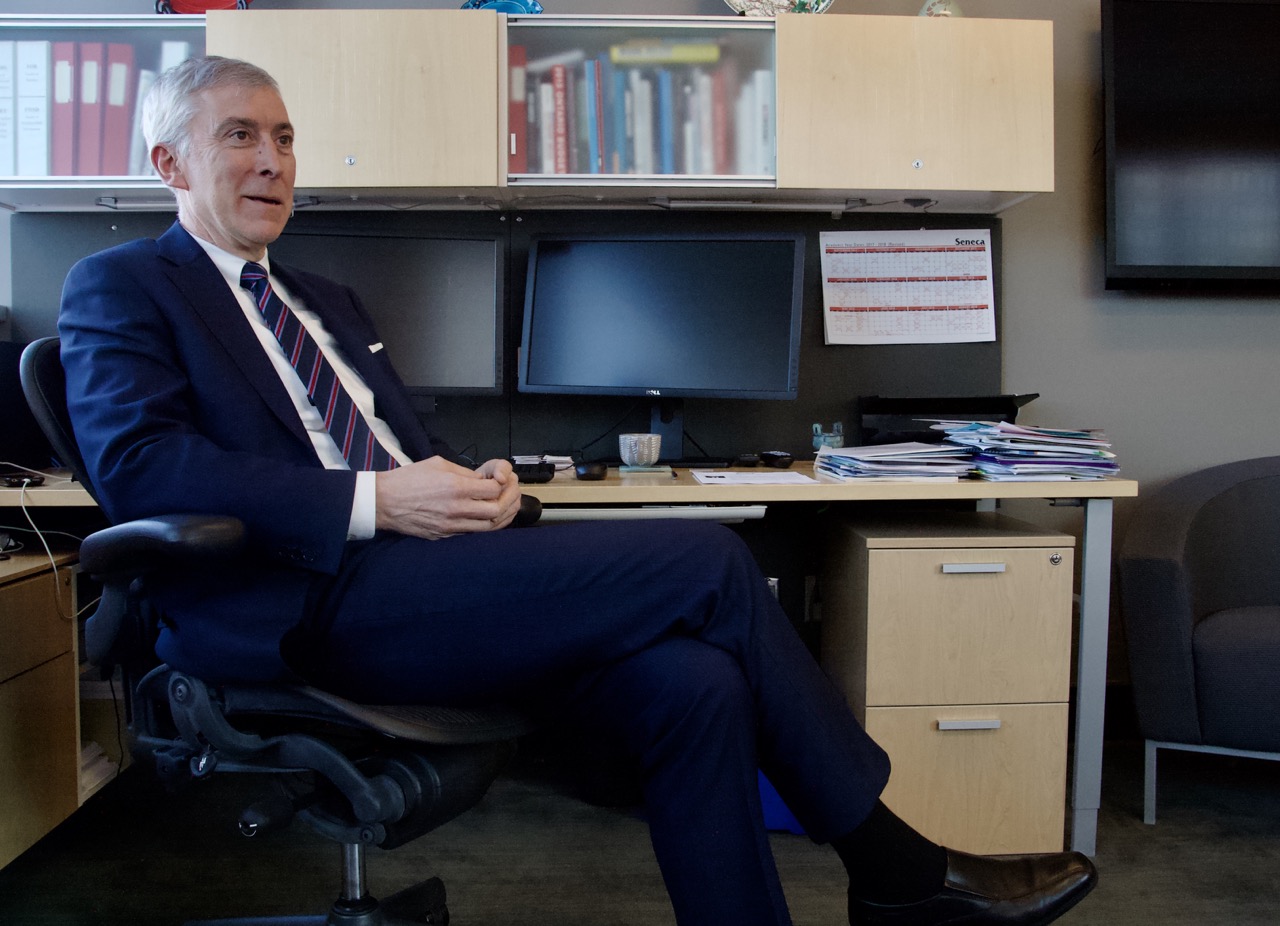 “In the last two years our international applications have gone up by about 90 percent,” Agnew said. “The demand has gone up significantly.”

“We’ve had a consensus really across the political spectrum that this country needs immigrants — and will continue to need immigrants,” he said.

That’s why Seneca is recruiting students like Alexis Lewis from The Bahamas.

After looking at schools in Florida, Nebraska and Texas, she chose Seneca in part to avoid America’s political climate.

“You shouldn’t have to worry about how anything that Trump says is going to affect you as an international student,” she said.

Lewis sat on a bench outside the concrete buildings that dominate Seneca’s main campus. It’s outside Toronto’s cosmopolitan heart, but for Lewis, the school embodies the welcoming spirit that Canada is known for.

“It came off a bit safer, friendlier, and I didn’t have to think about my environment being hostile towards me, looking over my shoulder,” Lewis said.

Lewis doesn’t regret passing up on what many still see as the gold standard – an American degree – and now she’s considering making Toronto her home.