It is important for someone like me to admit when I’ve made an error. I did so last week when I wrote that Trump was likely to lose rural voters if he engages in a trade war. My conclusion was based on the faulty assumption that rural America is synonymous with agricultural America.

My thinking was initially challenged by an interview Sean Illing conducted with Robert Wuthnow, a sociologist at Princeton University. Wuthnow spent eight years (2006-2014) interviewing over 25,000 people who live in rural areas. What stands out about what he found is that, long before Trump announced his candidacy, these communities were ripe for his campaign.

Sean Illing: In the book, you argue that the anger we’re seeing in rural America is less about economic concerns and more about the perception that Washington is threatening the way of life in small towns. How, specifically, is Washington doing this?

Robert Wuthnow: I’m not sure that Washington is doing anything to harm these communities. To be honest, a lot of it is just scapegoating. And that’s why you see more xenophobia and racism in these communities. There’s a sense that things are going badly, and the impulse is to blame “others.”

They believe that Washington really does have power over their lives. They recognize that the federal government controls vast resources, and they feel threatened if they perceive Washington’s interest being directed more toward urban areas than rural areas, or toward immigrants more than non-immigrants, or toward minority populations instead of the traditional white Anglo population.

But where Wuthnow challenged my assumptions was with a couple of his closing remarks.

Point one is that rural America is quite diverse. People live in farm towns or coastal towns or mining communities, or they live in the North or the South or in Republican states or Democratic states. So we have to be careful about lumping people together under one category.

Point two is that rural America does have real problems — population decline, a brain drain, opioid addiction, etc. We can make of that what we want. But that’s not the whole picture. Not every small town is full of people who are suffering and bitter and angry at Washington.

That first point is dramatized by this map from “Rural America at a Glance: 2016 Edition,” published by USDA.

What you can see is that, if you live east of the Mississippi River, rural America is mostly manufacturing-dependent with areas in the coal country of Kentucky, West Virginia, and Pennsylvania being mining-dependent. Of course in the so-called “bread basket” at the center of the country, most rural counties are farming dependent. As you head farther west, you see the reason why mining-dependent counties are clashing with recreation (as Ryan Cooper wrote about here at the Washington Monthly back in 2014).

What this means is that, while Wuthnow documented the common theme he heard across rural America about the threats they perceive, it is very likely that when it comes to specific issues like trade or the efforts by Interior Secretary Zinke to open up federal lands to the oil and gas industry, the response from rural America is likely to be very diverse, depending on their particular interests.

In terms of the USDA report, I also found this information quite interesting. 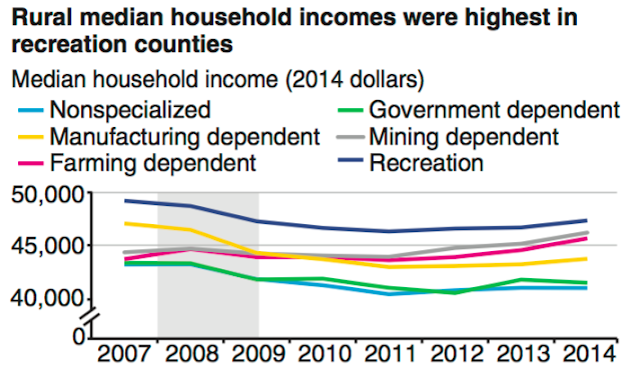 Median income for those in farming and mining communities was less impacted by the Great Recession and is rising the fastest. Manufacturing communities were the hardest hit and haven’t recovered much. Recreation took a hit during the recession, but those communities have maintained the highest median income since at least 2007.

While rural America is still predominantly white, the various communities across the country are obviously diverse in terms of their economic interests. I now know that it is important to keep that in mind when discussing the politics of rural communities—particularly when it comes to specific policies.