* The Board of Cambridge Analytica released this statement today:

The Board of Cambridge Analytica has announced today that it has suspended CEO Alexander Nix with immediate effect, pending a full, independent investigation.

In the view of the Board, Mr. Nix’s recent comments secretly recorded by Channel 4 and other allegations do not represent the values or operations of the firm and his suspension reflects the seriousness with which we view this violation.

* I believe that statement was released just prior to the latest video from Channel 4, which focused on CA’s role in helping Donald Trump’s presidential campaign.

Here’s the part that stood out to me:

The company says their work with data and research allowed Mr Trump to win with a narrow margin of “40,000 votes” in three states providing victory in the electoral college system, despite losing the popular vote by more than 3 million votes.

That is likely a reference to their efforts at voter suppression among Clinton supporters in Pennsylvania, Michigan and Wisconsin. I suspect we’ll be hearing more about that story at some point.

* Anna North writes that it was a bad day in court for Trump’s efforts to silence women.

The American public might be about to learn a lot more about President Trump’s history with women — in court.

Karen McDougal, a fitness expert and former Playboy model, filed suit on Tuesday in Los Angeles Superior Court, seeking the right to speak publicly about an alleged affair between her and Trump. She’s the second woman to file such a suit. Adult film actress Stormy Daniels sued Trump earlier this month.

Also on Tuesday, a New York Supreme Court judge ruled that a defamation suit filed against Trump by Summer Zervos, a former contestant on The Apprentice, could move forward. Zervos says that Trump sexually assaulted her in 2007.

President Trump’s legal team reached out in recent days to Theodore B. Olson, one of the country’s most high-profile and seasoned litigators, to join forces amid mounting challenges in the probe of Russian interference in the 2016 election, according to three people familiar with the discussions.

The overture came as Trump, feeling more vulnerable to the investigation led by special counsel Robert S. Mueller III, has told confidants he wants to recruit top-tier talent and shake up his group of lawyers, the people said.

But after reviewing the offer and weighing potential conflicts with his clients at Gibson, Dunn & Crutcher, where he is a partner, Olson is not planning to join Trump’s team, a top executive at the firm said Tuesday.

While Ted Olson is a Republican, he has never struck me as stupid. So the fact that he doesn’t want to join this sinking ship should come as no surprise.

* Peter Schweizer, who wrote Clinton Cash, is back at it.

In a new book, “Secret Empires: How the American Political Class Hides Corruption and Enriches Family and Friends,” conservative author Peter Schweizer argues that China has worked to gain leverage over powerful American politicians by targeting their families with investment opportunities and business deals, providing hundreds of millions of dollars in business to companies run by the families of Messrs. Biden and McConnell.

Right wing media is consumed with stories about this book. I hope it signals progress that the mainstream media is pretty much ignoring it.

One other thought, isn’t it interesting that the target of Schweizer’s smears always happen to be Steve Bannon enemies?

* Kevin Drum put a lot of data from a paper by Larry Bartels into chart form. 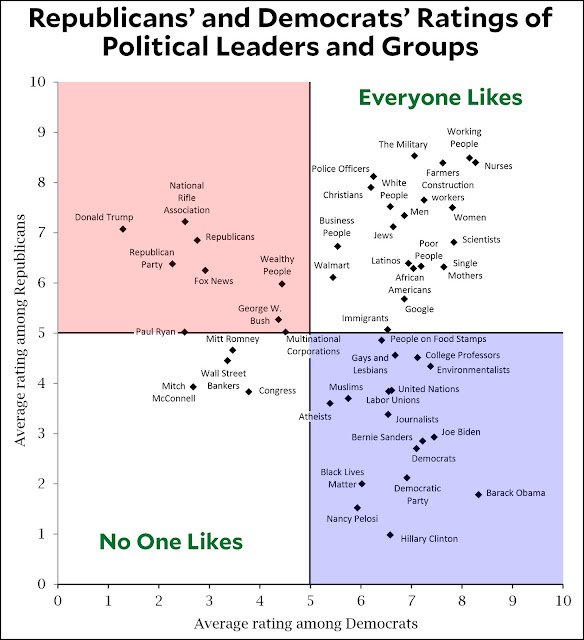 There is a ton of interesting information there. Talk amongst yourselves.

…which leads to this:

No wonder Trump-loving young men are whining about their dating prospects https://t.co/GRaSMJj2DI