* This adds a whole new wrinkle to the story about Sessions firing McCabe:

Nearly a year before Attorney General Jeff Sessions fired senior FBI official Andrew McCabe for what Sessions called a “lack of candor,” McCabe oversaw a federal criminal investigation into whether Sessions lacked candor when testifying before Congress about contacts with Russian operatives, sources familiar with the matter told ABC News.

Democratic lawmakers have repeatedly accused Sessions of misleading them in congressional testimony and called on federal authorities to investigate, but McCabe’s previously-unreported decision to actually put the attorney general in the crosshairs of an FBI probe was an exceptional move.

* The man responsible for the bombings in Austin, Texas was killed after detonating a bomb in his own car. Here’s what we know about him:

The oldest of four children, [Anthony] Conditt was homeschooled by his mother. BuzzFeed spoke to a 21-year-old woman named Cassia Schultz who said she “ran in the same conservative survivalist circles in high school as Conditt.” She mentioned that she and Conditt were a part of a social group for homeschooled kids called Righteous Invasion of Truth (RIOT).

“A lot of us were very into science; we would discuss chemicals and how to mix them and which ones were dangerous,” Schultz told BuzzFeed. “We were into weapons and stuff. A lot of us did role-playing, and RPG [role-playing games]; we’d have foam weapons and act out a battle.”

Conditt attended Austin Community College from 2010 to 2012, though he didn’t graduate. A series of blog posts he wrote for a U.S. government course at the college provide a glimpse of Conditt’s political views. The Austin American-Statesman reports that Conditt wrote about his opposition to gay marriage and abortion, and his support for the death penalty. He also advocated for the abolishment of sex-offender registries.

* Surprise, surprise…Trump is making money off of the RNC.

The majority of the RNC’s spending at Trump’s private properties last month paid for venue rental and catering at the Trump National Doral Miami resort in Florida and the Trump International Hotel in Washington. Of about $270,000 spent at both properties, most of the expenses — about $205,000 — were spent at Trump National Doral Miami, Federal Election Commission filings show.

The amounts spent at those two Trump properties comprised 86 percent of the RNC’s February expenses that were categorized specifically as “venue rental and catering.”

* When I read this, I couldn’t help but think about how Trump called these “shithole countries.”

African leaders on Wednesday signed what is being called the largest free trade agreement since the creation of the World Trade Organization.

The deal creates a continental market of 1.2 billion people, with a combined gross domestic product of more than $3.4 trillion. A major goal is to boost intra-African trade and rely less on the volatility of commodity prices that affect many exports.

The aim is to have agreement, signed by 44 of the African Union’s 55 member states, enter into force by the end of this year, said the chair of the AU Commission, Moussa Faki Mahamat. States now must ratify the deal.

Everyone’ is talking about whether Democrats can take control of the U.S. House of Representatives and about the record number of candidates running for the 435 House seats up for election this fall. 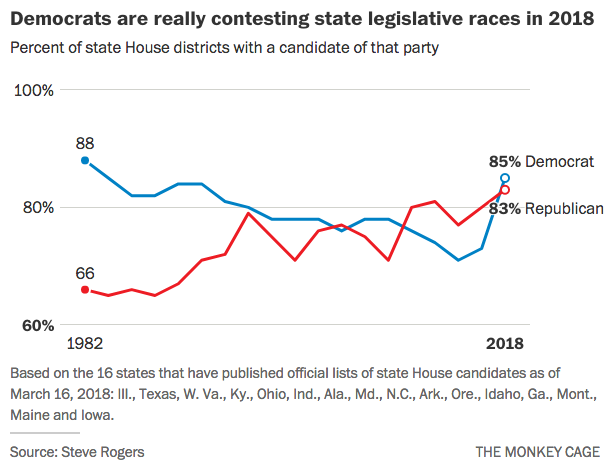 * These Parkland students continue to impress me with their insight and wisdom.

During a live-stream interview on Twitter with his classmates, activist David Hogg — a student in Parkland, Florida — said that there was a disparity in the way that news media covers gun violence, and that he felt compelled to speak up about that using his platform.

“There is a lot of racial disparity in the way that this is covered,” Mr Hogg said of last month’s shooting. “If this happened in a place of lower socioeconomic status, or a….black community, no matter how well those people spoke, I don’t think the media would cover it the same.”

“And I think it’s important that we point that out as Americans and realise that. Because, we have to use our white privilege now to make sure that all of the voices that….all of the people that have died as a result of this and haven’t been covered the same can be heard,” he continued. “It’s sad, but true.”

* Finally, a couple of other people are impressed too. Barack and Michelle Obama wrote a letter to the Parkland students. It was hand written, but here’s the transcript:

To the students of Parkland —

We wanted to let you know how inspired we have been by the resilience, resolve and solidarity that you have all shown in the wake of unspeakable tragedy.

Not only have you supported and comforted each other, but you’ve helped awaken the conscience of the nation, and challenged decision-makers to make the safety of our children the country’s top priority.

Throughout our history, young people like you have led the way in making America better. There may be setbacks; you may sometimes feel like progress is too slow in coming. But we have no doubt you are going to make an enormous difference in the days and years to come, and we will be there for you.