Much of the discussion about trade lately, especially coming from both Donald Trump and Bernie Sanders, has focused on how globalization affected manufacturing jobs in the United States. That is an accurate description of what happened almost 30 years ago.

Starting in the 1990s, improvements in communications and shipping technology made global outsourcing more feasible. Trade deals reduced tariffs and other barriers to commerce. And many once-poor nations became more integrated into the global economy, especially China.

This adjustment provided a wave of affordable goods and opened up new markets for rich countries, but it also devastated certain sectors and geographical areas, especially those involved in manufacturing low-tech products. Workers in American and Western European factory towns found themselves in competition with Chinese electronics assemblers, Indian call center employees and auto factory workers in Eastern Europe, Mexico and beyond.

But as Neil Irwin points out, that leveled off about a decade ago.

Now, globalization has entered a new phase, in which cross-border trade in goods and services is steady as a share of the economy, and the international flows of capital are lower than they were before the global financial crisis.

Here is what international trade in goods and services has looked like since 1980: 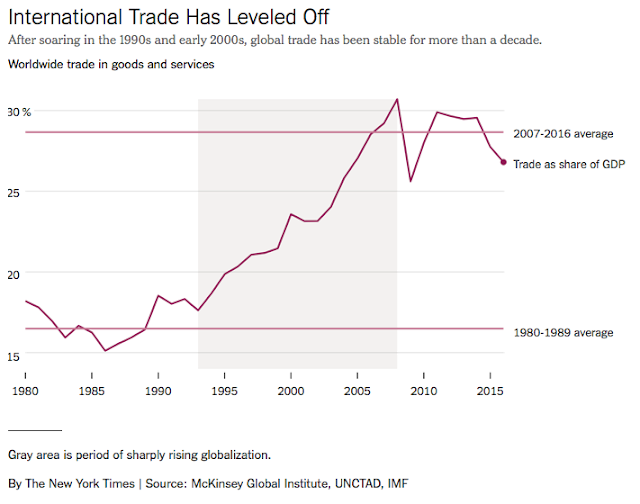 In addition to that:

If you look at the international flow of money instead of goods and services, the results are even more stark. Cross-border financial flows peaked in 2007 at 22 percent of world G.D.P., but were down to 6 percent in 2016, about the same as the 1996 level.

What Irwin finds ironic is that an anti-globalization movement is taking shape just as the benefits of trade start to shift in our direction. Some of that is because of a growing global middle class that is able to demand higher wages and purchase more of our products. In 1990, only 23 percent of the world’s population made enough to be considered middle class. Right now, the number stands at 45 percent. I am reminded of the old adage about Henry Ford paying his workers enough to be able to afford the cars they were producing. That might be the stuff of myth-making, but there is a lot of truth to the idea that a growing middle class is how economies expand.

In addition to that, the growing trade challenge is not going to be in manufacturing, but information and connectivity.

That includes more people using social media platforms to connect with people in other countries, companies relying on freelance labor located around the globe, and small enterprises doing business with partners around the world through the internet.

In other words, it’s not a form of globalization that endangers factory jobs, but one that could have big consequences in other areas — leading to more competition for technologically advanced white-collar jobs, while also creating enormous new opportunities for American and Western European firms.

Interestingly enough, that is why the Trans-pacific Partnership trade agreement focused so much attention on intellectual property rights and things like data security.

An awful lot of Americans are engaged in a debate about trade that might have had some bearing 25-30 years ago, but is pretty irrelevant today. Pretending that the entire globe can turn the clock back to a time before the beginning of the 1990s has gotten in the way of a clear-eyed assessment of what is happening today and what we need to do to prepare for the future. But then, that statement fits for a lot of what we’re experiencing with the Trump administration.

How blue America can save the country from a far-right authoritarian movement taking over the Republican Party.

From Watergate to the Big Lie, attorneys on the wrong side of the ethical line should face disbarment and sanctions.

Youngkin was dishonest about parents being pushed out of book selection, and the Democrat made an unforced error. @Monthly presents the anatomy of a Democratic debacle.

In which I ask a few questions that an enterprising local journalist might want to pose to the columnist-turned-aspiring-politician.