Since Donald Trump announced that he was running for president, he has been lying about immigration. Here’s what he said that day:

The U.S. has become a dumping ground for everybody else’s problems.

The only partially true thing he said was to basically admit that he doesn’t know what’s happening. Since Trump was elected, his administration’s entire immigration policy has been based on four big lies.

Lie number one: Undocumented immigrants are pouring across our border

The foundation for many of the lies Trump tells rest on his claim that illegal immigrants are pouring across our border. That is the particular lie on which he bases his commitment to a border wall. Here is the truth:

From an all time high of 1.64 million in 2000, federal authorities counted 303,916 apprehensions along the Southwest border in 2017. That number trended downwards through the Bush and Obama administrations. Not everyone who crosses illegally gets caught and detained, but the measure is widely viewed as a barometer of the ebb and flow. 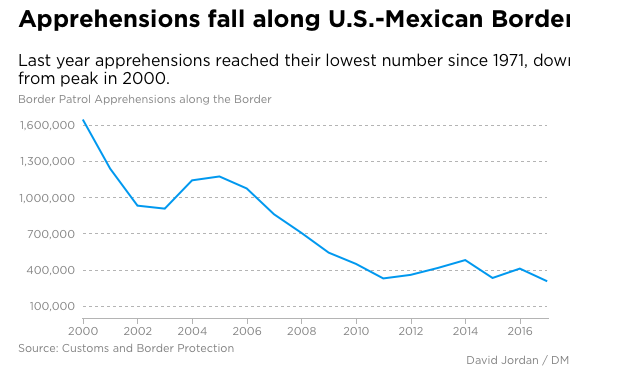 As Trump alluded to on the day he announced his candidacy, we hear a constant refrain about how immigrants are criminals. The two policies that are the result of that lie are his “deport ’em all” strategy and his attacks on so-called “sanctuary cities.” Here’s the truth:

According to data from the study, a large majority of the areas have many more immigrants today than they did in 1980 and fewer violent crimes. The Marshall Project extended the study’s data up to 2016, showing that crime fell more often than it rose even as immigrant populations grew almost across the board.

In 136 metro areas, almost 70 percent of those studied, the immigrant population increased between 1980 and 2016 while crime stayed stable or fell…

In general, the study’s data suggests either that immigration has the effect of reducing average crime, or that there is simply no relationship between the two, and that the 54 areas in the study where both grew were instances of coincidence, not cause and effect. This was a consistent pattern in each decade from 1980 to 2016, with immigrant populations and crime failing to grow together. 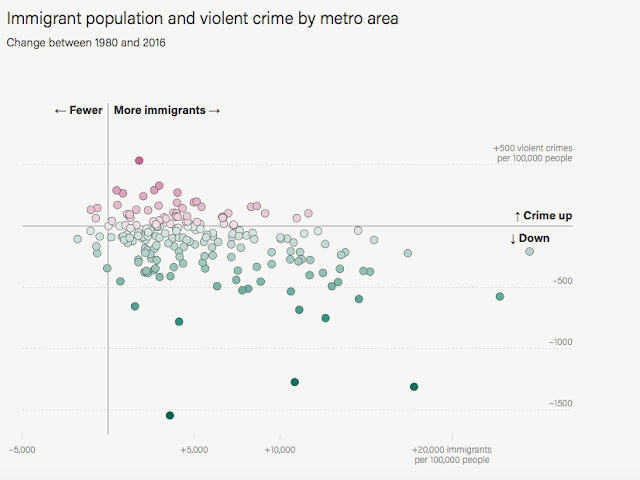 This one assumes that jobs are scarce right now and that American citizens are losing out to immigrants. That forms the basis for both the administration’s “deport ’em all” strategy when it comes to undocumented immigrants as well as the changes they have proposed to legal immigration. Here’s the truth:

In Dallas, the King of Texas Roofing Co. says it has turned down $20 million worth of projects in the past two years because it doesn’t have enough workers.

In the San Francisco Bay Area, Joe Hargrave is expanding his successful Tacolicious chain of restaurants, but says he is building smaller ones due to “a massive shortage of restaurant workers.”

And in Florida, Steve Johnson, who harvests oranges for the citrus industry, says, “Right now, if I had 80 guys, I could put every one of them to work.”

As hiring accelerates and the labor market tightens thanks to a steady U.S. recovery, employers who need low-skilled workers are increasingly struggling to fill vacancies. One big reason: Mexican workers, who form the labor backbone of industries like hospitality, construction and agriculture, are in short supply.

Trump has regularly suggested that immigrants and refugees pose a threat to national security. That is why he has attempted to institute a travel ban—which was supposed to be temporary while the administration crafted its “extreme vetting” procedures. Here’s the truth:

In the past 41 years, no American has been killed on US soil by a terrorist from any of the seven countries included in President Donald Trump’s controversial executive order on immigration. That’s one of the findings of a comprehensive look at foreign terror on US soil analyzed by Alex Nowrasteh of the libertarian Cato Institute...

* The chance an American would be killed by a foreign-born refugee is 1 in 3.64 billion per year, based on the last 41 years of data.

* The chance of an American being murdered by an undocumented immigrant is 1 in 10.9 billion per year.

* The chance an American could be killed by a someone on a typical tourist visa was 1 in 3.9 million.

All of that data is relatively easy to find. So why does the administration continue to lie and assume that it will be effective? I would propose that it is because they aren’t aiming for a rational discussion about immigration. Instead, they are making an emotional appeal to our fears. It is part and parcel of the efforts to promote a white identity movement, as I discussed yesterday because, just as crime conjures up images of black people, immigration at this time in our history creates images of brown people. Trump tipped his hand about all of this when he referred to immigrants from “shithole” countries. Alongside commentary like what we recently heard from Tucker Carlson, it instills a fear of displacement for white people.

While it is important to combat these lies with a story of America that embraces our values and ideals, we must also imbue that story with the facts that expose the lies.