By now we’re all aware that Jerry Falwell, Jr., president of Liberty University, is one of the most vocal white evangelical leaders in support of Donald Trump’s presidency. But did you know that the students of Liberty University are producing a film titled, The Trump Prophecy?

The question either infuriates or intrigues tens of millions of Americans: Did God play a role in the victory of Donald Trump? The debate will soon be presented in movie theaters across the country, as evangelical megaschool Liberty University is making and releasing a film called “The Trump Prophecy.”

The film, which will be released in 1,200 theaters this fall, is Liberty’s largest production to date, and it pairs the university with an independent Christian filmmaker who raised $1 million for the project — a sum its director says could double with postproduction and distribution costs.

The movie is based on a book titled “The Trump Prophecies: The Astonishing True Story of the Man Who Saw Tomorrow . . . And What He Says Is Coming Next, by Mark Taylor, who was a Florida firefighter suffering from anxiety and depression in 2011 when he began to hear from God that Trump would become president. These days he calls himself a prophet. In other words, it is the latest attempt to suggest that Trump’s presidency was divinely ordained.

If, like me, you wonder how evangelicals can convince themselves that God ordained what might be the most amoral man to ever occupy the White House, the answer can be found in “vessel theology.”

Many evangelical speakers and media outlets compare Trump to Cyrus, a historical Persian king who, in the sixth century BCE, conquered Babylon and ended the Babylonian captivity, a period during which Israelites had been forcibly resettled in exile. This allowed Jews to return to the area now known as Israel and build a temple in Jerusalem. Cyrus is referenced most prominently in the Old Testament book of Isaiah, in which he appears as a figure of deliverance.

The whole idea of “vessel theology” is based on the fact that Cyrus was not a Jew, but became the vessel God used to end their Babylonian captivity. This allows evangelicals to dismiss Trump’s amorality and believe that he has been divinely ordained to restore a “Christian America.”

Given that it was Cyrus who allowed the Jews to return to Israel and build the temple in Jerusalem, Trump’s decision to move the U.S. embassy to that city, with all its prophetic significance related to the coming apocalypse, is seen as proof that this president is part of God’s plan. Israeli Prime Minister Benjamin Netanyahu played right along during his visit here in March.

Thanking Trump for moving the American embassy to Jerusalem, Netanyahu said, “We remember the proclamation of the great King Cyrus the Great — Persian King. Twenty-five hundred years ago, he proclaimed that the Jewish exiles in Babylon can come back and rebuild our temple in Jerusalem…And we remember how a few weeks ago, President Donald J. Trump recognized Jerusalem as Israel’s capital. Mr. President, this will be remembered by our people throughout the ages.”

The Israeli organization Mikdash Educational Center even minted a commemorative coin featuring Trump’s profile alongside one of Cyrus for the occasion. 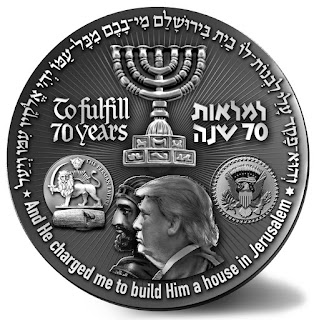 The whole Cyrus/Trump comparison seems to have been dreamed up by a shyster named Lance Wallnau. He also wrote a book titled, “God’s Chaos Candidate,” predicting that Donald Trump would become president. You can hear him explain to a gushing Pat Robertson that Trump would be “a wrecking ball to the spirit of political correctness.” Just as Cyrus was ordained by God to end Jewish captivity, the chaos created by Trump will destabilize the “progressive institutions” that evangelicals have been fighting against for decades.

That, my friends, is how you create a narrative to fool 85 percent of white evangelical Christians into supporting an amoral con man who is mentally unstable. The conspiracy theories we’re hearing from people like Sean Hannity and Alex Jones have nothing on these guys. If you think that Karl Marx went too far in calling religion the opiate of the masses, perhaps you would agree that throughout history, it has been one of the most effective propaganda tools ever invented by the rich and powerful. Never has that been more true than today.