I agree with a lot of Frank Bruni’s take in an article titled, “How to Lose the Midterms and Re-Elect Trump.” He suggests that outbursts like those we saw from Robert De Niro at the Tony Awards simply mirror what we find offensive about Trump.

When you answer name-calling with name-calling and tantrums with tantrums, you’re not resisting him. You’re mirroring him.

It should be obvious to liberals that being more like Trump is not the answer, it is simply joining him in the gutter. But the interesting thing is, even Bruni goes to great lengths to point out that Democrats who are actually winning primaries aren’t mirroring Trump.

In the primaries last week and on Tuesday, Democratic voters by and large chose House candidates whose appeals were tempered and whose profiles make them formidable general-election contenders…

The results in Virginia’s 10th Congressional District on Tuesday were a perfect example. State Senator Jennifer Wexton, a former federal prosecutor, won, and will take on the Republican incumbent, Barbara Comstock. That was precisely what Republican strategists didn’t want, and at the beginning of the year, they chattered hopefully about Wexton’s being thwarted by more strident Democratic rivals to her left. But she beat the second-place finisher by almost 20 points.

Here’s a question for Bruni: In the last week, what story got more attention in the media, winning candidates like Wexton or Robert De Niro’s profanity about Trump at the Tony Awards? Of course De Niro got more attention in right wing media, but they are going to exploit anything a liberal says, no matter whether it’s measured or profane. But you’d be hard-pressed to find an American who didn’t know what De Niro said, no matter what media they consume.

Over and over again Bruni suggests that the way to win over “less fiercely partisan voters” is to be less hysterical and more measured. The huge fallacy in that argument is that the media doesn’t cover “measured,” perhaps because it doesn’t attract readers and viewers.

What became painfully apparent in the 2016 presidential race is that the media paid no attention to discussions about the issues and instead, focused almost entirely on scandals, especially those about Hillary Clinton as a way to “balance” their reporting about Donald Trump. That was made abundantly clear in a report from the Berkman Klien Center at Harvard titled, “Partisanship, Propaganda and Disinformation: Online Media and the 2016 Presidential Election.” 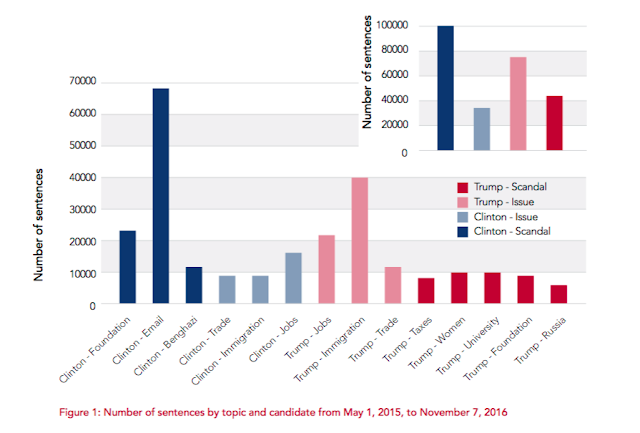 Trump’s entire campaign was focused on raising hysteria over issues, but the media paid almost no attention to Clinton’s measured policy proposals to address those issues. Instead, they stirred up hysteria over Clinton’s email and the family’s foundation.

Using words like “measured” and “hysterical” is a way to reinforce the binary in this culture that we have to chose between thinking and feeling. If I’ve learned nothing else in my life, it’s that a focus on one of those to the exclusion of the other will always lead us astray. We got a perfect example of that in the last election with Clinton being the thinker and Trump being the feeler—which is actually an interesting reversal of traditional gender rolls. Because feelers tend to generate more readers and viewers, that became the media focus and gave a definite advantage to Trump.

My personal preference would be for politicians who, as thinkers, can present measured policy prescriptions while doing so in a way that taps into our more positive emotions with a clear vision of who we are and where we want to go. If I’m forced to chose between measured and hysterical, I’m more likely to go with the former. But that isn’t the choice most of our media will make. They fuel the hysterical, and as long as that is the case, De Niro’s profanity will get a lot more attention than anyone who takes a more measured approach.