As the 2016 presidential election was getting underway, here is how the New York Times described what was going on:

They are angry at a political system they see as rigged. They feel squeezed by immigration, or the power of big banks. They sense that America is heading in the wrong direction, but emphatically believe only their candidate has the strength and vision to change things.

The voters driving two of the more remarkable movements of this election cycle — for Donald J. Trump and Senator Bernie Sanders — share striking similarities. Both groups are heavily white, more male than female, and both are fueled partly by people who, in interviews, express distrust of their parties and the other candidates, especially Hillary Clinton.

That proved to be true throughout the election because the “heavily white, more male than female” voters were indeed angry. 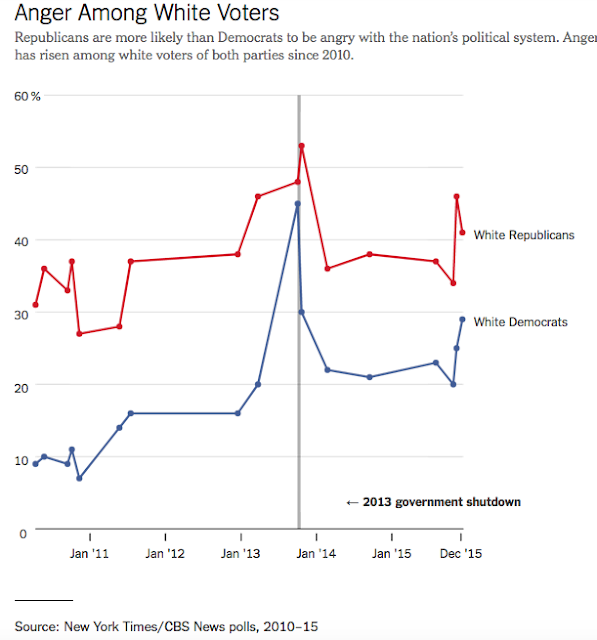 The election was followed by an obsession among reporters, pundits, and political scientists attempting to document just what it was that Trump supporters were so angry about. No one can dispute the fact that the train Donald Trump rode to victory was one of tapping into white male anxiety. Democrats have been lectured constantly about the need to empathize with their anger.

As we head into the 2018 midterms, it’s Democrats—more of whom are women and people of color—that are anxious and afraid of what is happening to this country under the Trump administration. All of the sudden we’re hearing lectures on civility and warnings about how anger is divisive. Here’s Michael Scherer on that:

Growing liberal agitation over a pivotal Supreme Court retirement and a simmering crisis about immigrant child separation have left Democratic leaders scrambling to keep the political outrage they’d counted on to fuel midterm election wins from becoming a liability for the party.

That raises an obvious question: who gets permission to be angry in America? Rebecca Traister answered with an article titled: “The Summer of Rage.”

But it’s not just in the numbers; it’s also in the quotidian realities of living in this country. The suffocating power of our minority rule is evidenced by the fact that we’re always busy worrying about the humanity — the comfort and the dignity — of white men, at the same time discouraging disruptive challenge to their authority.

I am reminded of something Adam Serwer wrote recently.

An era in which Americans are supposedly exhausted with political correctness is thus defined by the acute political sensitivities and persecution complexes of white voters who object if things they do and say are described as racist, even as the bodies pile up in the background.

Contrasting the demands to do away with “political correctness” with the recent calls for civility underscores the point.

And this pic I will keep pulling up every day until this is over…. pic.twitter.com/A9XJOL6ryt

Traister is right, the true minority in this country are constantly validated in their anger in ways that sometimes are obvious and others that are more subtle. Women and people of color have been lectured about civility for generations. As many people noted during Obama’s presidency, this double standard had right wingers desperate to label him just another angry black man. One of the most powerful pieces I read about that came from Frank Vyan Walton.

That’s what they want to turn Obama into. The Angry Black President.

And that’s also why he resists. It may be infuriating. It may be crazy making. But this is the double-bind that many Black people have had to face all the time when these slights and broadsides come at them with racial undertones, but few clear or logical overtones…

I’ve lived with that internal, mental battle my entire life – and I very nearly have reached the “Fuck IT/FUCK YOU!” point more than once. Generally speaking, it didn’t help much.

That’s not the road Obama intends or needs to go down, sorry.

As a woman, Hillary Clinton was not allowed to be angry either. She was constantly called “shrill” while being told to smile more and shout less.

But Obama and Clinton were merely representative of the thousands of women and people of color who are constantly told to be “civil” in how they express their anger as everyone tries to empathize with white male anger. To me, the latter demand was never the heart of the problem, it is that it has always been a one-way street in this country.

The truth is that, in the situation we face right now, that double standard is becoming more dangerous. One way to look at that is to remind ourselves of how the current president conducted himself during the campaign.

Some examples of what we’ve seen since he got elected are calls for the police to get rough, Muslim travel bans, and the terrorizing of asylum seekers on our border. Similarly, rights that have protected both women and people of color are under assault and could disappear soon via an extremist Supreme Court.

The white male minority in this country enshrined their supremacy in our founding documents. As Traister wrote, “The documents that encoded the participatory democracy of which Americans tend to be so proud expressly barred the electoral, civic, and economic participation of the nonwhite and the non-male.” That is why the minority continues to favor “originalists” on the Supreme Court.

It’s not just that women and people of color form a majority in this country. They are now “crashing the gates” (hat tip to Markos Moulitsas for the phrase) of power. That’s why Traister ends with this:

One reason that the fury of women is regularly dismissed as theatrical and marginal and unserious is precisely because, on some level, the powerful must sense that it is the opposite of all of those things. That, in fact, it presents a very real threat…The reason the anger of a majority gets suppressed is because it has the power to imperil the rule of the minority.

Right now Democrats are being told that they have to chose between anger and hope. As an aside, I don’t remember that quandary ever being posed to the Trumpsters. But hope for something better is the North Star that guides the engagement of anger. We wouldn’t be so angry if we didn’t have hope. That is precisely why so many women and people of color are organizing and running for office. The minority sees that as a threat and responds by saying “Sit down, shut up, and be civil.” That’s not going to happen.