Seriously Ms Clinton? That’s how you celebrate the greatest nation on Earth?
This is downright UNPATRIOTIC!!

Frankly, I was a bit shocked that the right wing has descended so far down the extremist rabbit hole that a picture of the Statue of Liberty and a statement about building a more perfect union is now viewed as unpatriotic. But it’s obvious that Lady Liberty, who has welcomed immigrants and refugees to this country for over 130 years, presents a problem for the nativists these days. Remember when Stephen Miller actually made the case that the statue doesn’t represent U.S. immigration policy and dismissed the “New Colossus” poem as nothing more than a late add-on?

Whenever this topic comes up, I think back to what Stephen Miller told Joshua Green about this administration’s strategy.

“The media tends to cover immigration issues through the frame of how it impacts everybody but actual citizens of the United States,” Miller complains…

Miller and Bannon want Trump to undertake a radical recasting of U.S. policies, from immigration to trade to taxation, that would invert this frame by making the interests of [white] U.S. citizens (or what Miller and Bannon perceive to be their interests) predominant, almost to the point of exclusivity.

In other words, the traditional frame used to talk about immigrants and refugees has been to focus on their plight, which engenders sympathy for them. Folks like Miller have set out to flip that narrative via fear-mongering about the threat posed by immigrants and refugees. To do so, they’ve had to lie and demonize the entire group. Here’s the problem with that: 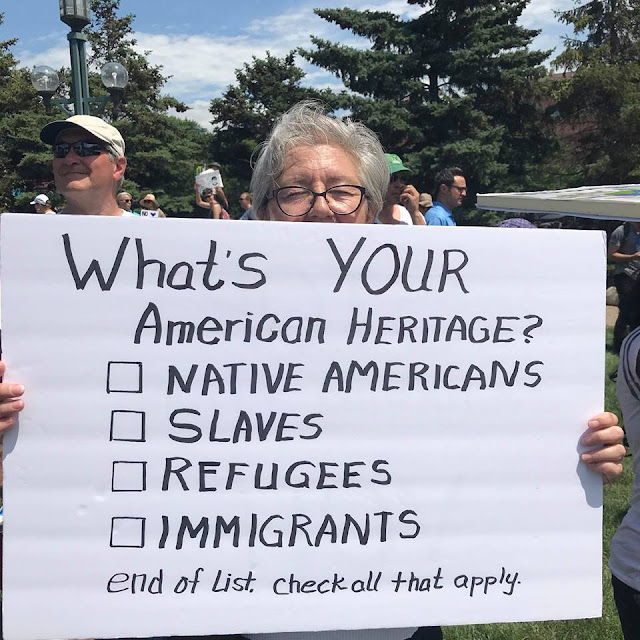 Unless you are Native American or the descendant of slaves, we’re all refugees and immigrants.

In the end, this administration’s nativist policies aren’t actually aimed at all immigrants and refugees. Trump pretty much gave the game away when, during his diatribe about “shit hole” countries, he said we need more immigrants from countries like Norway. The goal here is to demonize black and brown immigrants and refugees. But it’s kinda hard to do that without speaking the racist parts out loud. That’s why the best description of this administration’s immigration policies is to call them what they are…white nationalism. From that perspective, embracing the Statue of Liberty in these times is considered unpatriotic.