The job of political pundits at this point in the election cycle is to point out patterns that are emerging in the electorate. To me, the most fascinating (and erroneous) form is the constantly swinging pendulum that assumes the Democratic primaries are some kind of contest between “centrists” and “progressives” or between the “insurgency” and the “establishment.” That kind of analysis is similar to taking the round peg of the 2018 primaries and attempting to shove it into the square hole of the 2016 presidential primary. Joan Walsh documented the latest efforts from this week’s results.

At least five big articles have made that point in the last 24 hours: “Democratic Party’s liberal insurgency hits a wall in Midwest primaries,” The Washington Post declared. “The far left is losing,” U.S. News & World Report screamed. Politico hit the story twice, with “Down goes socialism” and “Bernie and his army are losing 2018.” CNN weighed in with “Alexandria Ocasio-Cortez’s movement failed to deliver any stunners Tuesday night.”

It’s important to keep in mind that a little over a month ago, that script was flipped and the narrative was about extremists taking over the Democratic Party. The month before, the story was all about the centrists beating the radicals. Seriously, if heads aren’t spinning from all of that flip-flopping, then we really do have the attention span of gnats. Sooner or later, aren’t people going to wake up to the fact that the narrative they want to force onto these primaries doesn’t fit?

In the midst of all that, leave it to the folks at FiveThrityEight to take a data approach to identifying the patterns.

Through Aug. 7, 811 people have appeared on the ballot this year in Democratic primaries for Senate, House and governor, not counting races featuring a Democratic incumbent.  In partnership with ABC News and Ballotpedia, we collected data on every single one of those candidates. We’ve pored over campaign websites, news reports, state election websites, official campaign filings and more to figure out each candidate’s gender, race, sexual orientation, career background, policy positions and endorsements.  The data gives us the most comprehensive look yet into whom Democratic primary voters are gravitating toward this year.

Of course, they produced a chart to summarize the results. 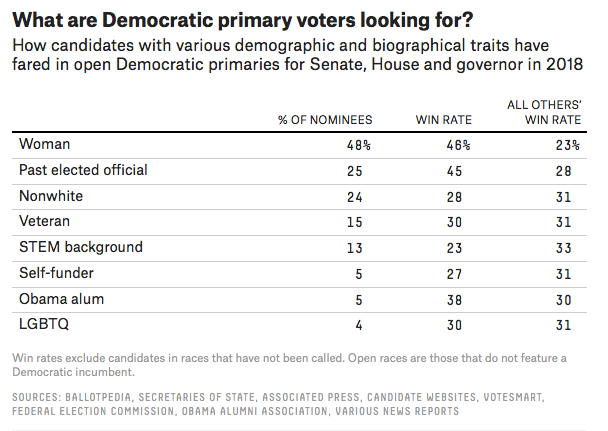 You can read their analysis on each of these categories, but based on those numbers and other results they reported, the average “win rate” seems to be about 30 percent. With that in mind, it’s clear that women candidates and those with past experience as elected officials are significantly over-performing. While not as significant, Obama alums are also looking strong. Veterans and LGBT candidates are doing about average, while nonwhite and self-funders are performing a bit below average. Candidates with STEM backgrounds aren’t doing all that well.

Once again, the data suggests that the big story coming out of the 2018 Democratic primaries so far has been about the historic number of women running and winning. The folks at FiveThirtyEight put it this way, “All else being equal, being a woman has been worth an additional 10 percentage points.” When we get as much analysis about what that means for the Democratic Party as we have about the divide between centrists and radicals, we’ll be getting the real story about what’s happening before the 2018 midterm elections.