A lot of the focus on the midterm elections has been about how things are shaping up for control of both the House and Senate. That isn’t just because we tend to pay more attention to national politics; the immediacy of doing something to hold Trump accountable is critical.

But as a lot of people have pointed out, the long-term issue for Democrats is at the state and local level. That is evidenced by the fact that right now, Republicans control 33 governorships and the makeup of state legislatures looks like this: 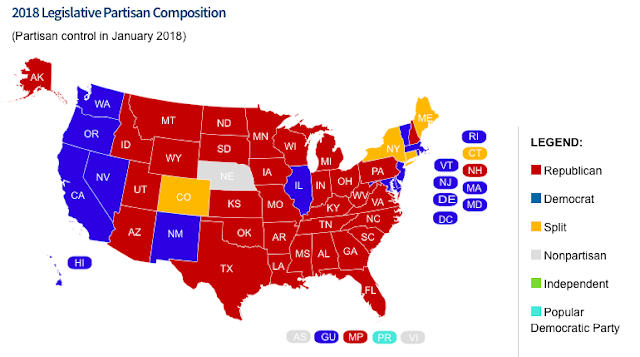 The result is that all over the country, Republicans have near total control over what happens at the state and local level.

That is what makes the governor’s races in November critical. Anyone elected this year will preside over their state’s redistricting after the 2020 census. Maps will be redrawn that not only affect House races, but state legislative districts as well.

As we head into the end of summer and the fall election cycle gears up another notch, Democrats have a lot to be hopeful about when it comes to those gubernatorial elections. A couple of weeks ago there was a lot of talk after critical primaries in Midwest states about the potential gains for Democrats. Then this week’s win by Andrew Gillum in Florida and David Garcia in Arizona demonstrated that, combined with Stacey Abrams’ victory in Georgia, Democrats are going to test a whole new strategy for politics in the South that could be a game-changer. Ed Kilgore explains.

So what are the prognosticators saying about the governor’s races? At this point, no one with any credibility is forecasting that a single state will flip from Democrat to Republican. Some people thought that might be possible in my home state of Minnesota if Tim Pawlenty was the Republican nominee. But he lost the primary to Jeff Johnson while Democrats chose Tim Walz, who currently represents a primarily rural district in the House.

Most people are predicting that Democrats J.B. Pritzker in Illinois and Michelle Lujan Grisham in New Mexico will win to turn those governorships from red to blue.

Looking at the predictions from both Real Clear Politics and the Cook Political Report, there are a total of ten states that currently have Republican governors where the race is rated a toss-up by one or both groups. Here’s the list and the name of the Democratic candidates:

If you’re looking for trends in the list of names, you won’t find it in the kind of themes that are coming from most cable news analysis. I’d suggest that Tennessee and Kansas are on the list due to local personalities and issues, while Ed Kilgore’s analysis up above explains most of the remaining races.

As we get more polling this fall, the list of states that are toss-ups will likely decrease. But the big take-away right now is that Democrats have fielded a slate of candidates who are competitive or leading in 12 states with Republican governors. To the extent they can be successful, it will be the next big step in building Democratic majorities both locally and nationally.