If you haven’t already, I recommend that you read Christine Blasey Ford’s account of what Brett Kavanaugh did to her when the two of them were in high school.

While his friend watched, she said, Kavanaugh pinned her to a bed on her back and groped her over her clothes, grinding his body against hers and clumsily attempting to pull off her one-piece bathing suit and the clothing she wore over it. When she tried to scream, she said, he put his hand over her mouth.

“I thought he might inadvertently kill me,” said Ford, now a 51-year-old research psychologist in northern California. “He was trying to attack me and remove my clothing.”

Ford said she was able to escape when Kavanaugh’s friend and classmate at Georgetown Preparatory School, Mark Judge, jumped on top of them, sending all three tumbling. She said she ran from the room, briefly locked herself in a bathroom and then fled the house.

Ford went on to say:

“I think it derailed me substantially for four or five years,” she said. She struggled academically and socially, she said, and was unable to have healthy relationships with men. “I was very ill-equipped to forge those kinds of relationships.”

The reactions from many Republicans to a story like that is a reminder to women about where that party stands on these kinds of issues. For example, there is the immediate attempt to deny the allegations and find something to discredit the accuser. Most often there is an attempt to divide victims into those who are Republican and those who are Democrats, because the latter must simply be lying for “political” reasons. It’s as if sexual assault came with a party label.

All of that is pretty standard fare that we’ve seen happen over and over again. But because the allegations being brought forward by Ford happened when she and Kavanaugh were in high school, we’re witnessing reactions from Republicans that are even more cruel and dismissive. For example, there is this from Republican political consultant Ed Rollins:

If this is the new standard, no one will ever want or be able to serve in government or on the judiciary.

That is the equivalent of a suggestion that bragging about sexual assault is merely “locker room talk,” which is equally offensive to both women and men. He is not only dismissive of the allegations, but implies that “everyone does it.”

But leave it to Donald Trump’s progeny to be the standard bearer when it comes to mocking a woman over allegations of sexual assault. Here’s what Don, Jr. posted on Instagram yesterday: 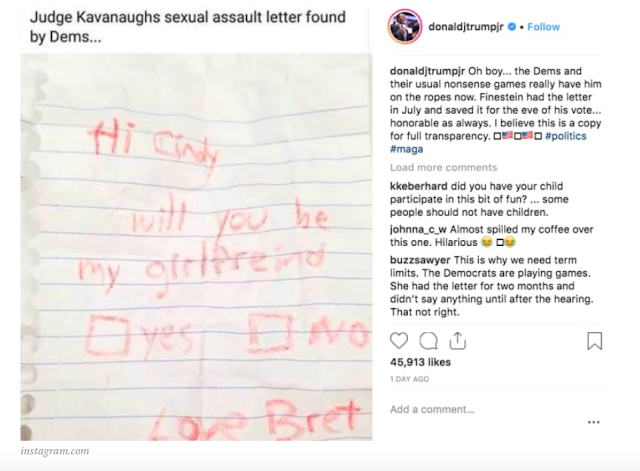 Those are just two examples of what we’ve seen in response to Ford coming forward with her allegations.

Over the years, Republicans have reminded women over and over again that they don’t take sexual assault seriously. Regardless of what you think about Brett Kavanaugh or Christine Blasey Ford’s allegations, we’re getting a good reminder of the fact that they still don’t.

Beyond all of that, Eric Levitz reminds us that some of the people who are being dismissive about allegations that a teenager committed sexual assault are the same ones who want children as young as 13 to be tried as adults and teenagers to be labelled as sexual predators for life because they texted naked pictures of themselves. The guy who nominated Kavanaugh to the Supreme Court called for the execution of five teenagers in New York before they even stepped into a court room, where they were eventually found to be innocent based on DNA evidence.

In other words, what we are about to witness when it comes to Kavanaugh is a lot of pearl-clutching that is not only dismissive of the trauma of sexual assault, it is about how boys make “mistakes” when they’re young and grow up to be men of fine character. The problem is that all too often that kind of compassion is only extended to white boys who went to fancy prep schools.