The president is going to double-down on his lie that a caravan of asylum-seekers poses a major threat to this country.

The Pentagon announced Monday that it will send up to 5,200 troops to the border ahead of the anticipated arrival of a caravan of Central American migrants that President Donald Trump has warned would not be able to enter the country. These troops, which “are in fact deploying with weapons” will join up to 2,000 National Guards already at the border for a combined force of about 7,200—or about the same amount of U.S. soldiers involved in the battle against the Islamic State militant group (ISIS) in Iraq and Syria.

In addition, a U.S. Defense Department official with knowledge of the deployment—known officially as Operation Faithful Patriot—told Newsweek that “the units deployed right now are of actual strength between 5,000 and 7,000. With another 7,000 on standby on 24-hour notice.”

On October 13, a group of asylum seekers departed the city of San Pedro Sula, Honduras and has since reached Tapanatepec in Oaxaca, Mexico. From a peak of about 7,000 people last week, the estimated number of migrants was more recently placed at 3,500.

Someone in the administration has apparently decided that this group of desperate people requires a military response that is not only armed with weapons, but is twice its size in terms of numbers. But here’s all you need to know in order to understand what this is all about:

Trump is sending 5200 troops to the border. THIS IS ALL THEATER

The caravan is 1,000 miles + from the U.S. border, has fewer than 5000 people and is traveling about 20 miles per day pic.twitter.com/biyqcI2kvy

If they walk 20 hours/day some of the dehydrated Hondurans might reach Operation Faithful Patriot in time for the next War on Christmas.

Even if you are scared of the threat posed by this group of asylum-seekers, it will be months before they arrive at the U.S. border. By then, a lot of people in this country will be celebrating the birth of a refugee whose family was given shelter in a stable. That will pose a bit of irony, won’t it?

In the meantime, this deployment of troops was announced one week prior the midterm elections. It is impossible to escape the fact that the United States military has been politicized in a way that should bring shame on everyone involved in this decision.

The vacuousness of the Republican message heading into these elections should now be on display for everyone to see. Just as they did with “death panels” in 2010 and Ebola in 2014, they have either created or exaggerated a crisis beyond all proportion in an attempt to frighten voters because that’s all they’ve got.

As this particular example was developing over the last few days, I was reminded of a speech Michelle Obama gave way back in 2007 where she talked about her decision to support her husband in running for president.

The reason why I said “yes” was because I’m tired of being afraid. I am tired of living in a country where every decision we made over the last 10 years wasn’t for something, but because people told us we had to fear something. We had to fear people who look different from us. Fear people who believed things that were different from us. Fear of one another right here in our own backyards. I am so tired of fear.

In the face of an actual threat, fear is an appropriate response. We must then decide whether to respond with caution or courage. But when the threat is manufactured, as is happening right now, fear is a sign of weakness. Nowhere is that more obvious than a decision to send over 5,000 troops to our southern border in response to a group of desperate migrants. Someone needs to ask this president why he thinks the United States is so weak that we can’t respond humanely and legally to this situation. Those who support this move by Trump need to ask themselves the same question. We should also ask them if they ever get tired of being manipulated by fear.

For a response to fear that emanates from strength, no one said it better than Audre Lorde. 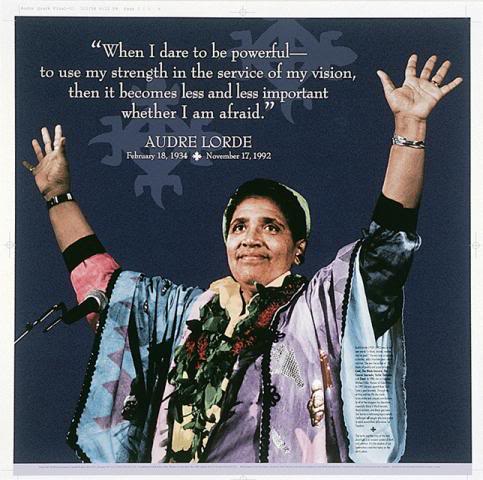