According to Michael Isikoff, Donald Trump and his enablers might finally be getting their wish, because the whole Mueller probe could be coming to an end very soon.

Special counsel Robert Mueller’s prosecutors have told defense lawyers in recent weeks that they are “tying up loose ends” in their investigation, providing the clearest clues yet that the long-running probe into Russia’s interference in the 2016 election may be coming to its climax, potentially in the next few weeks, according to multiple sources close to the matter.

A Flynn sentencing memo is due Tuesday, and memos about Manafort and Cohen are slated for Friday. All three documents are expected to yield significant new details on what cooperation the three of them provided to the Russia investigation.

Before getting to the important news on what all that means, let’s put to rest the idea that this has been a “long-running probe.” Keep in mind that Mueller has been investigating one of the most significant criminal allegations in this country’s history: whether or not an adversarial foreign government attempted to interfere in a presidential election, as well as a possible conspiracy with one of the candidates who went on to be president. With that in mind, the folks at FiveThirtyEight developed a helpful chart to compare both the timing and results of this probe with those of previous administrations. 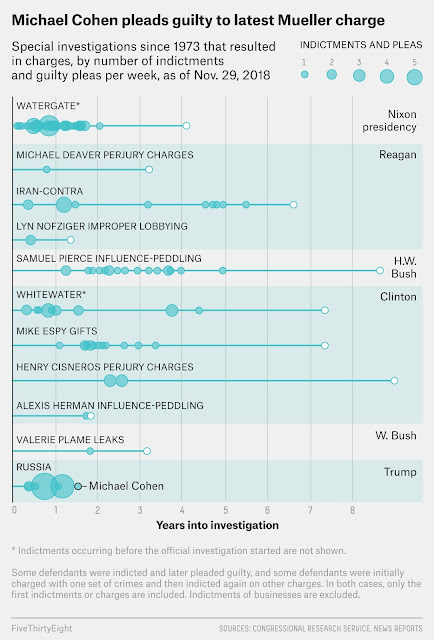 If Mueller is, indeed, “tying up loose ends,” this investigation will not only be the most consequential, but the shortest in recent history.

Besides reporting that the Mueller investigation might be coming to a conclusion soon, Isikoff notes that the special counsel will be releasing reports for the sentencing hearings of Michael Flynn, Michael Cohen and Paul Manafort this week. All three have pleaded guilty to crimes in exchange for their cooperation and will soon be sentenced.

However, the special counsel has accused Manafort of violating his agreement by lying to investigators. As part of their status report, prosecutors wrote that “The government will file a detailed sentencing submission to the Probation Department and the Court in advance of sentencing that sets forth the nature of the defendant’s crimes and lies, including those after signing the plea agreement herein.” That is the document Mueller will be filing on Friday.

There was some speculation about whether or not that document would be made public. Isikoff broke the news:

Peter Carr, spokesman for the special counsel, confirmed to Yahoo News on Monday that the Manafort memo “will be public,” although he added there could be some portions that are redacted or filed as a sealed addendum.

To casual observers, Robert Mueller has run a tight ship when it comes to leaks and played his cards pretty close to his vest. But there’s been an ongoing discussion among lawyers that when he has produced documents in this case, they have been what is often referred to as “speaking indictments.”

Those waiting for Mueller to issue some massive, 9/11 Commission–style report at the end of the investigation often overlook the sheer volume of detailed information Mueller has pushed into public view already. Nearly every court document he has filed has been what lawyers call a “speaking indictment,” going into deeper detail and at greater length than is strictly needed to make the case for the criminal behavior charged.

The most specific example of that is the indictment filed against the Russians.

It is unclear precisely why Mueller is using speaking indictments, but people familiar with their use suspect he wants to use them to tell the public more about what his investigation believes happened in the 2016 election.

It could also be a way for Mueller to fire warning shots at people he might want to target.

The 29-page document charging a dozen Russian intelligence officers in the hacking of the Democratic National Committee that was unveiled by the special counsel last month fits the description of a speaking indictment.

These indictments contain a high level of detail and go well beyond the constitutional requirements of laying out the essential facts of the offense charged. It also gives the defendant enough notice and specificity to mount a defense.

If Mueller uses the same strategy in the sentencing reports, this could be the way he releases many of his findings to the public without giving Trump, his lawyers or Acting Attorney General Matt Whitaker the opportunity to stop him. That was the conclusion many people reached from his most recent status report on Manafort.

It is worth keeping in mind that Mueller and his team can read the news and learned about the strategy Trump and his lawyers had adopted along with the rest of us.

President Donald Trump and his lawyers have made a strategic calculation that their fight against special counsel Robert Mueller is more political than it is legal.

They’re banking that the lead Russia investigator will follow long-standing Justice Department practice that a sitting president can’t be indicted, and that the only real threat to Trump’s survival is impeachment.

So long as that theory holds, Trump’s plan is to forcefully challenge Mueller in the arena he knows best — not the courtroom but the media, with a public campaign aimed at the special counsel’s credibility, especially among Republican voters and GOP members of Congress.

If Mueller issues “speaking indictments” in his sentencing reports on three of the most influential people in Trump’s campaign—Michael Flynn, Michael Cohen and Paul Manafort—he will demonstrate that he knows how to play that game as well. Both the obstruction of justice and conspiracy case will be put out to the public and, now that Democrats control the House, will be followed up with investigations, possibly leading to impeachment.

So hold on to your hats, folks. This could be the beginning of the end game.