It’s no coincidence that on the day Robert Mueller was scheduled to release memos to the court in anticipation of sentencing hearings for both Donald Trump’s personal lawyer Michael Cohen and his campaign manager Paul Manafort, the president’s congressional enablers decided to have another closed door session with former FBI Director James Comey. As right wing media headlines demonstrate, it was an attempt to provide a counternarrative to the findings of the special counsel.

“Comey’s confession: dossier not verified before, or after, FISA warrant,” by John Solomon

“Comey: Dossier Was Unverified Before and After FBI Used it to Obtain Spy Warrants,” at Daily Caller

They want you to believe that the only reason the FBI launched an investigation into the Trump-Russia conspiracy, leading to the appointment of a special counsel after Comey was fired, was because of the Steele dossier. Secondarily, they also want you to believe that the dossier is the only evidence Mueller has concerning the conspiracy, and finally that, because Comey suggested that it hadn’t been completely verified when he was fired, the dossier is nothing more than an effort by the Clinton campaign and Democrats to destroy the Trump presidency. If you believe all of that, then you’ll buy the notion that this whole investigation is nothing but a “witch hunt.”

Of course, none of that is true. The Steele dossier was only a small part of the evidence used to obtain a FISA warrant to monitor Carter Page, and as was reported in the Guardian, U.S. intelligence was actually slow to respond to warnings coming from our western allies about contacts between the Trump campaign and Russian operatives.

Britain’s spy agencies played a crucial role in alerting their counterparts in Washington to contacts between members of Donald Trump’s campaign team and Russian intelligence operatives, the Guardian has been told.

GCHQ first became aware in late 2015 of suspicious “interactions” between figures connected to Trump and known or suspected Russian agents, a source close to UK intelligence said. This intelligence was passed to the US as part of a routine exchange of information, they added.

Over the next six months, until summer 2016, a number of western agencies shared further information on contacts between Trump’s inner circle and Russians, sources said…

The Guardian has been told the FBI and the CIA were slow to appreciate the extensive nature of contacts between Trump’s team and Moscow ahead of the US election. This was in part due to US law that prohibits US agencies from examining the private communications of American citizens without warrants. “They are trained not to do this,” the source stressed.

“It looks like the [US] agencies were asleep,” the source added. “They [the European agencies] were saying: ‘There are contacts going on between people close to Mr Trump and people we believe are Russian intelligence agents. You should be wary of this.’

“The message was: ‘Watch out. There’s something not right here.’”

The reason the lies put forward by Trump and his enablers work with some people is that Robert Mueller hasn’t yet articulated the case he’s developing for a criminal conspiracy between the Trump campaign and Russia. Instead, we’ve gotten bits and pieces with each new revelation. When those are released, the media spends days speculating on the one area that was the focus of the finding and rarely provides a look at the big picture that is developing.

As an example of the big picture, following Friday’s release on the memos about Cohen and Manafort, the Washington Post tallied that the “Russians interacted with at least 14 Trump associates during the campaign and transition.” From the Cohen memo, we learn that the earliest of those came in November 2015 when “Cohen spoke with a Russian national who claimed to be a ‘trusted person’ in the Russian Federation offering the campaign ‘political synergy’ and ‘synergy on a government level.’”

Here is the former U.S. ambassador to Russia providing a definition of the word “synergy.”

“Synergy “ – a new euphemism for conspiracy and/or collusion!

I would submit that at some point we’ll learn of previous contacts because at least one Russian knew of Trump’s plan to run for president in January 2014, a year-and-a-half before he made his official announcement. 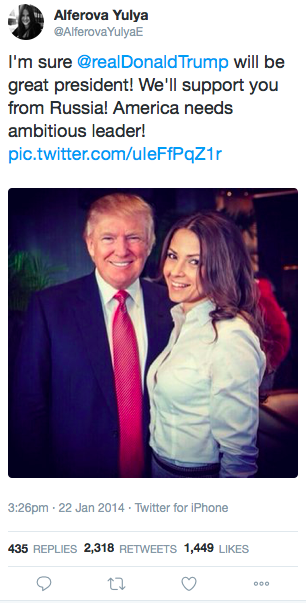 No one has done a better job of capturing the big picture of what we know about the Trump-Russia conspiracy than David Rothkopf on Twitter.

Rothkopf goes on to describe what Russia got out of the deal since Trump entered the White House.

But when it comes to a criminal presidency, let’s not stop with the Trump-Russia conspiracy.

The DoJ believes the president of the United States directed the commission of campaign finance felonies as a candidate. The NYT produced extensive and compelling evidence of serial tax fraud by the Trump family. The state of NY is investigate fraud in their charities.

The House will soon begin investigation of Trump money laundering. A case involving his violation of the Constitution’s emoluments clause is under way. In other words, as massive as the Russia scandal is, it might not be the biggest Trump scandal.

It would be bad enough to have a racist, sexist, ignorant, lying, lazy, delusional bully in the White House. But the truth is, he is also a criminal. That is based on what we already know. Now we await what the special counsel and Democratic House investigations will add to that big picture.