As I noted previously, Chris Hayes provided us with a useful list of how to evaluate the potential 2020 Democratic presidential primary candidates.

Whenever I find information that addresses one of those issues, I’ll pass it along. Today, that means looking at one way to measure “how they’ve conducted themselves in the past.” Since so many of the potential candidates are U.S. senators, their voting records in that body provide a useful tool. Elizabeth Warren has already announced the formation of an exploratory committee and it is very likely that these Democratic senators will join her:

The website Progressive Punch defines itself as “a non-partisan searchable database of Congressional voting records, from a Progressive perspective.” Here’s a screenshot of their page rating current senators: 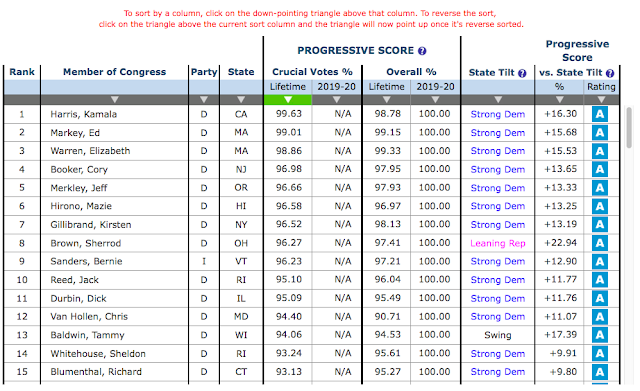 To learn how that web site identifies a progressive vote, you can find their explanation here. Other methods might mix up the order a bit, but I doubt they’d upend the top ten to any great degree. As an example of the list’s veracity, I’d point out that the Democrats who occupy the last two positions on the list are Joe Manchin and Doug Jones.

It is important to keep in mind that this list doesn’t tell us anything about the second item on Hayes’ list: what their platform calls for. Most notably, that is because Republicans have controlled the Senate since 2014 and so Democrats haven’t gotten votes on their agenda. We’ll have to wait for candidates to declare their intentions to run in the primary and publicize their platform in order to compare them on those grounds.

The one thing we can say with data like this is that the senate Democrats who are considering a run for the presidency in 2020 are among the most progressive in that body.