There is no doubt that Rep. Alexandria Ocasio-Cortez has become the media darling of the newly elected congress. Liberals adore her and right wing media has become obsessed with her—so much so that even the Onion got in on the act.

As part of its effort to provide the most comprehensive reporting possible on the freshman congresswoman, Fox News announced Wednesday the debut of a new premium television channel that will offer continuous, around-the-clock updates on Rep. Alexandria Ocasio-Cortez (D-NY). “For an extra $8.99 per month, you’ll have an all-access pass to the AOC Zone, which features wall-to-wall coverage of every word Ocasio-Cortez utters, as well as in-depth analysis of her wardrobe and any videos we’re able to dig up from her college days,” said Fox spokesperson Avery Mattison, adding that the new channel will include uninterrupted live footage of the 29-year-old representative every time she appears in public, along with nonstop commentary from a 12-person panel of experts. “We know our viewers will come to depend on this outlet for 24-hour coverage of AOC, which is why her tweets, Instagram posts, and her latest wacky policy proposals will appear in a ticker at the bottom of the screen.

Ocasio-Cortez has demonstrated that she is a master in the use of social media, which is often credited to the fact that she is young. The folks at Axios put together this chart demonstrating her so-called “Twitter power.” 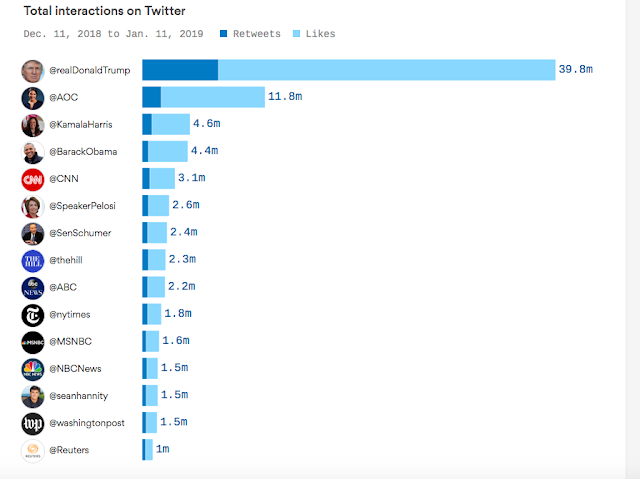 Because of that kind of success, the House Democratic Policy and Communications Committee has asked Ocasio-Cortez to share her expertise “on the most effective ways to engage constituents on Twitter and the importance of digital storytelling” with her congressional colleagues during a session on Thursday.

Engaging constituents is an important part of any politician’s job. But I cringe a bit when I see the development of memes like the one about getting #Ocasiowned pop up on Twitter in response to interactions like this:

Then we taxed the billionaire in town because he’s making tons of money underpaying the townspeople. https://t.co/Wcnn2sEgek

That is what makes Ocasio-Cortez so great at Twitter—it was the perfect comeback to a has-been Republican governor who still has dreams of occupying the White House.

But a tweet like that doesn’t change anything. Scott Walker’s followers still love his take on tax cuts (perhaps even more than they did before) and he will continue to spread that kind of nonsense in future political endeavors. In other words, it feels like Ocasio-Cortez “owned” Scott Walker, but I can guarantee you that his followers will be tweeting that he “owned the libs” (as they like to say) with his original analogy. Each side feels like they won something, but other than those good vibes, they don’t walk away with anything else.

Don’t get me wrong, there is nothing wrong with spreading those kind of good vibes. It helps keep morale up during a very difficult time, which is no small thing. But here’s my point: it is not a political strategy. You don’t “win” anything by scoring a verbal victory on social media. I’m going to give Ocasio-Cortez the benefit of the doubt and assume she knows that. If not, she’s in for a very rude awakening.