Thursday we woke up to the news that the president might be capable of at least a tinge of rational thought.

President Trump has insisted that he is not going to compromise with Democrats to end the government shutdown, and that he is comfortable in his unbendable position. But privately, it’s sometimes a different story.

“We are getting crushed!” Mr. Trump told his acting chief of staff, Mick Mulvaney, after watching some recent coverage of the shutdown, according to one person familiar with the conversation. “Why can’t we get a deal?”

It’s true, Trump is getting crushed in the polls for his tantrums over funding for a wall.

According to Kaitlan Collins, White House staff were caught off guard by Speaker Pelosi’s letter to the president suggesting that the State of the Union be delayed while the government is shutdown. Along with Trump, they recognize that the president is losing the public relations battle on this one. So someone came up with the bright idea of retaliating against Pelosi by canceling her trip to visit the troops in Afghanistan.

While Mick Mulvaney and his crew were working on a statement to that effect, the president decided to write a letter to the Speaker. 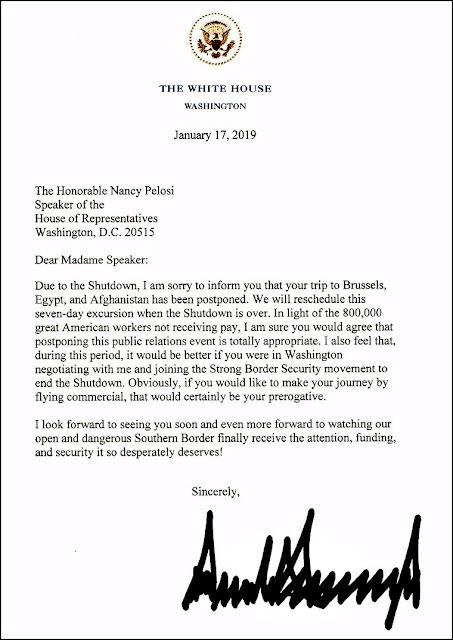 The spelling errors, random capitalizations, and the closing exclamation point are reminiscent of Trump’s “voice” on Twitter, so it’s clear he wrote this one himself.

Pelosi’s deputy chief of staff, Drew Hammill, responded with this on Twitter:

The CODEL to Afghanistan included a required stop in Brussels for pilot rest. In Brussels, the delegation was scheduled to meet with top NATO commanders, U.S. military leaders and key allies–to affirm the United States’ ironclad commitment to the NATO alliance. This weekend visit to Afghanistan did not include a stop in Egypt.

The purpose of the trip was to express appreciation & thanks to our men & women in uniform for their service & dedication, & to obtain critical national security & intelligence briefings from those on the front lines.

The President traveled to Iraq during the Trump Shutdown as did a Republican CODEL led by Rep. Zeldin.

The president’s move was so shocking that it left Sen. Mark Warner practically speechless.

KAINE: “I have been to Afghanistan on multiple occasions. It has never been announced that I’m going to Afghanistan. That never happens. Never… this guy is so unbelievably petty.” pic.twitter.com/yLhqlgxepd

But of course, Trump’s congressional enablers think that this kind of behavior from the president is perfectly fine. Until they send him to his room, the tantrums will continue.