I don’t usually pay a lot of attention to issue polling. That’s because most of the time the questions are asked out of the context of political messaging and many respondents are not well informed about the specifics. For example, people always like things like tax cuts, new programs, or government reforms. But when specific legislation is proposed, the conversation gets heated and opinions change.

However, no one does a better job of polling on the issue of health care than the Kaiser Family Foundation and they just published one that Democrats should pay close attention to when proposing further reforms.

On Medicare for All, when the question is framed to eliminate confusion, the good news is that 56 percent of Americans favor it either strongly or somewhat.

But notice that there is even stronger support for Medicare buy-in for those over 50 (77 percent), Medicaid buy-in for those who don’t have employer-provided coverage (75 percent), and something similar to Medicare as an alternative available to anyone (73 percent).

Anticipating some of the issues that would be raised by a national Medicare for All proposal, Kaiser found some interesting results. 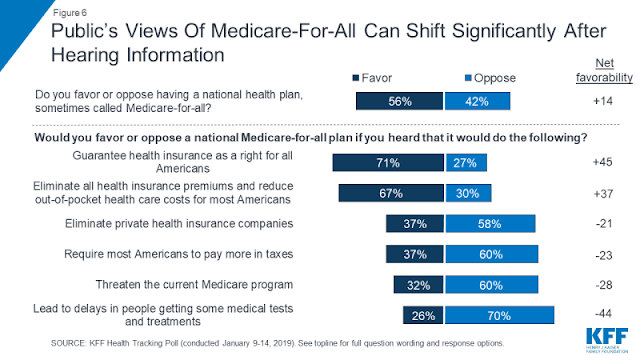 Let’s start at the bottom because KFF included two lies about Medicare for All that voters are sure to hear from Republicans: (1) it would threaten the current Medicare program, and (2) it would lead to delays in receiving care. Hearing either of those arguments causes support to plummet. But Democrats should keep in mind that any health care reform they propose will be subjected to lies, so it is simply a matter of being prepared to address them.

The suggestion that Medicare for All would require Americans to pay more in taxes also causes support to plummet. But it is unfortunate that KFF didn’t ask that question in a more responsible way, for example: Would you support a Medicare for All plan if it meant no premiums or out-of-pocket costs, but would lead to higher taxes? That would have provided us with some useful information.

The major issue Democrats would face in proposing a Medicare for All plan is captured by the question about eliminating private insurance. That also causes support to plummet, which is what Dylan Scott identified as the major barrier to single-payer health care.

In a great historical irony, the evident faults of employer-sponsored insurance are helping fuel a new appetite for Medicare-for-all, a single-payer system where everybody gets health coverage from the government. But the work-based system, for all its flaws, could also be the biggest barrier to enacting single-payer. Shifting 160 million people from the coverage they currently get through their jobs to a new government plan is a lot of disruption — and disruption, especially in health care, makes a lot of Americans nervous.

If Medicare-for-all is ever to become more than a campaign slogan, its proponents must solve that riddle.

Disrupting the health care of 160 million people is too big of a hurdle to clear in one leap, especially when it will be combined with major changes in who pays for what. Proponents will argue that outlining the benefits of such a change will win support, but the KFF polling is a good indication that that is not the case.

That is why Democrats would be smart to engage the journey towards Medicare for All by proposing one or more of the options above that garner over 70 percent approval from voters. As those programs grow and begin to replace private insurance, the hurdle to single payer gets smaller and much more manageable.