According to a report from Nonprofit Vote and the U.S. Elections Project, voter turnout in the 2018 midterms was the highest its been in over 100 years. 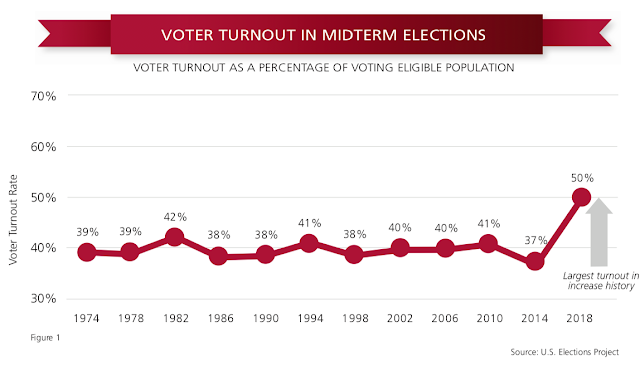 Despite that, vast differences remain between the states due to election policies that make it easier or more difficult to vote. The report referenced above reviews how the 2018 midterm elections were affected by three of those policy differences: (1) same day registration, (2) vote at home (by mail), and (3) automatic voter registration. This chart summarizes their findings. 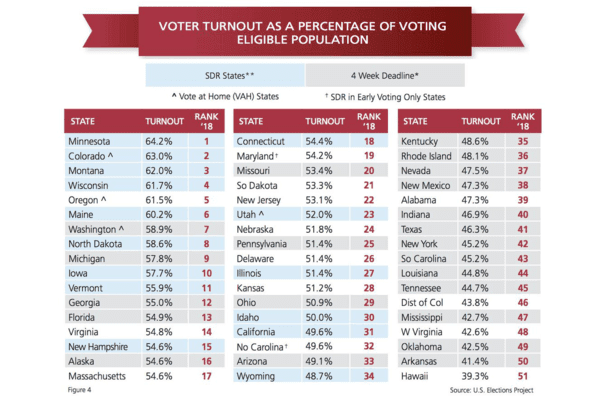 Specifically the researchers found that:

Obviously, there are more states that allow SDR and have been doing so for a longer period of time. Minnesota, Maine, South Dakota, and Wisconsin have had such policies in place since the 1990s and have consistently had higher voter turnout than the country’s average. Oregon became the first state to implement AVR in 2016. By 2018, 10 more states started doing the same. Thus, research on its impact has been minimal. As the bullet point above suggests, only four states have implemented full vote-at-home programs. An additional seven have a mail ballot option.

This data demonstrates that state policies with regards to registration and voting location have a significant impact on turnout. That is precisely why the Washington Monthly has been advocating for voting from home for several years now.

In response to the voter suppression efforts of Republicans, Democrats at the state level should do more than play defense. We now have sufficient data to prove that going on offense to remove barriers to voting improves turnout.