Most analysis of the first Democratic debate will focus on polls that either ask who “won” the debate, or compare the current percentage of support for a candidate to their previous standing. But given the fact that most Democratic primary voters are still considering several candidates, that kind of analysis will miss how the debate impacted their thinking.

To understand how all of the candidates were either helped or hurt by their debate performance, FiveThirtyEight teamed up with Morning Consult to compare their net favorability ratings (favorable minus unfavorable) before and after the debate. Here’s what they found. 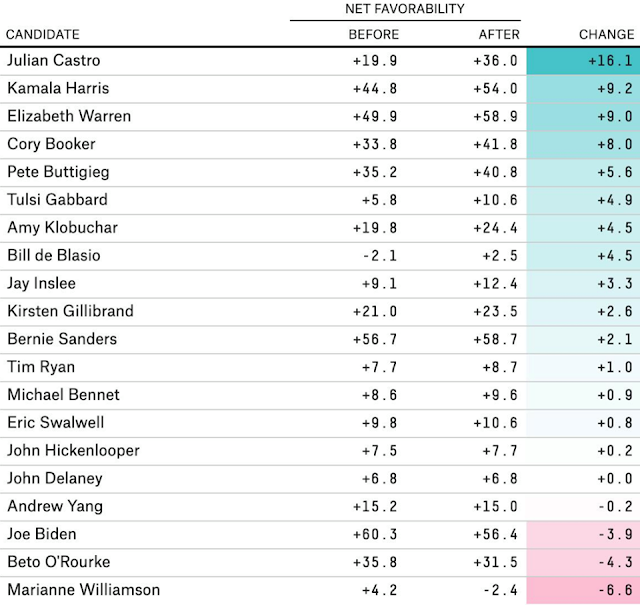 HuffPost and YouGov found similar results when they asked Democratic voters whether their view of each candidate improved or worsened after watching the debates. 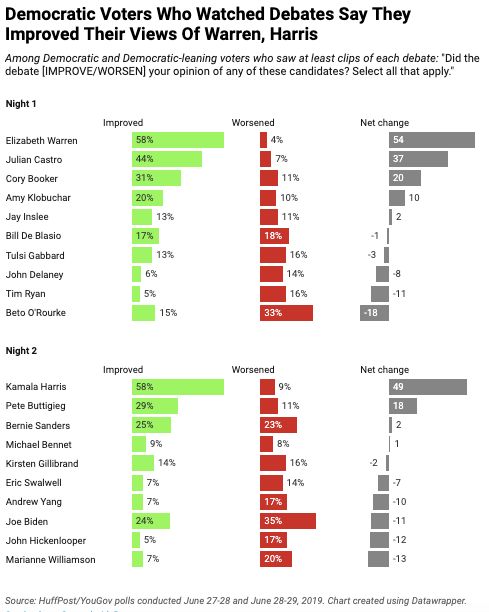 Both charts indicate that the candidates who improved their positioning the most are Warren, Harris, Booker, and Castro. In terms of the two leaders going into the debate, Biden seems to have lost ground and Sanders held steady.

Prior to the debate, here is how the race looked:

Zeroing in on the post-debate net favorability ratings from FiveThirtyEight, the top tier of candidates has now expanded to four, with Harris joining Biden, Sanders, and Warren. The second tier now consists of Booker, Buttigieg, and Castro. Unless O’Rourke, Klobuchar, or Gillibrand can conjure up a major surprise in the next few weeks to salvage their candidacies, they’re probably done—as is the rest of the field.

Pharmaceutical giants don’t have public opinion on their side. But they know how to stop Congress from passing laws most Americans want.