As my colleague Martin Longman wrote, the arrest of Jeffrey Epstein could portend trouble for a lot of powerful people, including Donald Trump. But for a group of the president’s strongest supporters, it is being seen as a day to celebrate the beginning of the end of the evil cabal that has been running the world.

You might remember that the whole Pizzagate conspiracy theory began in November 2016 because one of John Podesta’s hacked emails referenced a possible fundraiser for Hillary Clinton at Comet Ping Pong, a pizza parlor owned by James Alefantis. Users on the website 4Chan began speculating about the pizzeria being the headquarters of a child sex trafficking ring led by Clinton and Podesta. That eventually turned into a full-blown conspiracy theory that most of us thought ended when 28-year-old Edgar Maddison Welch walked into Comet Ping Pong and started shooting an assault rifle. Fortunately, no one was hurt.

The conspiracy theory lived on, however, and grew among the group known as Q-Anon into the idea that the same cabal that ruled the world also ran a massive sex trafficking enterprise where powerful people not only abused children, but engaged in satanic rituals. According to this group, Trump is secretly working behind the scenes to bring down the cabal, and every time someone is charged with sexually abusing a child, they see it as another metaphorical notch on his bedpost.

That makes the arrest of Jeffrey Epstein a sure sign that Trump’s plan is beginning to unfold. 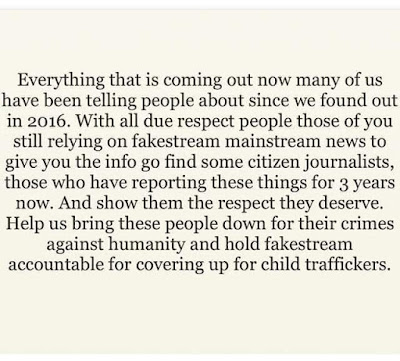 One Q-Anon follower on Twitter listed the 17 “Q posts” on Jeffrey Epstein. They’ve been talking about this guy for years now. In that world, a rumor about a pizza shop blowing up on the same day he’s arrested is proof of what they’ve been saying all along.

That is because, apparently, “pizza and [hot-]dogs are alleged pedophile codes for “young girls” and “young boys.” I kid you not.

Of course, to these folks, the arrest of Epstein will be followed by proof that it wasn’t just the Clintons who were involved in pedophilia and child sex trafficking. The Obamas were in on it as well. But just to prove that none of this is partisan, so was George H.W. Bush.

Demonstrating that these people don’t think small, there’s a piece floating around the internet titled, “Bush, Clinton, C.I.A, Cocaine, Crack and U.S. governmental drug dealing” which purports to link all of this to child abuse in the Catholic Church, Jerry Sandusky, the CIA’s global sex slave industry, Clinton Mena airport drug trafficking, Vince Foster’s murder, and the CIA’s global drug connection. In other words, it is almost every conspiracy theory dreamed up by these crackpots rolled into one.

While it is true that most of this stuff is limited to members of Q-Anon posting on social media and fake news sites, it represents the ugly underbelly of Trump’s supporters who are willing to go to these lengths to defend him and attack anyone who poses a threat. It should be lost on no one that these people (mostly men) are completely obsessed with pedophilia. Whether or not that is a projection of their own proclivities, it represents the ultimate form of domination and abuse.

Joe Manchin is once again playing the role of the...