Voting begins in the 2020 Democratic primary in about six months. The first debate has been held and the second will take place in three weeks. Reports on candidates’ fundraising for the second quarter have been submitted. So perhaps this would be a good time to take a look at the data that political scientists review to tell us where this contest stands right now.

The data point we hear the most about is polling. Here is the latest national average from Real Clear Politics. 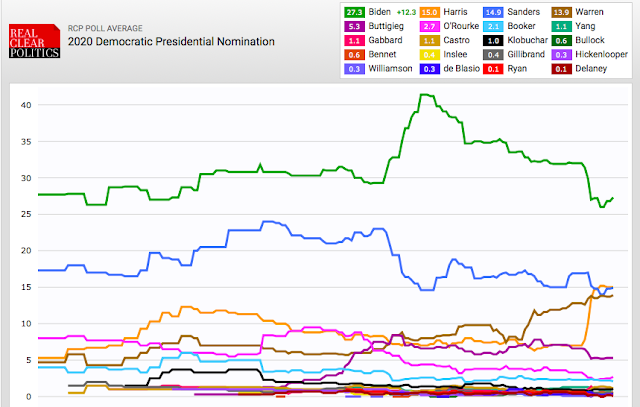 By this measure, Biden still leads the race, but he’s dropped quite a bit since his polling peak in early May. Biden’s entry into the race clearly took a bite out of Sanders’ support, which has leveled off since then. Warren has been slowing building, while Harris got a big bump from the first debate. That puts Sanders, Harris, and Warren in a three-way tie for second place right now. Buttigieg is holding steady for fifth place, while O’Rourke is fading into a tie with Booker.

Other than polling, pundits and political scientists pay a lot of attention to fundraising. Here are the numbers from the second quarter for the top five candidates.

We now have Q2 $$ press releases from all five of the Dems who’ve polled the best in recent months:

By this measure, Buttigieg leads the race and Harris brings up the rear. What surprised most people is that Warren raised slightly more money than Sanders.

While not as often cited, another take on the race is to look at endorsements. FiveThirtyEight tracks that measure. 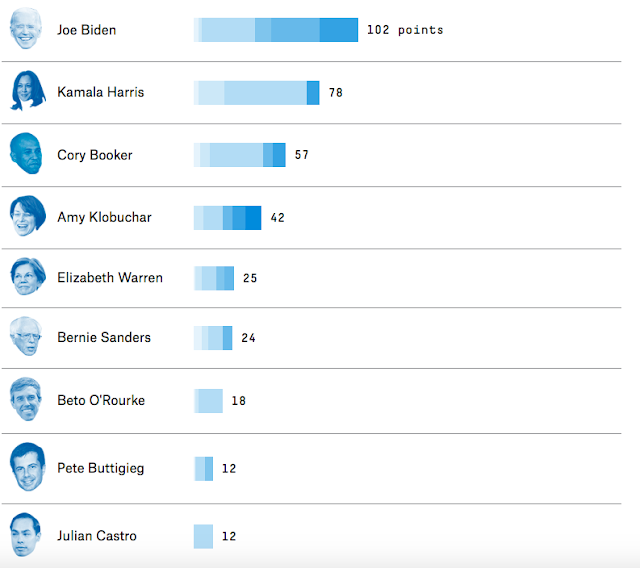 Once again, Biden leads this race, which shouldn’t come as a surprise, given that he is the former vice-president. The news here is that Harris and Booker have a sizable lead over all of the other top contenders. I’m pretty certain that Sanders’ response to the endorsement primary would be to say, “Bah, humbug, that’s just the establishment speaking.” And to a certain extent, he’d be right. This measure is the farthest removed from anything related to how people will actually vote. But it is probably similar to the betting markets in that it tells us where politicians are placing their chips. 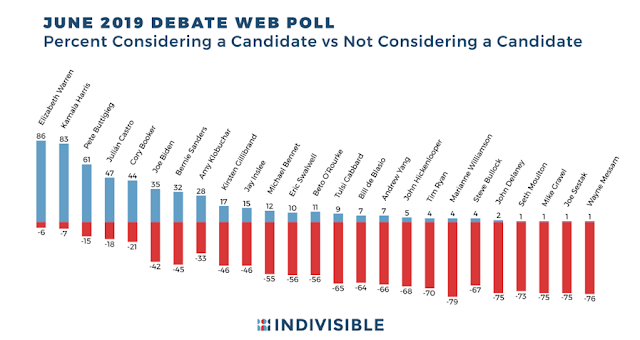 What we see is that activists within the Democratic Party strongly support Warren and Harris. Biden and Sanders poll well below those two candidates, as well as Buttigieg, Castro, and Booker. O’Rourke is pretty much out of contention.

The final measure happens to be the one that I think is most important at this point in the race. Morning Consult combines favorability ratings with name recognition. 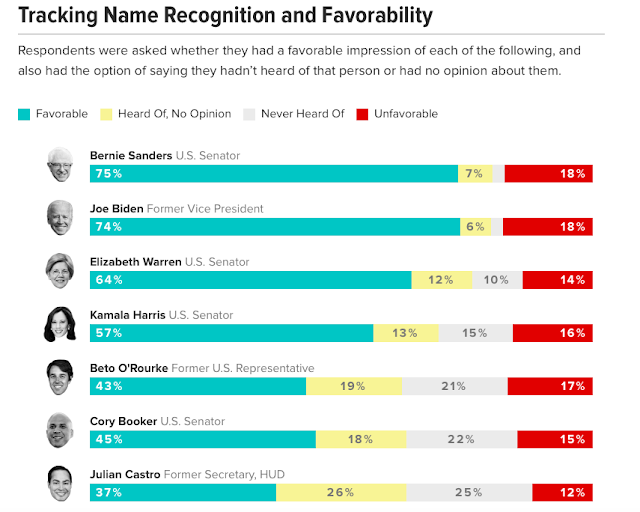 In this one, Sanders and Biden are in a veritable tie for first place. But they also have the highest unfavorable ratings with near-total name recognition. In other words, they have almost no room to grow. Elizabeth Warren is catching up when it comes to name recognition, but her unfavorables are a bit lower, so she has a bit of room to grow. Twenty-eight percent of respondents either had no opinion about Harris or had never heard of her. Combined with her 57 percent approval rating, she is positioned fairly well to be a contender. The same might be said for the other three, but they’re going to have to make a mark soon or be out of the contest.

With all of that said, it is safe to say that we currently have a four-way race between Biden, Sanders, Warren, and Harris. But there is still a lot of time before the voting starts and things could certainly change.