Last February, 23 year-old Shyteria (Shy) Shoemaker died after she collapsed from an asthma attack. The issue wasn’t that she lacked health insurance or couldn’t afford the co-pays, according to the Clarion Ledger.

Shoemaker, who was pregnant with her second child, was only an eight-minute drive from Trace Regional Hospital in Houston [Mississippi] when 911 was first dialed. But that didn’t matter since the hospital shuttered its emergency room in 2014.

The only ambulance in the county that night was almost a half-hour away.

More than an hour later, in a neighboring county, Shoemaker was pronounced dead.

A report published shortly after her death concluded that Mississippi had 31 rural hospitals at risk of closing—more than any other state in the country.

But it isn’t just Mississippi. Journalists from the Pittsburg Morning Sun and its parent company, GateHouse Media, analyzed financial data from nearly 2,200 rural hospitals across the country to determine which are losing money and which face potential closure. The results are alarming.

Rural America is in the midst of a deep and prolonged crisis that resulted in 106 hospital closures since 2010. Nearly 700 more are on shaky ground, and nearly 200 are on the verge of collapse right now…

Hospitals faring the worst are mainly in states that refused to expand Medicaid.  Those states account for 77 of the 106 closures over the past decade. They also are home to a greater percentage of money losing facilities and lower collective profit margins.

Here is a map identifying where the rural hospital closures have occurred. 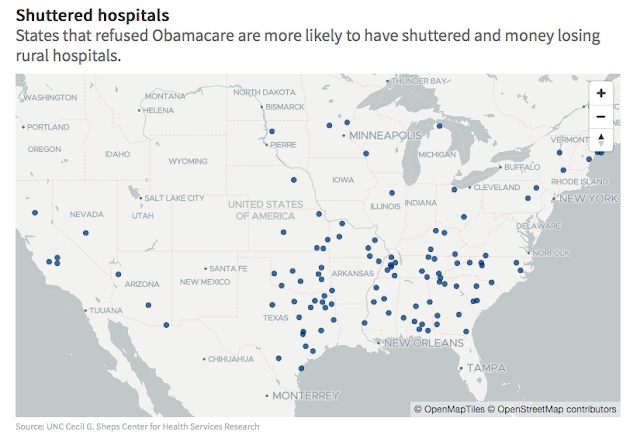 The factors that tie these rural communities together speak to the fact that a refusal to accept Medicaid expansion only exacerbated existing problems, like high rates of poverty, older populations, increased health risks, and a lack of investment by state and local governments. Hospitals are struggling financially because all of those factors combined lead to higher levels of uncompensated care.

Uncompensated care burdens fell sharply in expansion states between 2013 and 2015, from 3.9 percent to 2.3 percent of operating costs. Estimated savings across all hospitals in Medicaid expansion states totaled $6.2 billion…Conversely, if the 19 states that chose not to expand Medicaid were to adopt expansion, their uncompensated care costs also would decrease by an estimated $6.2 billion.

Beyond a refusal to expand Medicaid, the Trump administration has broadcast its willingness to grant waivers that allow states to sharply limit eligibility for Medicaid, such as imposing work requirements. The Center on Budget and Policy Priorities documented that approving such waivers “threatens to reverse a meaningful share of the recent drop in uncompensated care costs.” That will make rural hospitals even less financially viable.

As Democrats debate the best strategy for moving from Obamacare to universal health care coverage, it is important to keep Republican priorities in mind. Most red states refused Medicaid expansion, which left millions uninsured. Now the Trump administration is doing everything it can to exclude people from coverage, including the approval of waivers and fighting in court to have the entire law declared unconstitutional.

When those efforts compound the challenges faced by rural hospitals, it can become a matter of life and death for people like Shy Shoemaker. In addition, hospital closures contribute to the downward spiral that has enveloped many rural communities, with jobs lost, more residents moving out, and the attraction of fewer businesses to the area.

Perhaps Trump should expand his horizons to take note of what is happening in places like Houston, Mississippi—instead of being so obsessed with Baltimore.