Rachel Bitcofer is the assistant director of the Judy Ford Wason Center for Public Policy at Christopher Newport University in Virginia. She developed an election forecast model for the midterms that, in July of 2018, predicted that Democrats would pick up 42 seats in the House of Representatives, which was close to perfect. By way of comparison, at around the same time, Cook Political Report listed 180 seats as “solid” for Democrats, with 12 likely/lean and 3 “toss-up or worse.”

You might ask what Bitcofer knew that others didn’t. Here is how she explained it last year (emphasis mine).

The way we understand the electorate needs to be reexamined for the polarized era. The traditional view sees the electorate as an ocean that flows from left to right depending on the movement of Independent voters from Republican to Democratic party candidates, which is largely predicated on major factors such as how the economy is performing and whether there are any large, salient issues moving voters toward one party or the other. Take the aforementioned midterm effect, for example. The midterm effect is the longstanding tradition of the president’s party losing seats in the subsequent congressional elections two years later, midway through the president’s term. The midterm effect is really a referendum effect and it supposedly measures the amount of “buyer’s remorse” the electorate, particularly Independents, have after the preceding cycle’s presidential election. This may well have been the case in earlier decades, when partisans were more ideologically heterogeneous, Independents fewer in number, and “Reagan Democrats” still roamed the Earth. But my preliminary analysis of voter files indicates that the modern midterm effect may be misunderstood. The data suggests that the rise and fall of the incumbent party’s fortunes may not be driven by the movement of Independent voters from one party to the other, but instead, by the entrance (and exit) of partisan voters who are activated or deactivated by negative partisanship.

In many respects, Bitcofer comes down on the side of voter mobilization over persuasion as the critical factor in elections dominated by negative partisanship.

During an interview with Paul Rosenberg for Salon, Bitcofer explained what happened in 2018.

Democratic turnout, particularly in midterms, is so bad that with the giant surge the Democrats managed to put together, what they were able to do is come close to matching Republican turnout. Which is good,  that’s a major victory. But in many districts, especially where the candidates were focusing on being moderate, the Democratic turnout still underperformed its potential, and still underperformed turnout among Republicans, according to this analysis that I’ll be releasing after Labor Day.

But the turnout surge among independents — new independents, not ones who voted in 2014 — was so large combined with that turnout surge of Democrats to flip the district. If Republicans had also voted for Democrats, then these margins by which Democrats won would be much larger.

Rather than generalize about the Midwest states that put Trump over the top in 2016, she makes some important distinctions.

Ask anyone, and they will describe Trump’s 2016 Midwestern triumph as a product of white, working class voters swinging away from the Democrats based on the appeal of Trump’s economic populist messaging. Some will point to survey data of disaffected Obama-to-Trump voters and even Sanders-to-Trump voters as evidence that this populist appeal was the decisive factor. And this is sort of true. In Ohio, Trump managed the rare feat of cracking 50%. Elsewhere, that explanation runs into empirical problems when one digs into the data. Start with the numerical fact that Trump “won” Pennsylvania, Wisconsin, and Michigan with 47.22%, 48.18%, and 47.5% of the vote, respectively, after five times the normal number in those states cast their ballots for an option other than Trump or Clinton. This, combined with the depressed turnout of African Americans (targeted with suppression materials by the Russians) and left-leaning Independents turned off by Clinton (targeted with defection materials by the Russians) allowed Trump to pull off an improbable victory, one that will be hard to replicate in today’s less nitpicky atmosphere. Yet, the media (and the voting public) has turned Trump’s 2016 win into a mythic legend of invincibility.

With all of that in mind, Bitcofer has rolled out her initial projection for the 2020 presidential race. Here’s what it looks like. 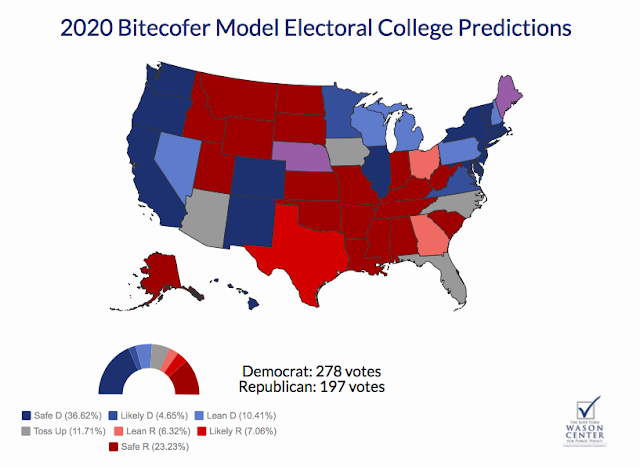 She is already predicting a Democratic victory in the Electoral College with 278 votes, primarily because the states of Pennsylvania, Michigan, and Wisconsin will flip to blue. There are still four states that Bitcofer lists as toss-ups: Arizona, Iowa, North Carolina, and Florida. But even if Trump were to prevail in all four, Democrats would have already won the election.

To back up her claims, Bitcofer points to the campaign strategies of Beto O’Rourke and Stacey Abrams in 2018.

In Texas and Georgia, O’Rourke and Abrams both carried the votes of independents, whereas in Missouri and Indiana, where [incumbent senators] Claire McCaskill and Joe Donnelly positioned themselves much more in the Blue Dog camp in terms of issues positions, both of them lost independents.

So you might think, “Why is that? If one group of candidates took more liberal issue positions, why did they win over independents?”  It seems counterfactual, and the reason is what mattered was turnout. O’Rourke and Abrams carried independents because turnout surged, with different independents showing up to vote, motivated by the  targeting strategy deployed by those campaigns, which were run under my suggested model rather than the old playbook that used to work back in the ’90s and ’80s.

What is most interesting to me is that some on the far left tried to paint O’Rourke and Abrams as “centrists,” while Bitcofer accurately notes that they took “more liberal issue positions” than candidates like Claire McCaskill and Joe Donnelly. So the strategy her model points to doesn’t require candidates to be extremists (ie, ‘socialists’), it simply requires candidates to run as bonafide Democrats who don’t shy away from the party’s positions.