One of the most important and least-known provisions of Obamacare was actually the brainchild of former Senator Al Franken. When health care reform was being debated in the Senate, he offered an amendment to include something called a medical loss ratio (MLR). It requires insurance companies that cover individuals and small businesses to spend at least 80 percent of the premiums they charge on patient care. For companies that cover large groups, the MLR is raised to 85 percent.

That limits private insurers to spending 15-20 percent of premium dollars on everything else, including administration, marketing, and profits. They are further required to report annually on how their premium dollars were spent, and if they exceeded those limits, pay a rebate to their customers.

Beginning in September, those rebates are about to be issued. Reporting for the Kaiser Family Foundation, Rachel Fehr and Cynthia Cox note that, for 2019, insurers will be issuing a total of at least $1.3 billion in rebates, exceeding the previous record high of $1.1 billion in 2012. The specific amount of each rebate will vary depending on both the market and the provider. Here is what MLR rebates have looked like over time. 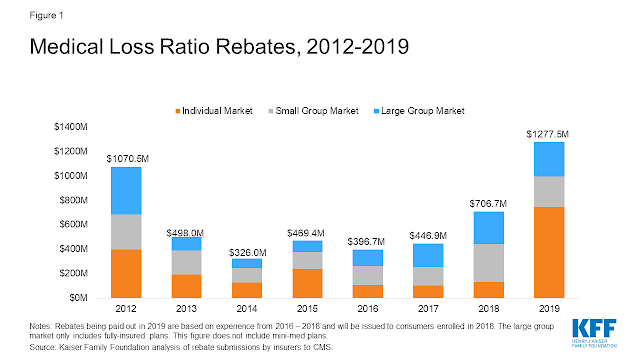 Fehr and Cox explain why the 2019 rebates are so large, especially in the individual market (the group that was mostly targeted by Obamacare).

[I]n 2016, insurers in the individual market were operating with significant losses on average, but by 2017 financial performance in the market had begun to stabilize as premiums rose. Insurers in 2018 were highly profitable and arguably overpriced, which is why rebates are so large.

In other words, as profits rise for private insurance companies, Obamacare requires that they rebate that money to their customers. So if you happen to be among the majority of people who don’t get a check in the next couple of months, it is because your insurance premiums were priced to meet the MLR standards.

It is also important to note which political party doesn’t support this provision. Louise Norris fills us in on that.

While the MLR provision has obvious appeal to consumers, it isn’t universally loved– and was among the ACA provisions in Republicans’ crosshairs as they attempted to repeal the ACA in 2017. The Senate’s 2017 Better Care Reconciliation Act (BCRA) would have eliminated the federal requirement that insurers spend the majority of premiums on health care. (That measure did not pass the Senate when it was introduced as a substitute for H.R. 1628 in July 2017.)

As 10 Democratic candidates gather on the debate stage in Houston on Thursday, one would hope that—regardless of their proposals for how to expand health care coverage—they would take a moment to let the viewing public know about this Obamacare provision. I suspect that the millions of people who receive a check from their insurance company in the coming weeks will have no idea why it arrived—or that it is the result of Democratic support for Obamacare. While Bernie Sanders is right that no one loves their insurance company, making their hunger for profits the villain of the story without mentioning this provision borders on malpractice.

To the extent that Democrats want voters to trust them on further health care reforms, a good place to start is to point out what the party has done in the past. That would include everything from Medicare and Medicaid to Obamacare. Republicans have hammered home the idea that government regulations are bad, not just for corporations, but for working Americans. One way to combat that lie is to point to things like the MLR in Obamacare. If voters don’t know how Democratic initiatives are working, they aren’t likely to trust and support Democrats.